I write today with the sad news of the death at the age of 93 of one of the more important and controversial Catholic theologians of our time, Hans Küng.

I met Küng, who was Swiss, just briefly, in the 1970s, when I was a college student at Harvard, in Cambridge, Massachusetts, and he was invited by the Harvard Divinity School to give a lecture there.

I was struck then by Küng’s confident presence and manner. He presented his rather progressive, modernist views in a self-assured way, seemingly taking for granted that he would receive enthusiastic support for his positions from the divinity students of that place and time, most of them non-Catholics. And he did receive that enthusiastic support. I was troubled by, and opposed to, what I took to be his too optimistic eagerness to “update” the Catholic faith in keeping with the “right-thinking” Western intellectual life of the mid-20th century. Yet I remember being impressed by the strength of his character: he drew all eyes to him immediately when he entered the room to begin his talk, seeming to dominate the room effortlessly. And I felt a certain respect for a man who would dare to speak about Christ and the Church in a place that already in the 1970s was so extraordinarily secular that any conversation about Christianity had already become almost taboo. In this sense, he was brave to speak in a serious and confident way about questions of Christian faith.

Years later, when, in Rome, I met his German colleague of the 1960s, Joseph Ratzinger, I was struck by the fact that Ratzinger seemed so much less extroverted, less dominating, less physically imposing, though I found Ratzinger’s thought, in its careful, crystalline intricacy, much more compelling, more attractive, more persuasive, than Küng’s thought.

Now Küng has departed from this world, a world we refer to in various prayers as “this valley of tears.”

May eternal light shine upon him, and may he rest in the peace of the Lord.

Below is a report on Küng’s life and thought from The Pillar, a relatively new Catholic news website that seems to be producing a steady stream of thoughtful reports on the life of the Church in our time. —RM 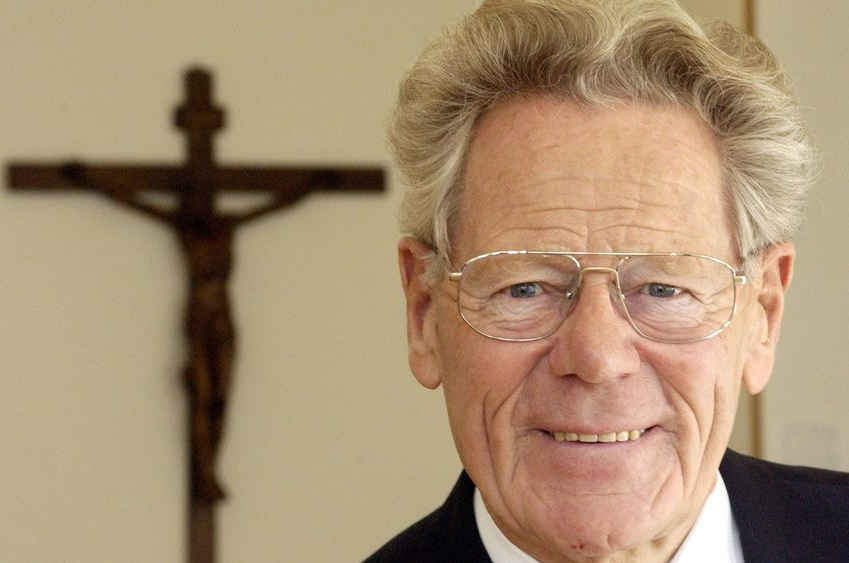 Above, Swiss theologian Hans Küng. Küng died this morning at the age of 93. He was at first a fellow Catholic priest, collaborator and friend of Fr. Joseph Ratzinger. Ratzinger eventually left the academy, the academic world, to become a bishop, cardinal and finally Pope Benedict XVI. Photo Credit: Marijan Murat/ picture-alliance/ dpa (link)

Fr. Hans Küng, an influential Swiss Catholic priest and theologian who was forbidden from teaching theology because he dissented from Catholic doctrine, has died. The priest was 93 years old.

The priest was a contemporary of Joseph Ratzinger, later Benedict XVI, with whom he had a relationship of frequent public disagreement, especially as the men embarked on radically divergent theological paths, engaged in pointed theological disputes, and after official condemnation of some of Küng’s theological work.

Küng’s death was announced by the German bishops’ conference on April 6.

Born in 1928, Küng was ordained a priest in 1954, and was shortly thereafter appointed a professor of theology at the influential German University of Tübingen.

Like Ratzinger, Küng was an influential theological expert at the Second Vatican Council. During the Council, Küng, who proposed some models of Church reform that were adopted by the Council Fathers, became a prominent media figure and a well-known theologian, especially because he was interviewed frequently by English-language media.

But theologians at the Council criticized Küng privately. In his diaries, Fr. Henri de Lubac lamented the priest’s “juvenile audacity” and “incendiary, superficial, and polemical” approach to theological engagement.

After the Council, Küng helped to secure a faculty position at Tübingen for Ratzinger, and the men were initially friendly.

But Küng’s rejection of Church doctrine was made explicitly manifest in 1968, when Humanae vitae was promulgated, and the theologian joined those opposing its teaching, which ruled out the licit use of artificial contraception and reiterated the Church’s holistic teaching on human dignity, sexuality, and the link between the unitive and procreative potential of marital love.

Ratzinger, then a colleague of Küng’s, supported the document and criticized those who dissented from it.

In 1971, the bishops’ conference of Germany denounced a book by Küng that seemed to reject the doctrine of papal infallibility, which was declared definitively by the First Vatican Council.

In 1975, the Congregation for the Doctrine of the Faith said of Küng’s theological work that “some views are found which in different degrees oppose the Catholic Church’s doctrine which must be professed by all the faithful.”

In addition to his rejection of papal infallibility, “he does not adhere to the true concept of the authentic Magisterium by which the Bishops are in the Church ‘authentic teachers, that is, teachers endowed with the authority of Christ who preach to the people committed to them the faith they must believe and put into practice,’’ the Vatican said.

“Also the view already suggested by Prof. Küng in the book Die Kirche(“The Church”) according to which the Eucharist, at least in cases of necessity, can be validly consecrated by baptized persons who are not ordained priests, cannot be reconciled with the doctrine of Lateran Council IV and Vatican II.”

The Vatican at that time admonished Küng not to teach the positions identified as false by the CDF, and urged him to “harmonize, after an appropriate period of deep study, his own views with the doctrine of the Church’s authentic Magisterium.”

But in 1979, Küng’s work was found by the Congregation of the Doctrine of the Faith to contain persistent heretical elements, and the priest was censured.

“In his writings, has departed from the integral truth of Catholic faith, and therefore he can no longer be considered a Catholic theologian nor function as such in a teaching role,” the CDF concluded. The priest was forbidden to teach theology in any Catholic institution.

Küng continued to teach as a professor of “ecumenical theology” at Tübingen.

Although the priest’s work was found to contain persistently heretical elements, he was not formally declared to be excommunicated, the prescribed canonical penalty for heresy.

In addition to his rejection of papal infallibility, Küng was a staunch critic of the Church’s teaching and discipline on sexuality and clerical celibacy.

In later life, Küng blamed the sexual abuse scandals of the early 2000s and the shortage of priestly vocations in dioceses in the West on clerical celibacy.

In 2010, he insisted that “Compulsory celibacy is the principal reason for today’s catastrophic shortage of priests, for the fatal neglect of eucharistic celebration, and for the tragic breakdown of personal pastoral ministry in many places.”

Commenting on the sexual abuse crisis, he said that “celibacy is not the only cause of such misconduct. But it is the most important and structurally the most decisive expression of an uptight attitude of the church’s leadership towards sexuality in general, an attitude that is also revealed in the birth control question and in other related issues.”

“Abolition of the celibacy rule, the root of all these evils, and the admission of women to ordination. The bishops know this, but they do not have the courage to say it in public.”

Küng was a fierce critic of Ratzinger’s administrative and theological leadership, even while periodically affirming the genuine faith of his former colleague. He referred to Ratzinger’s leadership as “Roman Inquisition” and blamed him for the global cover-up of clerical sexual abuse.

In 2005, however, the two men met in Rome for a conversation the Vatican described as “friendly,” and they spoke of another with some degree of cordiality.