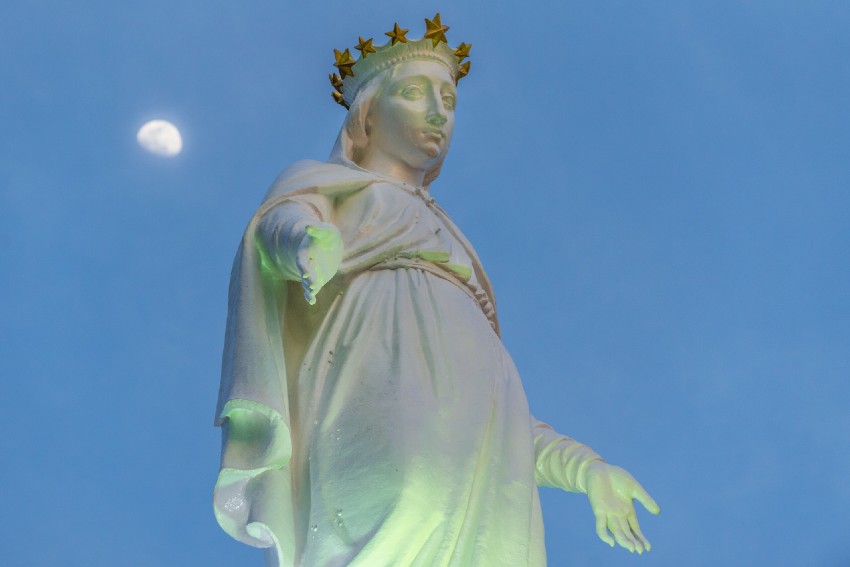 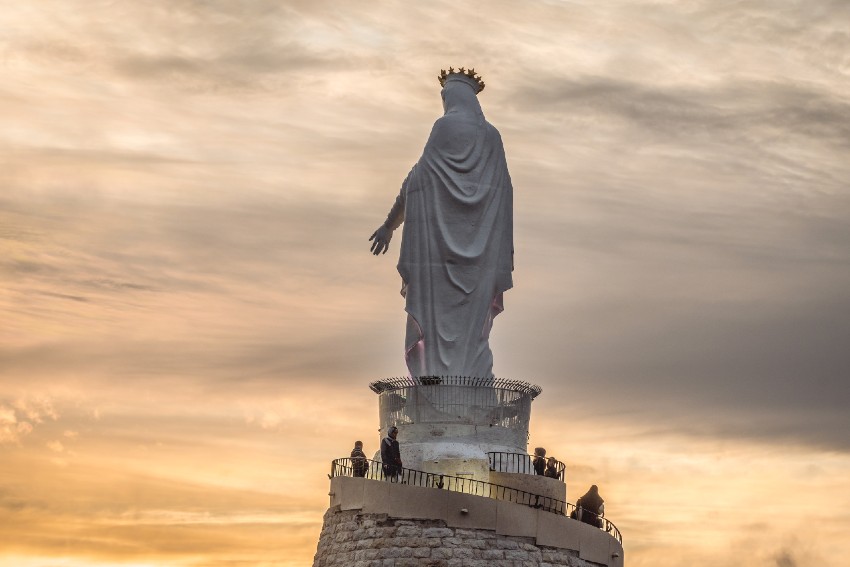 Two views of the statue of the Virgin Mary which rises on a hilltop above the coastline of Lebanon, called “Our Lady of Lebanon” (link). The statue is located at the Shrine of Harissa. The shrine is visited daily by hundreds of Lebanese, Christians and Muslims alike. Thus, Mary is for many a true force for unity in Lebanon, in the face of many challenges in recent years

“The head of the Maronite Church and Patriarch of Antioch and All of the East, His Beatitude Cardinal Bechara Boutros Al-Rahi, will make his first-ever pastoral visit to the United Kingdom from 7-14 January 2023, to meet Christian Church leaders and members of his Church based here. The Patriarch faces the challenging task of guiding and comforting his nation at a time of unprecedented political turmoil in Lebanon.”—A Christmas Eve (December 24, 2022) report on the website of the British charity “Fellowship and Aid to the Christians of the East” (FACE) (link)

“Lebanon deserves exceptional attention, because the entire Middle East looks to Lebanon as a message for the future, and from here comes the necessity of preserving the Lebanese national identity. If the situation develops positively, the Lebanese national identity will be reflected in the region. A strong and united Lebanon can set an example for the entire Middle East, with its Christians and Muslims, in the service of the common good for all, and this is the truth of the Lebanese call. We hope that this role will be played again in the future and it is easy to say that Lebanon is a message, but we must work together so that this message becomes a tangible reality.” –Statement of the Holy See’s Secretary for Relations between States, Monsignor Richard Paul Gallagher, the #3 man in the Vatican, February 1, 2022, during a January 31-February 4 trip to Lebanon (link)

The leader of the Maronite Catholics of Lebanon, His Beatitude Cardinal Bechara Boutros Al-Rahi, 82, will be making an important, week-long trip to the United Kingdom in less than two weeks, from January 7 to 14. (link)

This visit will be an important step in the Patriarch’s continuing effort to help Lebanon emerge from a multi-year period of economic and political crisis, and to support the Maronite Christians of Lebanon, who continue to leave the country in large numbers.

In the light of this visit of the Patriarch to the UK, and seeing that the year 2023 is drawing to a close, I wished to take this opportunity to bring to the attention of readers, as the year ends, an initiative we have been working on since August 4, 2020, when a massive explosion in the harbor of Beirut sent a shock wave through dozens of blocks of the city of Beirut, killing more than 200 and leaving tens of thousands homeless.

Called “Friends of Lebanon,” we launched the initiative on the very day of the explosion, August 4, 2020.

For the two and a half years since, we have been writing about Lebanon, and working with a group of dedicated young people in Lebanon to try to help in whatever way we can so that the country may return to stability and prosperity.

This year, we made two trips to Lebanon, and continued to publish our monthly “Lebanon Report” (link) on the issues facing Lebanon and the entire region.

We hope to continue this work during 2023, leading up to an event in September — perhaps as at the shrine of Harissa, under the protection of the Virgin —which will bring together many of the country’s Catholic and Orthodox leaders, and others, to discuss common projects we all may carry forward together.

I would like to ask for your help and support for this initiative, which is a response of urgent calls made by Pope John Paul II, Pope Benedict XVI, and Pope Francis, to support the people of Lebanon (link).

The project is an initiative of the US 501c3 non-profit which publishes Inside the Vatican magazine wand seeks to “building bridges” of unity between Catholics and Orthodox. (Therefore, all donations are tax-deductible under US tax law.)

In Lebanon, there are Maronite, Melkite and Latin-rite Catholics, as well as many different Orthodox communities, and so there is a great opportunity in Lebanon for Catholics and Orthodox to work together in a country which is of key importance to the entire region, and, indeed, for the whole world (see the remarks of Vatican diplomat Archbishop Richard Paul Gallagher above or here.) See also: link.

I am therefore inviting you to become a “Friend of Lebanon” and join us in our work in support of Patriarch Al-Rahi, of the Maronite Catholics of Lebanon, and of the entire country of Lebanon, during 2023. To do so, click here: link

Thanks to all of you who have generously supported our magazine, and this letter, with subscriptions and donations, and thank you for considering this request to support our “Friends of Lebanon” initiative.

Thank you, and a blessed Christmas season to all.—RM

P.S. If you have friends who would like to receive this free letter, please feel free to sign them up, or send the email addresses to me, and we will include them on our list.

Donate to Support Friends of Lebanon 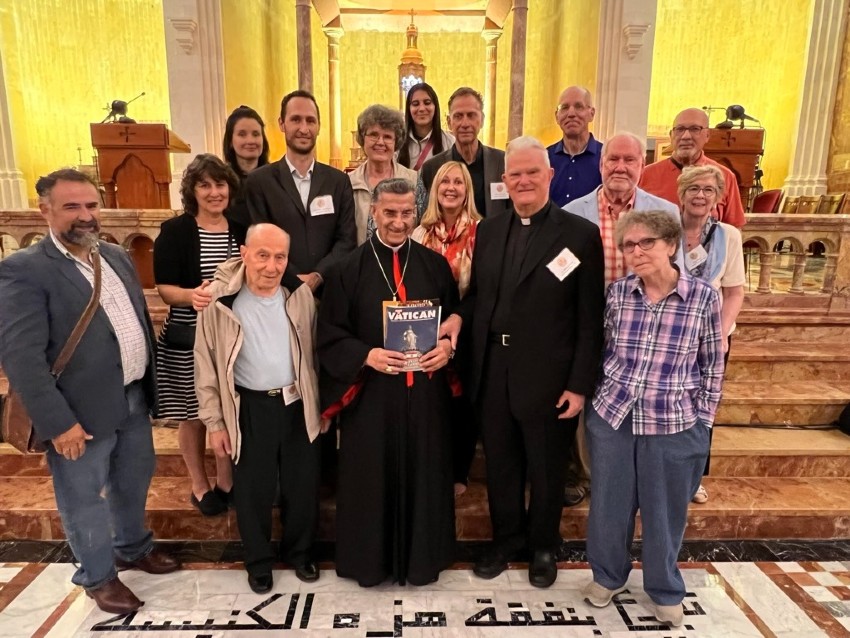 A delegation of our “Friends of Lebanon” initiative was received in Lebanon by Patriarch Al-Rahi on September 17 this year. The Patriarch is holding a recent issue of our Inside the Vatican magazine which we presented to him because it has on the cover an image of Our Lady of Lebanon, which is a white statue which rises from the top of a hill outside of Beirut, and overlooks the entire coast of the country

The head of the Maronite Church and Patriarch of Antioch and All of the East, His Beatitude Cardinal Bechara Boutros Al-Rahi, will make his first-ever pastoral visit to the United Kingdom from 7-14 January 2023, to meet Christian Church leaders and members of his Maronite Church based here.

At a time of unprecedented political and economic turmoil in Lebanon, and no President appointed, Cardinal al-Rahi, as head of the largest Christian denomination in the country, has become its leading voice, speaking up especially for the 80 per cent of the population that has been pushed into poverty, as well as expressing his concerns for the survival of Christianity in the Middle East.

These issues and the concerns of members of the Maronite Church, both in Lebanon and across the globe, will be among the topics Cardinal al-Rahi will address during his talks with Cardinal Vincent Nichols, Archbishop of Westminster; the Rt Revd Justin Welby, Archbishop of Canterbury; Cardinal Michael Fitzgerald, Patron of Fellowship and Aid to the Christians of the East; the Most Revd Bernard Longley, Archbishop of Birmingham; the Maronite parish in London; Church leaders in the Midlands; British Government ministers; British parliamentarians; and representatives of the British and foreign diplomatic corps.

The Maronite Church, whose origins date back to the early 4th century, is in full communion with the Bishop of Rome as a sui iuris particular church. Maronites number approximately 4 million in the world, of which roughly a quarter live in Lebanon, where they constitute up to 30% of the national population, and three-quarters live outside the Middle East, mostly in Canada, Australia, USA, UK, France, Argentina and Brazil.

As head of the largest religious group in Lebanon, His Beatitude Cardinal Al-Rahi is shepherd to his people, as well as a prophetic and resonant moral voice to the nation, within the context of the distinct political system of confessionalism which has been balancing power between Christians, Muslims and Druzes since the setting up of the Republic of Lebanon in 1943.

The Patriarch faces the challenging task of guiding and comforting his nation at a time of unprecedented political turmoil in Lebanon, when paralysis of government and economic crisis have pushed most of the population below the poverty line and undermined the fabric of society.

The Patriarch’s visit to the UK will include pastoral, ecclesial, ecumenical and patriarchal engagements.

Lebanon’s vocation is as a land of tolerance and pluralism, an oasis of fraternity where different religions and confessions meet, where different communities live together, putting the common good before their individual interests. Let us neither desist nor tire of accompanying the Lebanese people in this plea, imploring heaven for that peace which men and women find so difficult to build on earth. (Pope Francis) 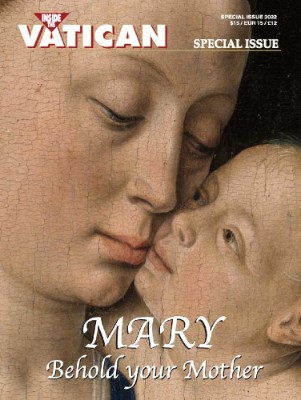 “Got your special issue today on Mary. I’ve been a subscriber since the beginning and it’s the best issue ever!” —Paul