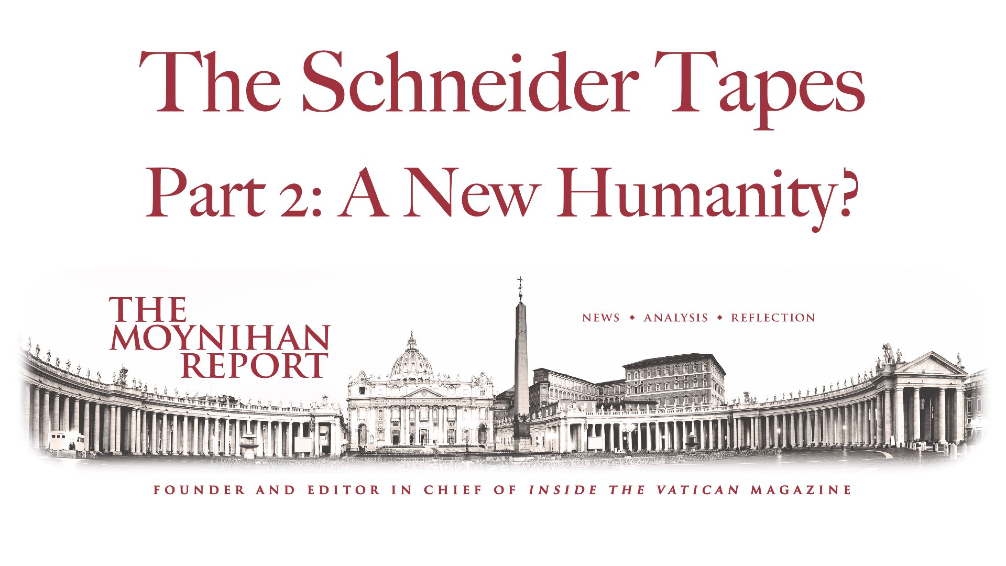 We have posted the 2nd of 10 tapes from my late October interview with Bishop Athanasius Schneider, 60, of Astana, Kazakhstan, and it is now available on Rumble (link) and YouTube (link).

Click the video below for the second part of the interview in which Bishop Schneider reflects on the present effort to transcend the bounds of the human through technology.

And, by the way, today also happens to be my birthday, Feast of St. Josaphat (1580-1623) who worked for the unity of the Eastern Orthodox and Catholic Churches. (In this context, all gifts to support our continuing work for Church unity, and in interviews like The Viganò Tapes and The Schneider Tapes, and other interviews we are planning for this winter, would be gratefully received(!)… You may support this work by clicking here). —RM

Robert Moynihan: Well, in modern times, this idea, that the essential purpose of man is to glorify God, has slightly been shifted, to glorifying man. This is called humanism.

In some way, this is the central distinction between the Christian view of the world — glorifying God — and the modern secular humanist view — glorifying man.

Bishop Athanasius Schneider: Of course, this is evident.

So we see, as you mentioned correctly, since the so-called Renaissance time, and then more stressed in the 18th century of the so-called Enlightenment and then promoted officially and mainly by the Freemason societies in this public life to put man into the center, and that man should be the judge of truth, and of what is good and what is evil.

And then man should be adored, instead of God.

So God is becoming in the modern society, therefore, an obstacle.

God is becoming an obstacle completely, since God can be only an idea for someone.

But God is concrete and he incarnated himself.

And, therefore, Jesus Christ as true God and true man is, for this anthropocentric, humanistic, and especially Freemasonic ideology, the main obstacle — Jesus Christ as God and man, who is present here on earth since his incarnation, in the Church and the sacraments, and in the crosses and all the signs.

These had to be removed and to replaced by a new religion which is the religion of man, to adore man.

And this was the core, the essence, of the sin, first of the fallen angels, to adore themselves and not God, and then, especially, also the core of the sin of Adam and Eve.

They wanted to decide.

We are deciding what is good, and not God.

And we are doing something independent of God.

It was, of course, they were seduced by the serpent, by the devil, but they accepted this fault and then they repented, thanks be to God, and God gave them the sign of the redemption.

And that we will do this by certain additions, to our brain — maybe some [micro] chips — and to our bodies — maybe some special technology — and the question of the soul really doesn’t emerge in this view, because the soul is regarded as a myth.

And you said in your very interesting book interview, Christus Vincit, “Pure technology is spiritually cold, and therefore people are not happy. They’re empty, they’re continuously seeking pleasures to escape the inner void. To avoid the ugliness, the insanity, people are running after new pleasures, new technologies, and they become, in their souls, cold, egoistic, and cruel.”

What spiritual alternative do you see to this soul-less, technological culture? And do you think it’s important?

You mention these temptations, attempts to transhumanism, and this is really an expression of the greatest pride and the greatest sin against God, [for man] to put himself, to place himself in the place of God and to create something new as a human being.

But they will not succeed, never, because God will not allow this.

God is the only Lord and Creator of the human being.

They can try to do some technical additions, or…

They will not succeed to change the nature of man.

This is God-given and God created this.

They will try to do.

Because this is an area which God reserved for himself completely.

And, therefore, they can only create something [by] a technology and something cold, and this will not make happy a real human being, because there is the soul.

And the soul exists and the soul is created immediately by God in the moment of the conception of the new human life.

And the soul is immortal.

And so, they cannot kill the soul.

As Jesus Christ said in the Gospel “Do not fear those who can kill the body, but who, as God, who can condemn you for eternity in the soul.”

And so, the soul will always remain immortal and a human being.

Well, these attempts to make this transhumanism agenda will not succeed.

Maybe they will succeed, a relatively short time. And then it will collapse, because human nature will revolt, itself. When you try to violate the nature, nature will live out itself against you.

And this will happen because the soul is created by God.

And this, in some way, gives us also hope that, after these horrible attempts of transhumanism and what we are now witnessing of this culture of cold technology and egoism, God will again give humanity the sense of longing for true human values, for, to have a heart, to have a soul, to have relationships marked by the heart, by the soul, not by the cold intellect of technology.