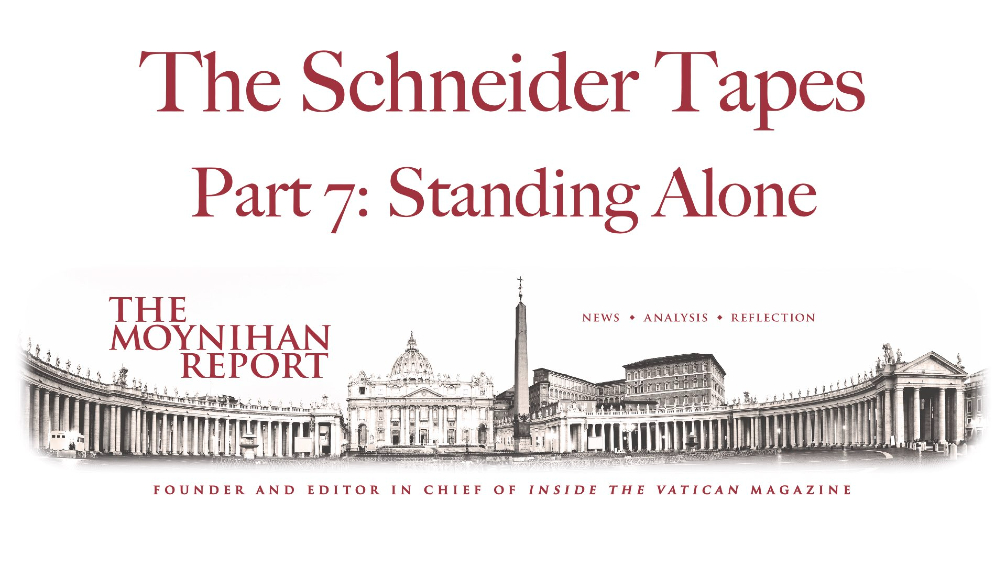 We have posted the 7th of 10 tapes from my late October interview with Bishop Athanasius Schneider, 60, of Astana, Kazakhstan, and it is now available on Rumble (link) and YouTube (link).

In this tape, Schneider argues that greater doctrinal clarity on the part of Pope Francis would be an act of charity toward both the faithful, and also toward those who are not yet part of the Church.

Click the video below for the 7th part of the interview in which Bishop Schneider argues that his call for greater clarity from Pope Francis is an act of charity.

And a very blessed and happy Thanksgiving to all.—RM

Here is the transcript of this tape. We provide this transcript even though the interview is already in English for three reasons: 1) so you have the complete transcript also in written form to email to others, etc.; 2) so that the transcript in typed form is available to be translated into other languages by those who wish to share the text with people in other countries; 3) so that any expressions which seem unclear in the spoken video are clarified in the transcript. —RM

Bishop Schneider argues that his call for greater clarity from Pope Francis is an act of charity.

Robert Moynihan: Well, for the past few years, there have been many bishops, and many lay people who have said Pope Francis is not being clear enough, that he has allowed a certain confusion, that he says one thing and then he says another thing, but he allows, somehow, this to percolate, without clarifying.

Is this a general concern you have, about how he has conducted himself?

Bishop Athanasius Schneider: Of course. This is evident.

Continuously, unfortunately, Pope Francis is doing affirmations, orally or in written form, in his texts.

There are really many things which are not clear, and which people cannot understand and in some way undermine the clarity of the permanent, unchanging divine truth.

And the Apostles always preached in a clear manner. And St. Paul said, “I did not speak to you in an unclear manner.”

And he compared this, “We did not preach the Gospel as someone who does not know where to run.”

Or, “We did not preach the Gospel and fight with someone who does not know how to fight.”

This is a similar expression in one of the letters of St. Paul.

And all Popes, all the Fathers of the Church, always said, “This is the task of the Magisterium, to propose, to expound, to explain in a most clear form the Word of God. That there would not be left any doubts or ambiguity for the faithful.”

So, the Pope and the bishops are shepherds to give good pasture and nourishment for the sheep and to guide them to the waters that are clear, not to the poisoned waters or to waters which are not clear.

This is the shepherd and he seeks very good grass, not ambiguous grass, for the sheep.

And so, the teaching has to be clear.

It is a medicine.

From the clear teaching depends, also, the eternal salvation, and can mislead people.

And so, this is very important for the Pope and for the bishops.

This is their first task, to teach, but to teach clearly, and this is the greatest act of charity, to transmit the eternal truth, which is so beautiful, which gives life, which gives eternal life to the people.

Moynihan: Well, you have spoken about the need for clarity in teaching, and you’ve called this an act of charity for the people who are hungry, for clarity in a society that is relativistic, and where there is a great deal of political correctness, and where people think the teaching of the Catholic Church is changing, or can change.

But why do so few bishops seem to join with you in expressing these concerns about relativism, or the marginalization of Christ — therefore they accept this type of ecumenism without real clear guidelines — or also even about the suppression of the old Latin Mass.

Why are you seemingly alone, or almost alone, among the thousands of Catholic bishops in pointing out the necessity for more clarity as an act of charity?

Bishop Schneider: Yes, this is a difficult question, but of course there are bishops who also think the same and wish (for) clarity.

Moynihan: Can you give examples?

Moynihan: That was Cardinal (Joachim) Meisner [died in 2017 at the age of 83, born in Breslau, Prussia, German Reich on December 25, 1933, became archbishop of Cologne, Germany], who has died…

Bishop Schneider: And Cardinal Caffarra [1938-2017, died at the age of 79, of Bologna, Italy] died, and now Cardinal Burke [73, of Richland Center, Wisconsin, USA] and Cardinal Brandmüller [92, of Germany, now living in retirement in Vatican City] publicly, then, Cardinal Sarah [76, of Guinea, West Africa, now living in Rome] several times expressed himself clearly and…

Well, but there are others who also wish the same, but for several reasons they do not speak out publicly.

Every bishop has to give (an) account in the divine tribunal what he did with his episcopate.

And so, I cannot judge my brothers.

Unfortunately, there are few.

In difficult times, there were not so much in the majority.

It is a sign of the history that always in times of crisis, they were a minority.

But, (at) the same time, what is giving me hope and joy also that there are ever more increasing number of simple faithful, of really simple faithful of all ages, fathers of the family, mothers of family, young people, students, young priests, who speak clearly and explain the faith of all times in a clear manner and teaching them to their children and propagating the faith.

And also, in the internet sphere, there are many occasions and publications, from lay people and this gives me joy and hope that God is using the simple ones in the Church in difficult times to maintain and transmit the purity and the clarity of the faith.

(1) to keep Inside the Vatican Magazine (which we have published since its founding in 1993, 28 years ago) independent and comprehensive… a unique lens into the Church and the World. Now available to you digitally as well as in print!