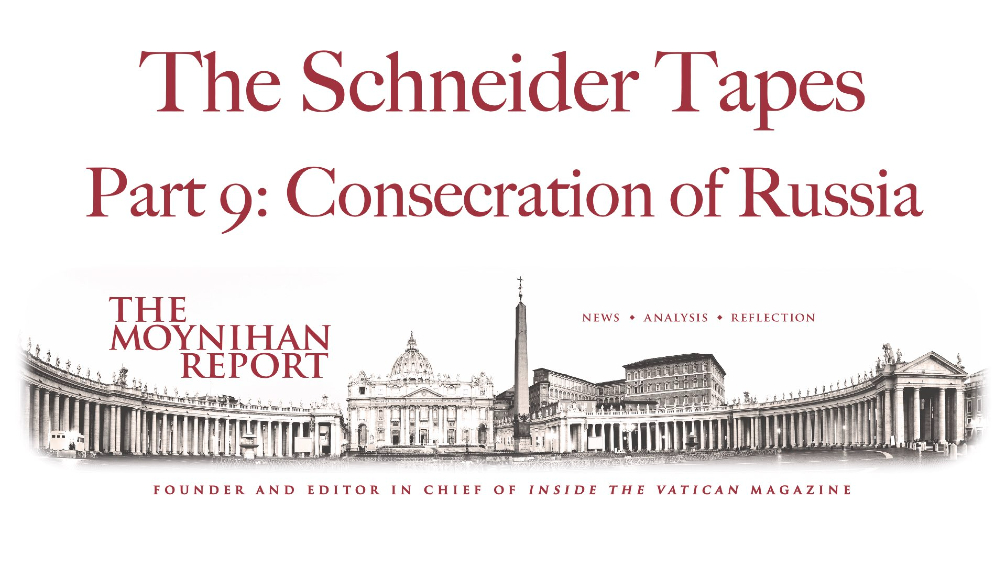 We have posted the 9th of 10 tapes from my late October interview with Bishop Athanasius Schneider, 60, of Astana, Kazakhstan, and it is now available on Rumble (link) and YouTube (link).

In this tape, Schneider speaks of the prophecy of Fatima.

Click the video below for the 9th part of the interview.

In which Bishop Schneider speaks of the prophecy of Fatima

First is the consecration, and second is Russia.

People believe that there was an attempt to consecrate Russia many times, even by Pius XII, then again by, particularly, the great moment in 1984 by John Paul II, but then even an affidamento again in the year 2000 — I was present that day — the “entrustment”, not the consecration.

But then people say none of these were precisely naming Russia. So there’s a great debate in Catholic circles: did John Paul carry out the consecration of Russia to the Immaculate Heart when he said, “I consecrate the whole world,” or still has the consecration not been made, and you think it should be made?

Bishop Athanasius Schneider: Well, we have to simply read the text of his consecration, from ‘84, and there he did not — he does not mention Russia explicitly.

And so, at least we can say he did the consecration in an imperfect form, evidently imperfect.

It was not perfect.

It would be perfect when he would name Russia.

And so, Cardinal Cordes, four years ago, he was in Kazakhstan as a papal legate for the Marian Congress in the Cathedral of Our Lady of Fatima in Karaganda.

And I was present.

And during the homily, the cardinal stated the following which I now quote.

He told that sometime after the consecration of ‘84, he was invited by John Paul II to go to his private dinner in the papal apartment.

And during this dinner, Cardinal Cordes asked the Holy Father, “Holy Father, why did you not mention Russia explicitly in the form of the consecration?”

And the Pope answered him, “This was my intention. But those responsible for diplomacy in the Vatican said not to do this because of some dangerous tensions with the powers in the Soviet Union because of political reasons.”

So, this answered the Pope.

Even so, Sister Lucia reportedly said that heaven accepted this.

Of course, it was a beautiful prayer.

Why should heaven not accept a beautiful prayer?

But, it does not mean…

Moynihan: Do you think Sister Lucy can be regarded as a valid witness of such questions?

She was quite old already at that time.

Bishop Schneider: Yes, but I repeat.

Even if she said (so), it does not mean that Sister Lucia meant or was thinking this was the perfect form.

And I think that an explicit mention of Russia should still be done and then heaven will accept this with more joy.

Moynihan: Well, I have two questions.

One, there is an old belief that — right now it’s slipping my mind — that the Pope will consecrate Russia, but “He will do it late.”

He will delay, he will do it late, he will be old.

It will be almost beyond hope.

Finally, he will do it.

Could Pope Francis do it?

Could Pope Emeritus Benedict do it, in this more perfect way that you are referring to?

And would you encourage one or both of them to do it?

Bishop Schneider: Well, Pope Benedict cannot do it, he is not more [no longer] Pope.

They have to be very clear.

Who can do it is the current Pope Francis, the only current pope, or one of his successors.

We do not know.

It decides, God’s providence. I wish very much of course.

And we pray for them.

And I believe that a time will come when God will inspire, illuminate the successor of Peter to do this.

Moynihan: Ok, then the second concern I would have, not about who would make the consecration, but who would receive it, in a sense, obviously God, the Virgin Mary, but the Russians.

The Russians are the object of this.

You live in Kazakhstan.

That was a part of the Soviet Union; now it’s a separate country.

It was a province, as it were, a republic of the Soviet Union.

You have Russian friends.

Can you help us understand better, this mind and soul?

Is it possible that Russia, which was atheist for 70 years, can experience a conversion, a religious revival?

Is it happening now?

And can they receive, with gratitude, a gesture from the Pope and the Catholic bishops that would consecrate them?

Or would that somehow be politically, diplomatically or culturally unacceptable to them?

Bishop Schneider: I think that today the political situation is different from the Communist time.

So, today I think that even the government of Russia, in my opinion, would consider such a gesture as positive because in some way Russia is valorized [given value] among all, they have value.

When you mention Russia explicitly, only Russia, for example, it is obvious for a politician that it is in some way profitable for the reputation of his country, simply, pragmatical thought.

And therefore I cannot imagine that the Russian government would be against the contrary, I think.

Then the Orthodox Church I think should also be happy because the Russian Orthodox Church is one of the most Marian Christian churches in the world, because they have every day a special title of an icon, which they venerate, of Our Lady.

And so, a profoundly Marian church, the Russian Orthodox Church (is).

And, therefore, when he will entrust or consecrate Russia, and the Russian church, to the care of Our Lady, of the Mother of God, of her Immaculate Heart, I think they should be happy because this is a prayer, even when we are not yet canonically united, we can say to one another, “Please pray for me.”

I have a lot of Orthodox friends, and they say, “Pray for me as I pray for you.”

This we can do.

And when the Pope, the first bishop in the world in apostolic succession, prays — this is a prayer, the consecration is a prayer — prays, officially solemnly for Russia to Our Lady, it should be, it is intrinsically a positive act and even so, should be considered without any prejudices, an act of charity, fraternal charity towards their church.

So, they should consider this in this way.

And I hope it could be explained to them before the consecration should take place in the future these aspects to the government and to the Patriarchate, and even why not to invite representatives of the Russian Orthodox Church to be present to this act of the solemn consecration of Russia to the Immaculate Heart of Mary.

Moynihan: Well, then, even these words you have spoken could in some way prepare, perhaps, for this better understanding of the meaning of the gesture.

There might be one impediment: the Greek Catholic Churches.

Could they be opposed to a consecration of Russia?

Bishop Schneider: No. They would never be opposed.

I know this for sure.

Why would they be opposed?

This is the request of Our Lady of Fatima.

Special note: Tomorrow, Tuesday, November 30, is a day designated in the United States and increasingly worldwide, as “Giving Tuesday,” a day when people may contributions to the work of all sorts of non-profit initiatives (link). We will mention this again on Monday, but if you want to be sure not to overlook this opportunity to support our work, these letters, and our writing in general, you could, if you would like, make a modest donation now, go to this link here, or go here), and we will count all donations from today on as “Giving Tuesday” 2021 donations, and send you back a note of heartfelt thanks. All best wishes to all of you as we move into Advent and the Christmas season anno Domini (“in the Year of the Lord”) 2021. —RM

(1) to keep Inside the Vatican Magazine (which we have published since its founding in 1993, 28 years ago) independent and comprehensive… a unique lens into the Church and the World. Now available to you digitally as well as in print!