Feast of St. Therese of Lisieux, the Saint of the “Little Way”

“I’m afraid I’ve feared death, but I won’t fear it after it takes place: I’m sure of this! And I’m not sorry for having lived; oh! No. It’s only when I ask myself: What is this mysterious separation of the soul from the body? It’s my first experience of this, but I abandon myself to God.” — St. Therese of Lisieux

“When the disciples of the Lord learned from the angel the glorious news of the resurrection and cast off the ancestral condemnation, they proudly told the apostle: “Death has been plundered! Christ our God is risen, granting to the world great mercy.” —Resurrectional Troparia, Fourth Tone, Liturgy of St. John Chrysostom (the liturgy used in the Orthodox Churches and in the Eastern-rite Catholic Churches, composed by St. John Chrysostom, Archbishop of Constantinople, in about the year 400 A.D., drawing on much earlier traditions, dating back to the very beginning)

“I have always found that there is the same difference between the saints and me as there is between a mountain whose summit is lost in the clouds and a humble grain of sand trodden underfoot by passersby. Instead of being discouraged, I told myself: God would not make me wish for something impossible and so, in spite of my littleness, I can aim at being a saint. It is impossible for me to grow bigger, so I put up with myself as I am, with all my countless faults. But I will look for some means of going to heaven by a little way which is very short and very straight, a little way that is quite new…” — St. Therese of Lisieux

“No one who is bound to carnal desires or pleasures is worthy to approach You or to draw near to You, or to minister to You, O King of Glory. For to serve you is great and awesome, even to the heavenly powers… I implore You, therefore, Who alone are good and ready to listen: look upon me, Your sinful and useless servant; cleanse my heart and soul of the evil that lies on my conscience. By the power of Your Holy Spirit enable me… to stand…” —Prayer before the consecration, Liturgy of St. John Chrysostom

“Yes, I’m like a tired and harassed traveler, who reaches the end of his journey and falls over. Yes, but I’ll be falling into God’s arms!” — St. Therese of Lisieux

I stopped in this evening in Santa Maria in Trastevere.

A liturgy was just beginning.

It was in Italian — but it was not the Latin rite. 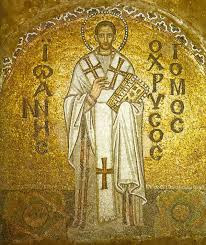 Rather, it was the liturgy of St. John Chrysostom (he lived from A.D. 349 to September 14, 407, serving during the last years of his life as Archbishop of Constantinople; his name means “golden-mouthed,” his nickname because he spoke with such eloquence).

It is the liturgy used in the eastern-rite Catholic Churches and in the Orthodox Churches, but it was being used tonight in a Latin-rite church.

Here is an image of the little missal cover:

A choir of 20 was in the first rows on the left. 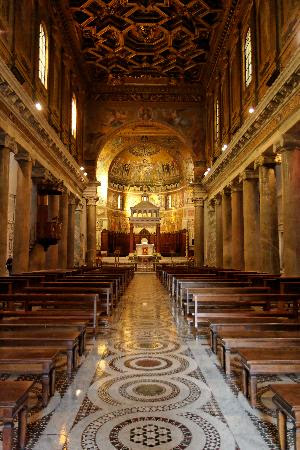 About 100 people were in attendance.

In front of me, astonishing mosaics cover the apse, especially the prophecy of Isaiah, “A virgin will conceive and bear a son.”

Below me, the gorgeous, Cosmatesque marble floor, with curving lines of multi-colored marble in swirling circles.

Above me, the inscription explaining that this church is built on the place where a fountain of oil sprang out of the ground in about 16 B.C., at about the time when the Virgin Mary was born. So the fountain of oil was connected with the early Christians with Mary, and when this church was built, they named it St. Mary in Trastevere. Tradition holds that some members of the early Christian community in Rome lived near this place, so perhaps Sts. Peter, and others, may have walked on this same ground…

My thoughts moved to the question of mortality, as my father, now 91, is growing more frail, and as, from time to time, and increasingly, friends and relatives — and readers — are falling sick, and passing away.

And I thought of St. Therese of Lisieux, and of her “little way,” since today was her feast day…

And the liturgy, sung beautifully by the choir, became interwoven with my thoughts about our mortal human nature — of my nature, of the nature of each of us…

And throughout, the liturgy was being sung…

And it came to me that the liturgy was sublime, that it lifted me deeper into, and far beyond, my own thoughts…

And once again came the words: “Let us who mystically represent the cherubim, and sing the Thrice-holy hymn to the life-giving Trinity, now lay aside all cares of life.”

who mystically represent the cherubim

and sing the Thrice-holy hymn

to the life-giving Trinity,

now lay aside all cares of life.

And it became clear to me that the entire liturgy is a pilgrimage itself, into a place on the edge of space and time, from whence we can gaze into another place, beyond space and time, a holy place, where death no longer ends all of our striving, and where holiness enfolds all corruption in incorruptibility.

And it seemed to me that this explained the great debate in the Church today, between the Pope, who wishes as many as possible to come along on this pilgrimage, for which none of us is truly worthy, and those who wish to remind all of us, and the Pope as well, that the majesty of Christ is so great that all of us must do what we can to prepare ourselves for such a pilgrimage, setting aside sin, desire, pleasure, to make ourselves as much as possible fit to draw close to the Lord of all.

In Santa Maria in Trastevere this evening, these thoughts came to me…

And then, preparing this letter, I reflected upon St. Therese and her “little way.”

Father John Russell, a Carmelit at Seton Hall, has this to say (link):

“St. Therese… took her assignments in the convent of Lisieux as ways of manifesting her love for God and for others.

“She worked as a sacristan by taking care of the altar and the chapel; she served in the refectory and in the laundry room; she wrote plays for the entertainment of the community.

“Above all, she tried to show a love for all the nuns in the community. She played no favorites; she gave of herself even to the difficult members.

“Her life sounds so routine and ordinary, but it was steeped in a loving commitment that knew no breakdown.

“It is called a little way precisely by being simple, direct, yet calling for amazing fortitude and commitment.

“In living out her life of faith she sensed that everything that she was able to accomplish came from a generous love of God in her life.

“She was convinced that at the end of her life she would go to God with empty hands. Why? Because all was accomplished in union with God…

“Her ‘little way’ seems to put holiness of life within the reach of ordinary people.

“Live out your days with confidence in God’s love for you.

“Recognize that each day is a gift in which your life can make a difference by the way you choose to live it.

“Put hope in a future in which God will be all and love will consume your spirit.

“Choose life, not the darkness of pettiness and greed.

“St. Therese knew the difference love makes by allowing love to be the statement she made each day of her life.” 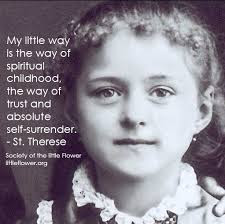