As I write, at noon Rome time, Alfie Evans has one hour to live.

His breathing tube will be removed at 1 p.m. Rome time.

But this letter is not just about Alfie’s life — supremely valuable as the life of any individual human being is.

It is about the life of our whole civilization, which stands before the moment of its condemnation.

It stands before the moment of its condemnation for openly, legally, with various and sundry “reasonable” arguments, embracing “the culture of death,” the culture of the “useful,” of the “utilitarian,” the culture which rejects the principle rightly enunciated the other day by Pope Francis: that only Almighty God is the “author of life” and may take life.

The culture that rejects the very notion of such an Almighty God.

Alfie’s death is about the rejection of the fundamental belief of our Western Christian civilization, that some things are sacred, inviolable, always to be guarded, protected and respected.

In Liverpool, England, a ventilator through which 23-month-old Alfie, stricken with an unknown illness a year and a half ago, breathes… is scheduled to removed at 1 p.m. Rome time.

By the decision of his doctors, and and the support of the British Supreme Court… and against the wishes and will of his parents, Tom Evans, 21, and Kate James, 20, who had asked permission to remove the child from the Liverpool hospital and to transport him to the Bambino Gesu pediatric hospital in Rome, where the hospital administration was prepared to continue to research a remedy for Alfie’s unknown illness.

This is the legal decision which makes this case so tragic.

Some will argue that Alfie’s brain has been judged incurably harmed, that he will never recover.

However, some doctors in various coutries say they are not persuaded that this is the case, and have proposed that other therapies might be tried which might be effective in helping Alfie.

This is the point: no alternative is being allowed, though some (even if they be few) believe there might be an alternative.

Some will say — and the Catholic bishops of Britain have said, in a statement (see article below) — that there can be no question that the hospital and its doctors gave the best possible care to Alfie.

But there can be such a question, because doctors are human, and humans are imperfect, and some of the treatments that Alfie received — some of the any vaccinatios and drugs that he received — may possibly have contributed to his condition.

And it is the parents who should have the primary right to make medical decisions for their child — not the Liverpool hospital, and not the British high court.

This case becomes one more precedent in the long process diminishing the primary rights of the mother and father to care for their child.

Here is an image of the final page of the legal decision of Britain’s highest court, with the tree signatures of the judges: 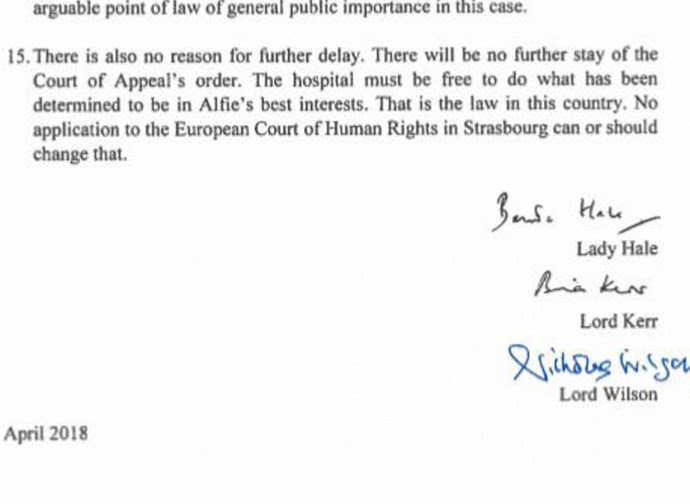 This legal decision states that it is in Alfie’s “best interests” to die, rather than to be cared for while additional research is done which might possibly lead, eventually, to the improvement of his condition.

This is how Alfie will die (link):

“With regard to the process of suspension of ventilation, at 1 p.m., through a small tube a preparation of Midazolam (an anxiolytic) and Fentanyl (an analgesic) will be administered, the amount subsequently to be increased to control the symptoms, if necessary. The Hospital will provide for the aspiration of the mouth and the airways as well as the care of the same mouth.

“Alfie will be carefully placed on Mr. Evans and Ms. James’s laps if they wish, otherwise he will remain in his crib.

“All Alfie’s heartbeat monitoring and breathing will be disconnected.

“The respirator tube will be disconnected from the ventilator and will be removed.

“From that moment on, the medical staff will continue to observe Alfie’s situation and the level of comfort and to wait for her needs and those of her family, with discretion, but ready to provide support and comfort with solicitude.

“Once all external signs of life have ceased, an expert doctor will physically examine Alfie to ascertain his death and record the time of death.

“After the death has been confirmed, the family can wash the body, dress it and spend time with it, before transferring it to a special room where the whole family can have access.

“The doctor who has confirmed Alfie’s death will have to contact the coroner for all the formalities related to the issue of the death certificate.”

And thus little Alfie will pass from this world.

Alfie is a baptized Catholic, and recently received the last rites of the Church.

May his soul rest in peace. May eternal light shine upon him.

And may we on this day of Alfie’s death re-dedicate ourselves to the principle of the sacrality, the sacredness, of human life, from conception to natural death… especially the life of the most innocent.

And let us pray for Alfie, and his parents, and all who have been involved in this case.

For the dawn of the culture for which nothing is sacred, for which everything may be justified, for which man’s will replaces God’s will, is upon us…

Such a cutlure may become very cruel, even it its decisions are presented with smooth and soothing words… 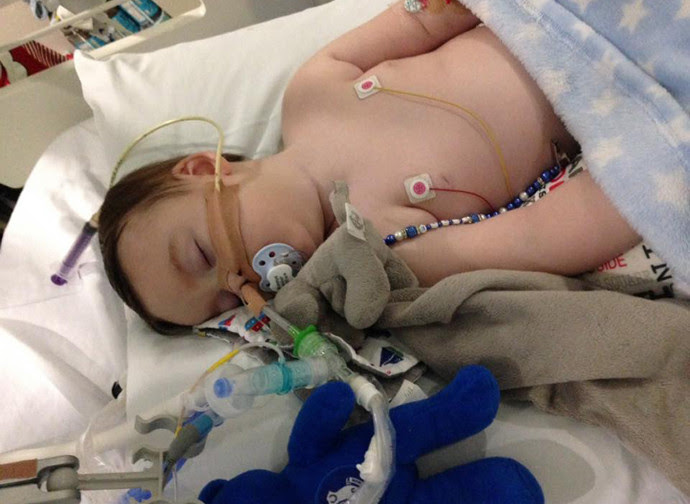 The following article was published this morning by Vaticanist Sandro Magister. It gives a useful summary of the stages of this case, including the role of Pope Francis in revent days.

Before Easter there was Lent. Starting with that dramatic February 20 on which the supreme court in London ruled that little Alfie Evans, 22 months, afflicted with an unknown and incurable neurological disease and a patient at the Alder Hey Children’s Hospital in Liverpool, must be put to death by the removal of his ventilation.