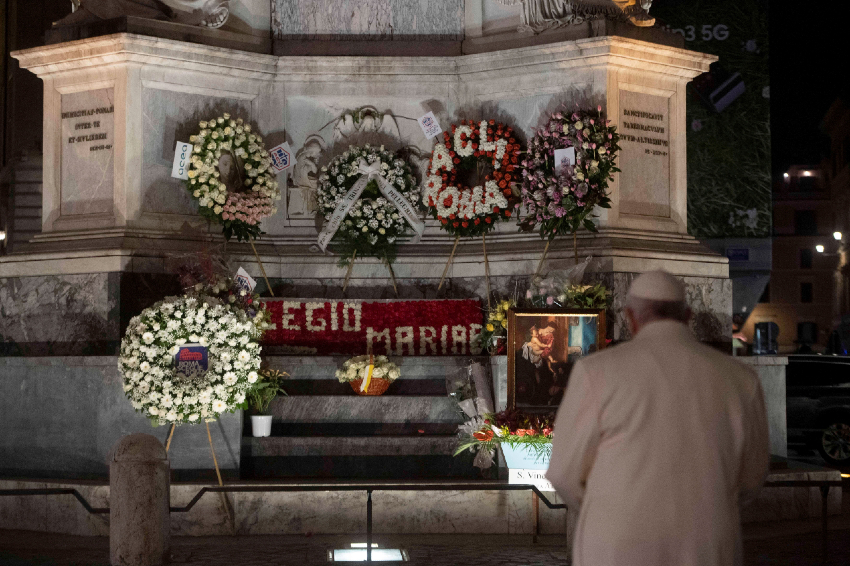 Pope Francis prays at a tall Marian statue overlooking the Spanish Steps in Rome Dec. 8, 2021, the feast of the Immaculate Conception. (CNS photo/Vatican Media via Reuters)

In Rome, for the past 150 years, since the promulgation of the dogma of the Immaculate Conception by Pope Pius IX (Pope 1846 to 1878, the longest papacy in history, link), in 1854, there has been a solemn public ceremony next to a massive column dedicated to the Virgin Mary in Piazza di Spagna in Rome. But last year and this year due to Covid concerns the ceremony was, for the first time, made private. Pope Francis got up before 6:00 a.m. this morning and went as the sun was rising privately to Piazza di Spagna placing some roses at the foot of the column and praying silently in honor of the Virgin.

Below is an article which describes what the Pope did this morning (link) with the full text below. 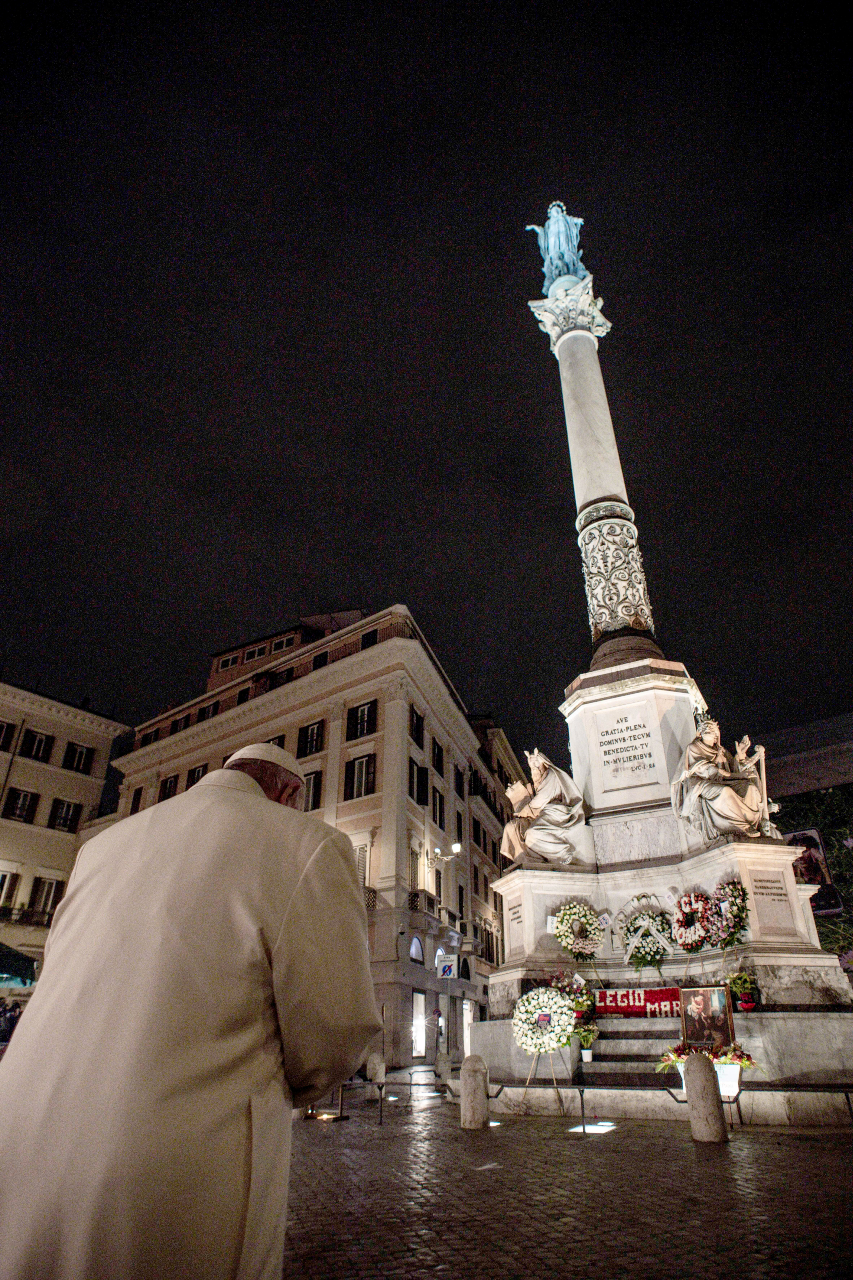 Pope Francis prays at a tall Marian statue overlooking the Spanish Steps in Rome Dec. 8, 2021, the feast of the Immaculate Conception. (CNS photo/Vatican Media via Reuters)

The text was first published this morning by the website of Italian journalist Marco Tosatti called Stilum Curiae (“The Pen of the Curia”), as follows:

Viganó. Act of Veneration of the Immaculate Conception, December 8, 2021. (link)

Dear friends and enemies of Stilum Curiae, we receive and gladly publish this act of veneration of Archbishop Carlo Maria Viganò on the occasion of December 8. Good reading and participation. —MT

These solemn words, with which the Holy Scriptures speak of the divine Wisdom, are attributed by the liturgy to the Most Holy Virgin. It is the Immaculate Conception who speaks:

“From the beginning, and before the world, was I created, and unto the world to come I shall not cease to be, and in the holy dwelling place I have ministered before him. And so was I established in Sion, and in the holy city likewise I rested, and my power was in Jerusalem. And I took root in an honourable people, and in the portion of my God his inheritance, and my abode is in the full assembly of saints.” (Ecclesiastes 24:14-15)

Chosen before the ages, established in the Church, Our Lady intercedes for us in the holy abode, she lives among us, and of us she is Queen. She has chosen us as a glorious people, a legacy of her divine Son, a host of saints. And it is significant that, through a singular symmetry, the hymn of the Dedication of a church Cœlestis urbs Jerusalem [“The heavenly city Jerusalem”] composed by St. Ambrose – whose feast we celebrated yesterday – can be applied to Our Lady: “O sorte nupta prospera, dotata Patris gloria, respersa Sponsi gratia, Regina formosissima, Christo jugata principi, cœli corusca civitas.” “Married by providential destiny, adorned with glory by the Father, crowned with the grace of the Bridegroom, most beautiful Queen, united with Christ the Prince, shining City of Heaven.”

On this blessed day, let us remember the proclamation of the dogma of the Immaculate Conception of the Blessed Virgin Mary, preserved from every stain of original sin to be the living and uncontaminated tabernacle of the Most High. And while the world, corrupt and enslaved by sin, offers as a model a corrupt and vicious femininity, despising virginity, purity, and motherhood, we honor in the Ever-Virgin Mother of God She who rightly is also the Mother of the Church and our Mother.

We are children of the Blessed Virgin Mary and children of the Church, because the Virgin begets us in Christ to the Father, and at the foot of the Cross we have been entrusted to her by Him as children, and she to us as Mother. And the Church also generates us in Christ to the Father through Baptism, to the Church we are entrusted as children at the foot of the altar, and that water and blood that flowed from the side of the Lord flow abundantly in his Sacraments and in the Holy Mass, showing us the love of the divine Bridegroom for the bride, the Charity of Christ its Head towards the Mystical Body.

We therefore honor Our Lady, who has placed in the new Jerusalem – the Holy Church – her abode, and who has chosen to live “in the midst of a glorious people,” as the book of Ecclesiastes states. A people that is glorious and honored not due to its own virtues, but because it has been sanctified by the Grace of God, by belonging to that Holy City to which we are all called. A people who today must regain the pride of their identity, the pride of belonging to Christ, the honor of standing under the holy insignia of the King of kings. A people who over the centuries have been able to build a Christian society that is now despised and banned by those who, rebelling against Christ, do not even tolerate that the blessed name of His Most Holy Mother Mary should even be pronounced.

Gathered in the Spanish Square, in front of the statue of the Immaculate Conception that the public authority erected to honor its Mother and Queen, let us renew our tribute and make it our purpose to rebuild, on the rubble of an apostate world, that “ordo Christianus” (“Christian order”) that alone can guarantee peace to mankind, concord among peoples, prosperity for nations, salvation for souls. This reconstruction, this spiritual and moral rebirth for which each of us longs, will be possible only if we know how to recognize the social kingship of Our Lord and live with coherence the Faith we profess.

This we ask, this we implore with firm and trusting faith in the Mother of God: Salve Regina, Mater misericordiæ… “Hail Queen, Mother of mercy…”

ROME, Dec 8 (Reuters) – Pope Francis made a private pre-dawn visit to a Rome religious landmark on Wednesday for the second year after a public service was again cancelled because of the pandemic and decried the “stone hearts” of those not moved by the suffering of migrants.

Francis, wearing a full-length white overcoat against the cold, arrived near Rome’s Spanish steps before 6:15 a.m. (0515 GMT), and stayed for 10 minutes. He prayed and placed a basket of white roses at the base of a 12-metre column bearing a statue of the Madonna.

Dec. 8, the Feast of the Immaculate Conception, is a national holiday in Italy and some other countries of Catholic tradition.

For the second consecutive year, Francis was forced to cancel an open air public service at the base of column that would have attracted thousands of people, increasing the possibility of contagion.

A Vatican statement said he had prayed for healing the victims of COVID-19, war and climate change, and asked the Madonna to “melt the stone hearts of those who put up walls to keep other people’s pain away from them”.

Later, addressing people in St. Peter’s Square for his noon address on the holiday, Francis spoke of his trip to Cyprus and Greece, which ended on Monday and whose central theme was migration.

“Before history and before the faces of those who emigrate, we cant keep silent, we can’t look the other way,” he said.

“Please, let us look into the eyes of the people we meet who have been cast aside, let us allow ourselves to be moved by the faces of the little ones, children of desperate immigrants,” said the pope, who visited the Greek refugee island of Lesbos.

“Let their suffering be carved into us to shake us out of our indifference. Let us look at their faces to wake us from the sleep of routine,” he said.

During the trip, he condemned the exploitation of migrants for political purposes, branded the global indifference to their plight the “shipwreck of civilisation” and lamented that Europe was in “the era of walls and barbed wire”.