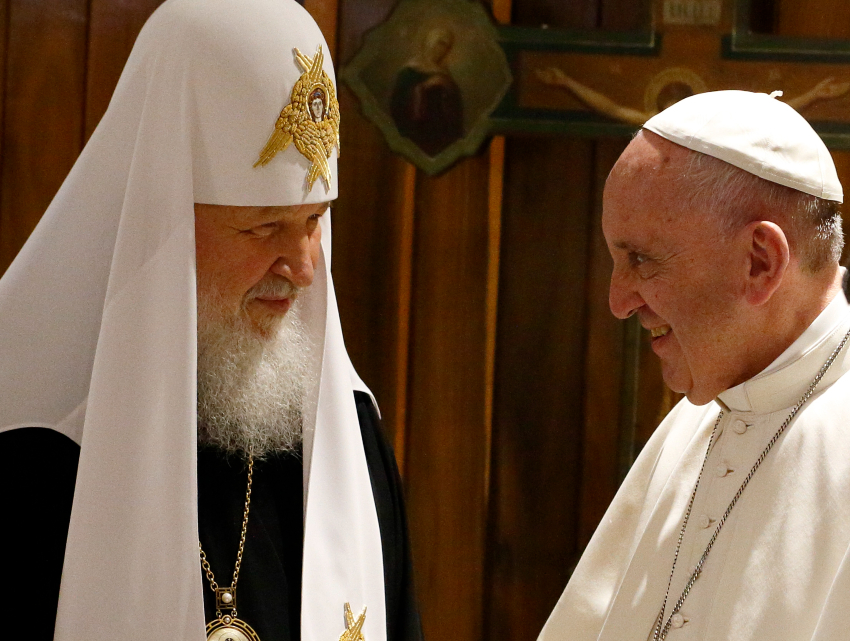 Could another Pope-Patriarch meeting be imminent?

Our good friend Peter Anderson, a retired lawyer who lives in Seattle, Washington, and from there follows events concerning Catholic and Orthodox relations around the world, has just sent a fascinating email report to me in which he poses the significant question: Could Pope Francis travel to Russia in 2022? Below is his complete report.

Recent comments by the Pope suggests discussions are underway for another meeting between Pope Francis and Patriarch Kirill, head of the Russian Orthodox Church.

Pope Francis departed from Athens this morning (Dec. 6) and is now back in Rome. As is his custom, he stopped first on his return to Rome at the Basilica of Santa Maria Maggiore to pray before the ancient icon Salus Populi Romani. (link)

This Byzantine icon of the Theotokos and the Christ Child arrived in Rome from Crete during the pontificate of Pope Gregory the Great in the year 590 A.D. It represents a bridge between the East and West when the Church was united.

The Pope’s visit to Athens included two events of interest to Orthodox. The first was his visit to Archbishop Hieronymos, primate of the Orthodox Church of Greece, in the Throne Room of the building of the Archbishopric. A video of the entire meeting on December 4 is found at (link). Also present at this meeting were a number of Greek Orthodox bishops who have had significant contacts with the Vatican in the past, such as Metropolitan Chrysostomos of Messinia (a member of the Joint International Commission for Theological Dialogue between the Orthodox and Catholic Churches).

The full text of the address by Archbishop Hieronymos is found at (link) (in Greek). The Archbishop’s address included remarks relating to the pandemic, immigration, and the environment. With respect to Pope Francis, he stated: “I absolutely trust your judgment, your spiritual greatness and your great ecclesiastical experience. Finally, we welcome you, recognizing in your person a capable and humble worker of the gospel message for our unity in the common faith in Christ. The common course of the Roman Catholic Church with the Orthodox Church during the first millennium of Christianity has much to teach us.” However, the Archbishop did criticize the position of Catholics in the Greek National Uprising against the Ottoman Empire and urged the recognition by the Pope of the role of the martyrs and heroes who fought to free Greece.

The English official translation of the entire address by Pope Francis is found at (link). This appeared to be a prepared address and not in response to any specific remarks by the Archbishop. The Pope’s address included the following:

Tragically, in later times [after the early Church fathers] we grew apart. Worldly concerns poisoned us, weeds of suspicion increased our distance and we ceased to nurture communion. Saint Basil the Great says that true disciples of Christ are “modeled only on what they see in him” (Moralia, 80, 1). Shamefully – I acknowledge this for the Catholic Church – actions and decisions that had little or nothing to do with Jesus and the Gospel, but were instead marked by a thirst for advantage and power, gravely weakened our communion. In this way, we let fruitfulness be compromised by division. History makes its weight felt, and here, today, I feel the need to ask anew for the forgiveness of God and of our brothers and sisters for the mistakes committed by many Catholics. Yet we are comforted by the certainty that our roots are apostolic and that, notwithstanding the twists and turns of time, what God planted continues to grow and bear fruit in the same Spirit. It is a grace to recognize one another’s good fruits and to join in thanking the Lord for this.

On December 5, after the Pope returned to Athens from Lesvos, the Archbishop made a reciprocal visit to the nunciature in Athens. This meeting is described at (link) (includes photos).

Yes, thank you. I apologized, I apologized in front of Hieronymos, my brother Hieronymos. I apologized for all the divisions that there are among Christians, but above all those that we provoked: the Catholics. I also wanted to apologize, because during the war for independence — Hieronymos pointed this out to me — some Catholics sided with European governments to prevent Greek independence. On the other hand, on the islands, the Catholics of the islands supported independence, they even went to war, some gave their lives for their country. But the center, let’s say, at that moment was siding with Europe. I don’t know which government was there […] but the accusation was that. And I also ask pardon for the scandal of division, at least for that for which we are to blame. The spirit of self-sufficiency — we keep our mouths shut when we hear that we must apologize — it always makes me think that God never tires of forgiving, never, never. It is we who tire of asking forgiveness. And when we do not ask God for forgiveness, we will hardly ask our brothers and sisters. It is more difficult to ask forgiveness from a brother than from God, because we know that He says: “Yes, go forth, you are forgiven.” Instead, with brothers, there is shame and humiliation. But in today’s world, we need the attitude of humiliation and apologizing. So many things are happening in the world, so many lives lost, so many wars, so many… How come we don’t apologize?

Returning to this, I wanted to apologize for the divisions, at least for those that we caused. For the others, it is a responsibility to ask forgiveness, but I apologize for ours, and also for that episode in the war where some Catholics sided with the European government, and those on the islands went to war to defend. I don’t know if that’s enough. And one last apology — this one came from my heart — an apology for the scandal of the migrant drama, for the scandal of so many lives drowned at sea, and so on.

With respect to the synodal aspect of the Church, the Pope stated:

Yes, we are one flock, it is true. And this division – clergy and laity – is a functional division, yes, of qualification, but there is a unity, a single flock. And the dynamic between the differences within the Church is synodality: that is, listening to one another, and going together. Syn odos : lead the way together. This is the meaning of synodality. Your Orthodox Churches, even the Eastern Catholic Churches, have preserved this. Instead the Latin Church had forgotten the Synod, and it was St. Paul VI who re-established the synodal journey 54, 56 years ago. And we are making a journey to have the habit of synodality, of walking together.

With respect to a question from the Russian news agency TASS, the Pope stated:

The meeting with Patriarch Kirill is in the near future. I believe that next week Hilarion will come to me to arrange a possible meeting, because the Patriarch has to travel – I don’t know where he is going… he goes to Finland, but I’m not sure. I am always willing, I am also willing to go to Moscow: there are no protocols to talk to a brother. Brother is brother, first of all protocols. And I with the Orthodox brother – who is called Kirill, who is called Chrysostomos, who is called Hieronymos, is a brother – we are brothers and we say things to each other. We don’t dance the minuet, no, we say things to our faces. But as brothers. It is beautiful to see brothers arguing: it is beautiful, because they belong to the same Mother, the Mother Church, but they are a little divided, some because of the inheritance, the other for the history that has divided them… But we must go together and try to work and walk in unity and for unity. I am grateful to Hieronymos, to Chrysostomos, to all the Patriarchs who have this desire to walk together. Unity … The great Orthodox theologian Zizioulas is studying eschatology, and jokingly once said that we will find unity in eschaton, there will be unity. But it is a way of saying. This does not mean that we have to sit still waiting for the theologians to come to an agreement, no. This is a phrase, a way of saying, it is what they say Athenagoras said to Paul VI: “Let’s put all the theologians on one island and we go together somewhere else.” It’s a joke. But the theologians, who continue to study, because this is good for us and leads us to understand well and to find unity. But in the meantime, we move forward together. “But how?” Yes, praying together, doing charity together. For example, I am thinking of Sweden, which has Lutheran-Catholic Caritas together. Working together, right? Working together and praying together: we can do this. The rest, let the theologians do it, that we do not understand how to do it. But do this: unity begins today, along this path.

The last statement by Pope Francis must have caught the Moscow Patriarchate by surprise. Metropolitan Hilarion immediately released a statement in English. (link)

It states as follows:

In the 20’s of December, my meeting is planned with Pope Francis of Rome. I intend to congratulate him on his 85th birthday on behalf of His Holiness Patriarch Kirill and to discuss with him a wide range of issues concerning the bilateral relations between our two Churches. Among these matters is a possible meeting of Pope Francis with Patriarch Kirill. Neither the venue, nor the date of the meeting has been determined so far. As for the visit of Patriarch Kirill to Finland, I can report the following. As far back as several years ago, the Patriarch received an invitation from the head of the Evangelical-Lutheran Church of Finland, the Orthodox Archbishop of Finland and the Catholic Bishop of Helsinki. However, ‘a lot water has run’ since, the inter-Orthodox situation has changed and a pandemic has begun. Now the preparation for this visit has been stopped. As for the Pope’s visit to Moscow, I can say that this matter has not been discussed on the bilateral level. I hope that the meeting planned for the 20s of December will offer an opportunity to discuss all the issues of mutual concern.

My guess is that a meeting between Francis and Kirill is being planned to be held in the near future although the exact date and place has not yet been determined. The Moscow Patriarchate will not agree to a Russian venue, in my opinion.

On a completely different topic, more details on the Orthodox tensions in Western Europe, the subject of my last report, has been provided at (link)