Letter #17: Benedict speaks on the “Vatileaks”

Letter #17: Benedict speaks on the “Vatileaks”

“Events in recent days regarding the Curia and my collaborators have brought sadness to my heart.” —Pope Benedict XVI, during his Wednesday General Audience in St. Peter’s Square today 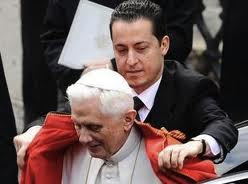 Pope Benedict spoke publicly today for the first time about the “Vatileaks” scandal which in recent weeks has seen published dozens of private documents from his own apartments (and the word circulating here is that more documents are about to appear).

In his brief remarks, the Pope first expressed his sadness, then noted that, despite his sadness, his faith in Christ, and in Christ’s care for His Church, has not been shaken, but remains firm.

“Events in recent days regarding the Curia and my collaborators have brought sadness to my heart, though (I have) the firm conviction, that despite human weakness, despite difficulties and trials, the Church is guided by the Holy Spirit, and the Lord will never fail to give His aid in sustaining the Church on her journey,” Benedict said, speaking to crowds in St. Peter’s Square who had gathered for his ordinary Wednesday General Audience.

The Pope then made two observations: (1) that there have been many exaggerations and false reports in the media about this case (some Italian papers have printed stories which refer to the Holy See as a “nest of vipers”); and (2) that he himself still has deep trust in the work of his collaborators and advisors in the Curia.

“Nevertheless, some entirely gratuitous rumors have multiplied, amplified by some media, which went well beyond the facts, offering a picture of the Holy See that does not correspond to reality,” the Pope said. “I would like therefore to reiterate my confidence and my encouragement to my staff and to all those who, day in and day out, faithfully and with a spirit of sacrifice, quietly help me in fulfilling my ministry.”

Here is a link to a video from Rome Reports which shows the Pope’s words today. I recommend clicking on it and watching it: http://www.romereports.com/palio/pope-talks-about-vatileaks-expresses-his-distress-english-6931.html

The key figure thus far in this case is Paolo Gabriele, 46, the Pope’s valet or butler (photo above, helping the Pope to adjust his red cape).

Gabriele appears to have betrayed the Pope’s trust by copying and disseminating secret Vatican documents from the Pope’s own apartments. He is now being held under arrest in a holding room inside Vatican City, and is being questioned. He has told Vatican officials that he is willing to cooperate with them, leading some Italian papers to specualte that, in the end, charges against him may even be dropped, and he may never go to trial.

However, it must be emphasized that there still remain many things about this case that are unknown or unclear.

Did Gabriele begin to copy documents years ago, starting in 2006, at the time he began to work closely with the Pope, or only more recently? We do not know.

Were some documents perhaps gathered by other, unknown people, then handed over to Gabriele, whose “parallel archive” in this scenario became a kind of central collection center?

Did Gabriele, in short, work alone, or not? And if he did not work alone, who were his collaborators, advisors, supporters, accomplices?

And how many documents, precisely, did he steal? At first there were reports in the Italian press that “stacks” and “boxes” of documents were found when Vatican police raided his home, just outside St. Anne’s Gate. Then, Gariele’s attorney issued a statement saying that this was simply not true. So were there “stacks” of documents found, or not? We simply do not know.

Nor do we know if there may be documents already handed over to others which were not among the documents found in Gabriele’s home. There is simply no way of knowing whether or not there are dossiers that have already been placed in the possession of others outside of the Vatican, and not yet published.

These are just some of the unanswered questions in this case. There are many more.

Rome Reports has done a nice summary of the case, providing videos and pictures of each of the main actors, at the following link: http://www.romereports.com/palio/whos-who-in-the-vatileaks-case-english-6942.html

What Provisional Conclusions Can We Draw?

Recognizing that we are in the dark about many aspects of this case, what can we say with some certainty at this point?

First, we can say that there has been an astonishing breach of Vatican privacy and, hence, of Vatican security. This case is comparable to the theft and publication of dozens of documents on very private matters from the desk of a national president. How would we judge the matter if the private papers of a Vladimir Putin, a Barack Obama, an Angela Merkel, or a Shimon Peres (leaders of Russia, the United States, Germany, and Israel, respectively) were taken from their very desks and published? We would feel that there had been a breach of trust at the highest level in each of these countries; that the ordinary safeguards against such activity had broken down; that one or more people in the inner circles of these leaders had taken it upon themselves to make public that which ordinarily is not meant to be public.

Second, we can say that in all the documents published, not one single dcoument published thus far casts a poor light on the Pope himself.

The Pope, up to now, has come out of this unprecented, confusing situation as a man who, at every opportunity, seeks the truth. In this sense, thus far, the Pope himself has not been harmed by the “Vatileaks” affair.

But, and this is the third point, we can say that the Curia has not come out of the scandal as well as the Pope has. The Curia has come across, in the leaked documents — and in the very fact that the documents were collected and then leaked — as a quite human place of powerful, sometimes mean-spirited, cross-currents and interest groups.

The Catholic Church is a fascinating, complex, living, global, ancient institution. There are more than 4,500 Catholic bishops around the world, and some 1 billion people who belong to the Church.

From the time of Constantine, the Church — due to the decline of the civil structures of the Roman Empire — has had to play a public, civic role, as well as a private, sacramental role. This, in part, explains the emergence and growth of the Roman Curia.

But it is the second role which is the Church’s essential mission: to care for souls, to save souls, to foster holy lives, to prepare souls for holy deaths and the passage to a better world, a deeper, more enduring (eternal) reality than this passing one.

We live in a world which diminishes, or even condemns, this sacramental, transcendental role of the Church, because the world wishes to proclaim without opposition that this passing world is the only reality there is, that there is no transcendant order at all, at least none with any reality whatsoever. That eternal blessedness is only a pious dream — that eternal misery, as well, is an illusion.

Any diminishment of the Church’s authority, any blackening of the Church’s reputation, any confusion sown in Church ranks, serves the purposes of those who do not wish their own immorality, or acts of fraud and oppression, to be condemned.

And if there is, either in a chaotic, unpremeditated, or in a coordinated, premeditated, way, a new world order coming into being which wishes to have free reign throughout the planet, and which, to that end, desires a Church passive, subordinate, divided, it serves the purposes of the architects of that order to have the Pope paraded before the world as an impotent old man, unable to care for the affairs of his own household.

The Curia and the Church seems to be in disarray, and so, in a sense, not qualified to offer advice, or direction, or wisdom, to a world sorely in need of all three.

In this sense, the effect of this “Vatileaks” scandal thus far, whether planned or not, may have been to diminish the dignity and authority of the Pope, of his Curia, and of the Church as a whole.

But that may not be the final result of this story.

The odd things about human affairs is that they can sometimes turn out differently than the planners of events intend.

And in this case, there is already emerging something entirely different than what seems likely to have been the original intent.

Instead of isolating the Pope even further, leaving him alone and impotent, the “Vatileaks” affair is winning sympathy and support for the aging Pope.

And therefore, if Benedict continues in the way he has up until now, steadily, patiently, wisely, speaking with authority, with eloquence, with charity but in truth, this strnage case may actually end up giving him an even larger and more attentive audience, so that his words, in our troubled 21st century world, where economic, social, envrionmental, and moral crises are deepen and intensifying, may find their way into hearts, and bear fruit.

Indeed, Benedict’s credibility seems day by day to be strengthened, as he stands, patient and often alone, againt the forces that would sow confusion, and reap the disintegration, of the Church he leads.