“The true freedom of man always derives from a choice between heaven and earth.” —Dato Magratze, Nobel Prize Laureate in Literature from the country of Georgia in the Caucasus. He recently met with Pope Francis.

On November 23 — three weeks ago — the Italian translation of the works of the brilliant Georgian poet Dato Magradze, author of his country’s post-Soviet national anthem, were presented to the Holy See by the Georgian embassy.

What makes this writer’s vision – centered on the freedom of the human being – so important is that it finds its ultimate meaning in “the choice between heaven and earth.”

“Faith and freedom are intrinsically linked,” he says.

The recognition of God is the only force that is able to restrain earthly powers like the state, he adds.

One of Magradze’s famous verses is: “The state no longer seeks the man in the citizen.”

He explains: “What I want to recall by that is that God created the human person, while the state created the citizen, sometimes forgetting its sacred dimension. To compensate for this lack, the main mission of poetry is to save the human in the citizen.”

In this time of lockdowns, vaccination mandates, forced acceptance of transsexualism and the reach toward transhumanism, all foisted upon us in the midst of governmental dishonesty around the globe, Magradze’s words take on a prophetic significance.

Note to readers: A special rosary will be held at St. John the Baptist Church in Front Royal, Virginia, in less than two days — at 1 p.m. on Thursday, December 16. The prayer is open to all, including non-Catholics. This prayer, organized by a new group of two dozen Catholic writers and editors, will mark the beginning of a campaign of prayer to the Virgin Mary in the present circumstances of our world, a time in which precious human dignity and the sacred dimension of the human person (of which this Georgian author speaks so eloquently) seem to be threatened by many challenges. —RM

Note to all readers: We are now continuing our Christmas fund-raising drive. We hope to raise $30,000 between now and December 31 to support these letters, interviews, videos, and analyses during 2022. Please go to this link to make your donation. 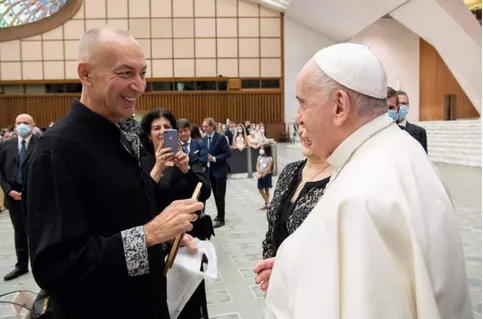 Here is an article from the National Catholic Register (link) on Dato Magratze, the Georgian poet laureate.

Poet and author of Georgia’s national anthem, Dato Magratze, discusses the Christian dimension of his literary work, recently presented to Pope Francis in the Vatican.

As a passionate advocate of human freedom, Dato Magradze, author of the national anthem of Georgia, considers faith to be the greatest emancipating force of a people because it has the unique power to put the state and other earthly powers in their proper place.

It is with that in mind that the Georgian poet composed Tavisupleba (“Freedom”), officially adopted as Georgia’s new hymn in 2004, in the aftermath of the Rose Revolution, which put an end to the painful Soviet era in this Caucasus country.

While answering the Register’s questions on the occasion of the presentation of his works recently translated in Italian — promoted by the Georgian Embassy to the Holy See in Rome — Nov. 23, Magradze highlighted how adversity and the suppression of freedom have the effect of exalting the religious feeling of the people. The vibrant faith of the people of Georgia, a land and people that have suffered severely from communist totalitarianism in the 20th century, is, in his view, a good example of that.

Nominated three times for the Nobel Prize in Literature, Magratze also served as Georgia’s minister of culture of between 1992 and 1995 and as a member of the Parliament of Tbilisi between 1999 and 2001. An important political and intellectual figure of the Post-Soviet era in the country, the poet is convinced that the true freedom of man always derives from a choice between heaven and earth.

You met with Pope Francis in September to present him your poetic works recently translated into Italian. What impression did it leave on you?

This meeting was amazing. We discussed some very intimate things that I will not be able to reveal to your audience, but I have a wonderful memory of it. It was very important for me. When you meet the Pope, you are impressed; he always gives you the impression that you were expecting a meeting with yourself. And he has such a high spirituality that he is a very modest person.

“The state no longer seeks the man in the citizen” is a verse of yours that you often quote and that has become a kind of motto for you. Do you mean that today’s states are dehumanizing? Why?

What I want to recall by that is that God created the human person, while the state created the citizen, sometimes forgetting its sacred dimension. To compensate for this lack, the main mission of poetry is to save the human in the citizen. It is what a poet always tries to do.

What I also intend to denounce is that civilization seeks in man a criminal. Civilization was the one that crucified Jesus. Instead, culture, of which poetry is a part, seeks in the criminal a person, a man, symbolically. And it is in this that the role of the poet is fundamental for any society.

You are the author of Georgia’s national anthem, first adopted after the so-called Rose Revolution of 2003. What was your state of mind when you wrote that text?

As a poet, I never write focusing on the events of the moment. I always try to think about the language of eternity. But we, for so many years, were deprived of freedom [the country lived under the Soviet yoke for 70 years]. When we got this freedom back, emotion led me to write these verses. However, at that moment, even though the emotion sent me into raptures, I was not thinking only about the present. I was imbued with the past, present and future. For these three times, when they cancel each other out, give birth to divine time and timeless truths.

Faith and freedom are at the heart of the hymn you wrote. What relationship do you see between these two ideas? Why do you feel they are so fragile?

Faith and freedom are intrinsically linked. This is how God addressed Adam, from the pen of great medieval poet Giovanni Pico della Mirandola: “We have made you neither of heavenly nor of earthly stuff, neither mortal nor immortal, so that with free choice and dignity, you may fashion yourself into whatever form you choose. To you is granted the power of degrading yourself into the lower forms of life, the beasts, and to you is granted the power, contained in your intellect and judgment, to be reborn into the higher forms, the divine” [Oratio de Hominis Dignitate].

So God did not put us in a specific place in the cosmic hierarchy: You choose whether you are to be of earth or heaven. It’s a very broad topic, but it can all be summed up to the choice between heaven and earth. It is the basis of faith.

There is another trend happening today. Some new ideologies want to ensure that human beings no longer have that fundamental freedom of choice of being able to be good or bad. It makes it so that we no longer have the necessary experience to distinguish good from evil, beauty from ugliness. Our free will is annihilated by our societies. There is a battle, a struggle between civilization and culture, as I’ve mentioned before. Civilization crucifies poetry, symbolically, of course. But culture and poetry have this faculty of always rising up in all times and preserving the timeless truths of the human person.

How would you describe the faith of the Georgian people?

It is well known that we, from the beginning, have lived in the circle of Islamism, and we’ve always been forced to defend our faith. This is the history of my country, and this is the origin of that fire, this passion of ours in defending Christianity. That fire still burns; it is very much alive in Georgia. For us, the tradition is Christianity, and it’s about passing this fire on to the next generation, instead of worshipping the ashes.

As a Christian and a politically engaged poet, how did you experience the Armenia-Azerbaijan conflict in the Nagorno-Karabakh region, that is close to your country?

We have been mediating between the two countries and peoples for some time now. They are both our friends and historical neighbors. Our prime minister, in recent months, has had very effective mediations for peace in the Caucasus. During the conflict, I couldn’t position myself only from a Christian perspective, because when the blood of human being is shed, one cannot make such considerations.

The international press has recently reported the political crisis and popular outrage in Georgia after the arrest of former president Mikheil Saakashvili, who also went on a hunger strike for weeks. What is your view on the situation?

There are very serious charges against the former president. Some of the Georgian people consider that because he used to be a president, he doesn’t have to answer to these charges; but I believe that among citizens, there shouldn’t be higher categories that can absolve themselves from the laws and second-class citizens who are held accountable for their acts. The law is the same for everyone. As a Christian, I can say that we are all equal before God.

The current government, in my opinion, is very open to freedom of expression, which was not the case at the time of the former president, who also used to control the press. It is important to point this out because there is a lot of false information circulating.

Can you tell us about your next literary project?

I always work without plans. The poet’s destiny is like this: Every moment, every minute counts; you write something — then you stop to think again. You can maybe catch some details that people around you might not catch.

Here is my perception of my special vocation: While during the Eucharist, the bread and wine become the Flesh and Blood of Christ, the very simple words, the prayers of the poet, can become poetry. That is what I will continue to give to this world.