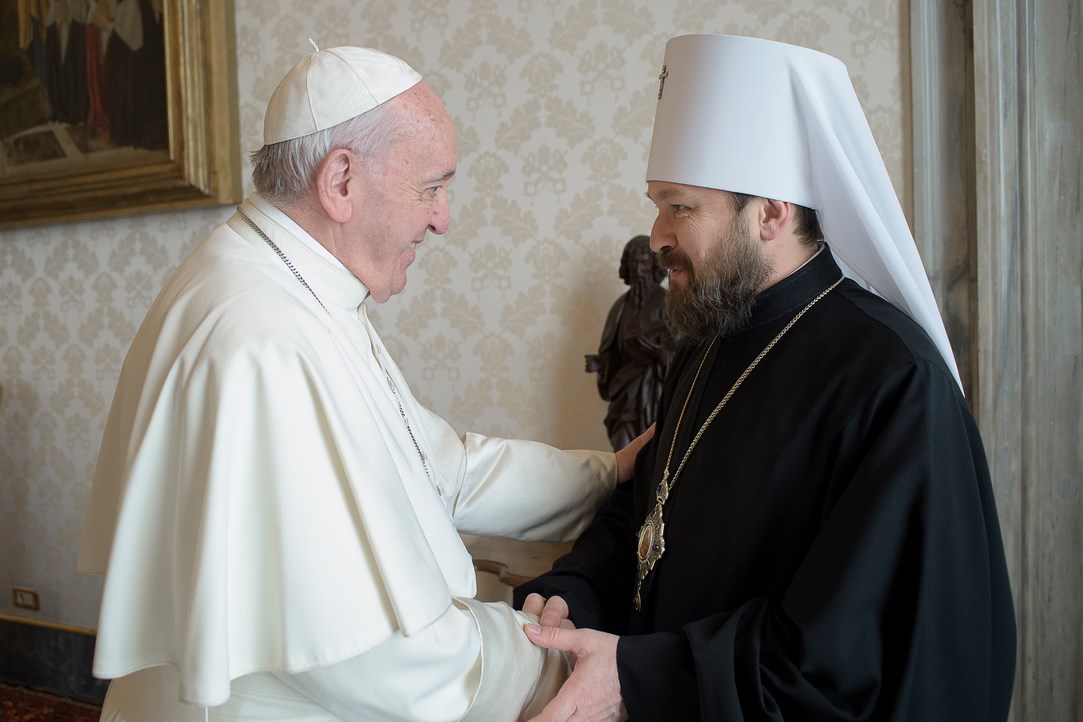 Metropolitan Hilarion, the “foreign minister” of the Russian Orthodox Church, met this morning in Rome with Pope Francis for about one hour.

Here is a link from the Moscow Patriarchate web on the meeting, link.

The patriarchate’s account does not specifically mention whether a possible meeting between the Pope and Patriarch Kirill of Moscow, head of the Russian Orthodox Church, during 2022 was discussed.

But other news outlets are now reporting that a possible meeting of the two was part of the discussion.

At a time when tensions between Russia and the West seem to be increasing, such a meeting would be a hopeful sign for the world, and for Catholic-Orthodox.

VATICAN CITY (CNS) — Pope Francis met with Metropolitan Hilarion of Volokolamsk, head of external relations for the Russian Orthodox Church, for an hour at the Vatican Dec. 22.

The two met “in a spirit of fraternity” and discussed a number of issues “of common concern” as well as the shared desire and commitment to seek responses that were “concrete, humane and spiritual,” according to a communique by the Vatican.

While the Vatican statement made no mention if they also discussed a possible encounter between the Pope and Patriarch Kirill of Moscow, the pope had told reporters Dec. 6 that he was meeting with Metropolitan Hilarion end of December and that he hoped that meeting would lead to an encounter soon between him and the patriarch.

“A meeting with Patriarch Kirill is not far from the horizon,” the pope had told reporters.

“I am always available, I am also willing to go to Moscow: to talk to a brother, there is no need for protocols. A brother is a brother before all protocols,” he had said, and, like brothers, “they belong to the same Mother, Mother Church,” even when they are “a bit divided.”

At the Dec. 22 meeting, the pope and Metropolitan Hilarion also exchanged gifts and thanks for well-wishes for recent birthdays. The pope turned 85 Dec. 17 and Patriarch Kirill celebrated his 75th birthday Nov. 20.

“The pope expressed his feelings of affection and closeness to the Russian church and Patriarch Kirill,” recalling their “journey of fraternity” and meeting in Havana in 2016, the Vatican said.

Metropolitan Hilarion gave the pope an icon of Our Lady of the Sign and Pope Francis gave the metropolitan a mosaic of Our Lady of the Ladder or of the “synkatabasis,” which represents the Mother of God with her son, as well as a number of papal documents including the World Day of Peace message for Jan. 1, 2022.

On December 22, 2021, Metropolitan Hilarion of Volokolamsk met with Pope Francis of Rome at the Paul VI Audience Hall in the Vatican.

In the beginning of the conversation, Metropolitan Hilarion, speaking on behalf of His Holiness Patriarch Kirill of Moscow and All Russia, congratulated the Primate of the Roman Catholic Church on his 85th birthday.

Pope Francis greeted His Eminence and expressed cordial gratitude to His Holiness Patriarch Kirill for the congratulation and for the invariably high level of cooperation.

During their prolonged meeting held in a warm atmosphere, the sides discussed a wide range of issues standing on the agenda of the bilateral relations between the Roman Catholic Church and the Russian Orthodox Church, as well as particular aspects of interaction in the nearest future.

In conclusion of the meeting, Metropolitan Hilarion conveyed to Pope Francis the congratulatory message from His Holiness Patriarch Kirill of Moscow and All Russia and an Icon of the Mother of God of the Sign. Presenting this gift, the DECR chairman stressed that this icon is held especially dear by the Primate of the Russian Orthodox Church, since the church of the St. Petersburg Theological Academy, which he graduated and of which he was rector for ten years, keeps a venerated copy of this image of the Most Holy Mother of God.

An Agence France-Presse report, citing remarks by Hilarion to Tass, was even more insistent that today’s meeting did discuss a Pope-Kirill meeting in 2022:

VATICAN CITY, Holy See — Pope Francis met with a top aide to Russian Patriarch Kirill in the Vatican Wednesday, with the Moscow church saying a meeting between the spiritual leaders is being planned for 2022.

It would be the pair’s second meeting, after they held a historic summit in Cuba in 2016. The plans come as tensions between Moscow and the West are soaring over Ukraine.

“This morning, the Pope met with Metropolit Hilarion Alfeyev,” the head of the Holy See’s press office Matteo Bruni, said in a statement.

The pair spoke for about an hour “in a brotherly spirit” and discussed “subjects of common concern,” he said.

Hilarion then told the Russian state news agency TASS that a meeting between Francis and Kirill is in the works for 2022.

Francis said this month that he was even ready to go to Moscow—where no Pope has ever been—to meet Kirill.

In early December, Francis said that a meeting with Kirill was on “a horizon that is not far.”

The pair’s meeting in Cuba was the first encounter between the heads of the two largest Christian churches since Christianity split into Western and Eastern branches in the 11th Century—an event known as “The Great Schism.”

After meeting Pope Francis in November, the head of Ukraine’s Greek Catholic Church Sviatoslav Shevchuk said such a visit could help end the war in eastern Ukraine.

“We expect this visit to Ukraine to take place next year,” Shevchuk said, quoted by the press service of his church in early December.

Moscow’s Bishop Hilarion shot down the initiative, saying he doubted the Vatican would approve such a trip. — Agence France-Presse

Note to all readers: We are continuing our Christmas fund-raising drive. We hope to raise $30,000 between now and December 31 to support these letters, interviews, videos, and analyses during the upcoming year. We have raised $1,855 thus far. Please go to this link to make your donation.