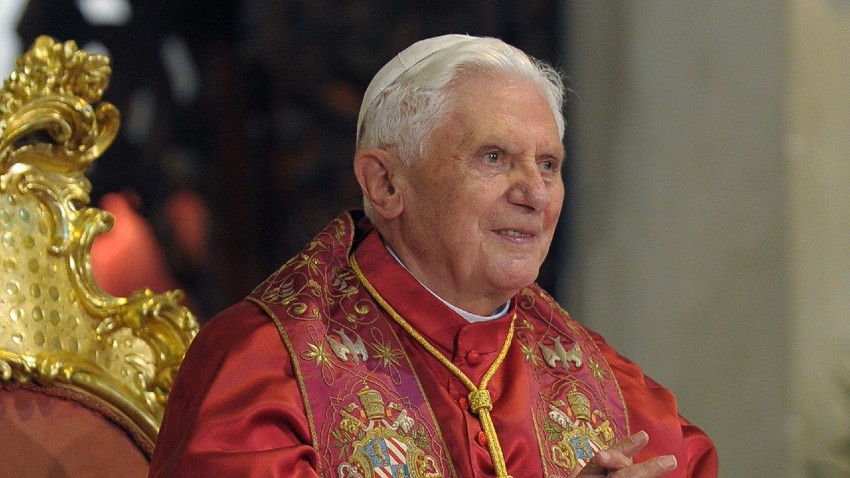 Below are two articles which I felt I should share.

The bottom essay just appeared and cites the top piece, which is a letter I wrote from Rome 10 years ago.

So, first, a letter I sent 10 years ago… then, another essay, which cites that letter of 10 years ago, and then goes on to speak in a thoughtful way about Benedict’s pontificate, his resignation, and the Church today. —RM

P.S. The video just below has to do with an interview with Archbishop Gänswein, which I discussed in my last letter, just a few minutes ago… All comment, correction, and criticism are welcome…

Driving down a street near the Vatican about two hours ago, late Monday afternoon, as the shadows had just begun to lengthen, I saw someone I recognized, standing by a light, waiting to walk across the street.

I knew him. We had spoken together on occasion in the past.

“No,” I said to myself, “I’ll leave him alone. He has a right to his privacy. He’s going in to the Conclave tomorrow; there is no need to stalk him. I’ll just let him have his last quiet walk before the Conclave.”

“No,” I said, “there is a reason he is right here on the corner, just waiting for the light to change, just as I am here…”

“Ok,” I said, “but I won’t ask him anything, I’ll just say one thing to him. Just one thing, that’s all. I’ll say I loved Pope Benedict.”

I took my decision. I turned the steering wheel hard, pulled the car up onto the curb, turned off the key, jumped out of the car, slammed the door, hit the clicker to lock the vehicle, and jogged to the other side of the street so I could meet him as he came across. A motorcycle almost hit me as I ran.

I reached the other side, turned and looked back. The cardinal was still standing quietly on the other side of the street. Surrounding him now was a small group of young people who were visiting Rome on what seemed to be a school tour. He stood in the middle of them. They did not recognize him. He was dressed as a simple clergyman.

The light changed and the whole group, about 20 young people with an old man in the middle, with a little space on each side of him, began to walk across the street.

About half-way across, he saw me, saw that I was looking at him. I tried to gauge whether he was in some way disturbed to see me, whether he was avoiding meeting my eyes, to signal that he just wanted to be left alone. But he met my eyes, directly.

“He recognizes me,” I thought. “It doesn’t mean he will discuss the Conclave with me — of course, he will keep the secret — but he will greet me.”

So I took three steps into the street and stretched out my hand. I still wondered if he would be cold toward me, and be unwilling to even begin a conversation. But I was surprised. He stretched out his hand.

“Your eminence,” I said.

In his eyes he was saying to me that he could not answer any questions.

But he was not excluding all conversation. And so I ventured…

“I only wanted to tell you one thing,” I said. “That I loved Pope Benedict.”

“I did too, and I do love him,” the cardinal said.

“And so I have been troubled and a bit off balance since February 11,” I said.

And then, as if filled with a sudden emotion, I saw the cardinal’s face grow dark and sad, and he said, forcefully: “I love him, but this should never have happened. He never should have left his office.”

“It is like a man and a woman, a husband and wife, a mother and father in relation to their children,” he said. “What do they say?” It seemed he was asking me the question.

“They say, ‘until death do us part!’ They stay together always.”

So I understood him to be saying that he felt a Successor of Peter should not step down from the throne, no matter how weary and tired, but continue until death.

I felt the words he was speaking were the words of an argument that may have been used even among the cardinals, but of course, that may not be the case.

But I felt that I was catching a glimpse of how at least one cardinal was thinking about the Pope’s renunciation.

“So you will be voting tomorrow.”

He squeezed my hand. “Is there anything else I can do?” I asked.

He turned as if he needed to go.

He took a step away from me, then turned again.

“It is a dangerous time. Pray for us.”

I think we should do as he asked.

And, God willing, I will be able to send out one more reflection later this evening, about the meaning of this Conclave at this time.

Benedict XVI: The milestone that marked his pontificate (link)

On Monday, March 10, 2013, one day before the start of the conclave that would elect Cardinal Jorge Mario Bergoglio as Benedict XVI’s successor, Robert Moynihan, founder of Inside the Vatican magazine and a well-known conservative Vatican supporter, passed near the Vatican with a old cardinal. Aware that he would not answer any questions about the conclave that was about to begin, he limited himself to greeting him and commenting that he was very fond of Benedict XVI. To which, the cardinal with an expression of sadness and concern – as Moynihan recalled – replied: “Me too, but this should never have happened, he should never have left his position.” And after a silence, he continued: “It’s like a man and a woman, a husband and a wife, a father and a mother… what do they say?… they say, ‘until death separate them’. They stay together forever.”

The episode is probably the one that best reflects the atmosphere in the Vatican between February and March 2013, after learning of Benedict XVI’s decision to resign from office. “We are living in difficult times, please pray for us,” the cardinal asked before saying goodbye to Moynihan that night. It was the first time that a Pope voluntarily resigned in more than 700 years, since Celestine V decided to abdicate the throne of Saint Peter after a few months in office. It was an “exceptional” decision, as the Pope Emeritus himself pointed out in one of his extensive interviews with the German journalist Peter Seewald, where he also detailed the behind the scenes of his decision, ruling out alleged pressures for him to leave office, such as some vaticanistas have assured. “Nobody tried to blackmail me. If that had happened, I would not have left, ”he assured.

His resignation surprised everyone, or almost everyone – only four people were aware of his decision – that February 11, 2013, when he announced it in the consistory room, in front of the college of cardinals gathered to find out the dates of the next canonizations. “After having repeatedly examined my conscience before God, I have come to the certainty that my strength, given my advanced age, no longer corresponds to those of an adequate exercise of the Petrine ministry. […] For this reason, and fully aware of the seriousness of this act, I freely declare that I resign from the ministry of Bishop of Rome, successor of Saint Peter”, he said in Latin, making it difficult for many to immediately understand his announcement, until Ansa news agency journalist Giovanna Chirri broadcast the news to the world.

The information unleashed a veritable earthquake, raising all kinds of speculation about the real reasons for his resignation. Speculations that not even the subsequent explanations of the Pope Emeritus himself helped to clear up. The reason: the event occurred in the midst of the so-called Vatileaks scandal, about the leaking of papal documents by the personal secretary of the pontiff Paolo Gabriele – who assured that he had done it to protect the Pope himself from pressure from the Curia. A situation that even led Benedict XVI to appoint a special commission of three cardinals to investigate the issue in April 2012, whose report was never made public. According to the journalist Gianluigi Nuzzi, behind the resignation were the growing power disputes within the Roman Curia itself.

The resignation also generated an unprecedented scenario in the Catholic Church and a debate that is not completely closed on the condition of Benedict XVI. The Vatican Constitution does not establish the existence of a Pope Emeritus, a quality that is only conferred on bishops after renouncing their dioceses due to age following the provisions of the Second Vatican Council. For this reason, some maintain that Joseph Ratzinger should have returned to his status as bishop after resigning, and could not continue wearing the white cassock typical of the Popes. However, according to Benedict XVI’s secretary, Archbishop Georg Ganswein, Ratzinger renounced his papal role, but not his status as Pope, a subtlety that gave rise to another debate, that of the unprecedented existence of two Popes in the Catholic Church. Pope Francis himself continued to call Benedict “His Holiness of him” until his death.

Despite the above, Joseph Ratzinger tried to disprove all speculation about his resignation in the later years. As he told Peter Seeweld, he began to meditate on the decision to step aside after the trip to Cuba and Mexico in 2012, because his doctor told him that he would not be able to make a new transatlantic flight, which would prevent him from going to the World Day of Youth in Brazil in 2013. “It was clear that I had to resign in time for the new Pope to plan that trip,” he commented. For this reason, in the summer of 2012 he made the decision and wrote his speech of resigns only “about 14 days before making it known.”