“The Lord is calling me ‘out to the mountain’ to devote more time to prayer and meditation, but this does not mean I’m abandoning the Church.” –Pope Benedict XVI, in his final Sunday Angelus address as Pope, at noon today in St. Peter’s Square

The Sun Broke Through at Noon 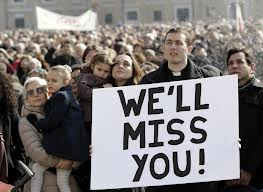 This morning dawned grey and cold in Rome, but the sun broke through the clouds just at noon, as Pope Benedict came to the window of the papal apartment to pray the midday Angelus. Below him was a vast crowd, filling the piazza and overflowing into via della Conciliazione, estimated at as many as 200,000 people.

After the Angelus, walking with some friends toward the press office, I went in to pick up a copy of the Pope’s remarks.

There I saw Ignazio Ingrao, the author of the report in Panorama which was the basis for the La Repubblica report which rocked the world on Thursday, February 21, with its claim that a secret Vatican report, prepared by three eminent cardinals between April and December 2012, and given to the Pope on December 17, had revealed the existence of a number of influential, entrenched lobbies and factions within the Curia, contributing to Benedict’s decision to resign.

Ingrao walked out the door of the press office. I caught up to him just outside the door as a journalist holding a microphone and a cameraman with a TV camera on his shoulder came up to him. They were with a Polish television station. “Could we talk for a moment?” I asked Ingrao. “Sure,” he said. “Just give me five minutes to do this interview.”

While he gave his interview, I thought over the Pope had said during the Angelus, and to the Curia yesterday at the end of the week-long Spiritual Exercises…

“I will always be near you” 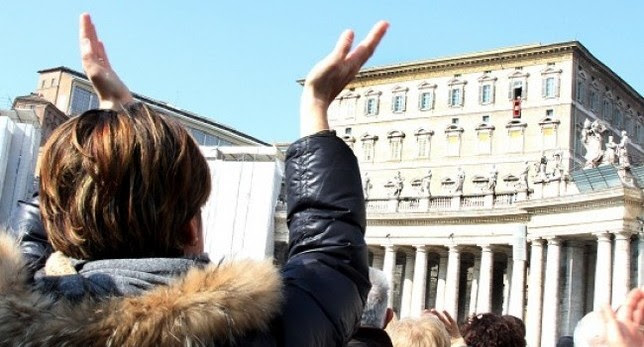 Today was dramatic. All around St. Peter’s Square, crowds flowed in for the final Angelus of Pope Benedict’s pontificate. Cars along via delle Fornaci were double-parked and there was not a single space left open along the usually half-empty walls going up the Janiculum hill on the winding via delle Mura Aurelie. 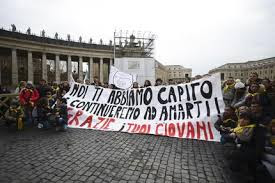 When the Pope appeared, just at noon, at his studio window, some 200,000 pilgrims had gathered, despite fairly cold conditions, in St. Peter’s Square to express their gratitude to the Pope for his eight-year pontificate.

(A sign in the Square. It says: “We have understood you. We will continue to love you. Thank you! Your young people”)

Benedict XVI spoke clearly about his retirement. In Italian he said that he felt God was asking him to serve the Church in a way that’s “more appropriate for my age and strength.”

But was there a hint in his remarks of the reason for his decision?

Here is an attempt to read “between the lines” of the Pope’s final Angelus remarks. 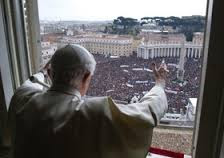 “During the Mass on the second Sunday of Lent, the Gospel of the Transfiguration of the Lord is always presented.

“Luke, the evangelist, has highlighted the fact that Jesus transfigured while he prayed.”

Here was a first possible glimpse into the Pope’s mind. “While he prayed.”

The Pope is about to step down from his papacy, on Thursday, in four days, and will devote his life to prayer. He will follow the same path that Jesus followed, when Jesus devoted himself to prayer, prior to his Transfiguration…

Benedict continued: “His is a deep, profound experience of relationship with the Father during a sort of spiritual retreat that Jesus lives on a high mount accompanied by Peter, James and John, the three disciples who were always present during the moments of the divine manifestation of the Master.”

Benedict, too, is about to begin a “spiritual retreat,” one which will last from now until the end of his life. He will live, in fact, “on a high mount” (the convent he will live in is up a steep hill in the Vatican gardens), accompanied by the four Italian “Memores Domini” (literally, “Rememberers of the Lord,” those who are consecrated to always be mindful of the Lord) who will keep his house and kitchen, and by his personal secretary, Archbishop Georg Gaenswein.

“The Lord, who not long ago had proclaimed his death and resurrection, offers the disciples an anticipation of his glory. And in both the transfiguration and the baptism, the voice of the heavenly Father echoes: ‘This is my son, the chosen one, listen to him!’ The presence of Moses and Elias later on, representing the laws and the prophets of the ancient covenant, is far more important: All the story of the covenant is oriented towards Him, the Christ, who fulfills a new exodus not towards the promised land as during the times of Moses but towards Heaven.”

Benedict, in these lines, is, of course, speaking about Christ, and not his own experience or future life.

Still, in the last words, he does indicate one of the central thoughts that he has always stressed, and that clearly still remains central to him: that the resurrected Christ “fulfills a new exodus” which leads “not towards the promised land… but towards Heaven.” He is emphasizing that all earthly things, in the end, must be left behind.

He continued: “St. Peter’s intervention: ‘Master, it is beautiful for us to be here’ represents the impossible attempt to stop such mystical experience.”

The Pope does not explain here that Peter’s words express a desire to set Jesus on the same level as the prophets, not understanding that Jesus is about to be revealed, mystically, on an entirely different level, as divine.

I once asked the Pope, when he was still Cardinal Ratzinger, whether he was a mystic. He told me no, not in the sense of experiencing in any sensible way the mystical presence of God. I was therefore struck by the expression he chose here: that it is “impossible… to stop such mystical experience.” There seems a hint in this that the Pope is saying that he feels called to be drawn even more intimately, mystically, into the very life of God, something that only a life completely devoted to prayer can bring.

The Pope continued: “St. Augustine has commented: ‘[St. Peter]… on the Mount… had Christ as the food for his soul. Why then should he have descended to return to exhaustion and pain, while above he was filled with feelings of sacred love towards God, which inspired him to a holy life.’ (Discourse 78:3), ”

I was moved by these words. I took them to be a direct reference to what he is now experiencing. The Pope is Peter. He is referring to himself. Why should he descend from the mountain of prayer to the place of “exhaustion and pain” when he can, in continual prayer, be “filled with feelings of sacred love towards God,” feelings which will inspire him “to a holy life”?

Benedict is seeking the way of holiness in a life of continual prayer.

Then he said: “Pondering over this fragment of the Gospel, we can draw a very important lesson: First of all, the supremacy of prayer, without which all apostolate endeavors, and all acts of charity, are reduced to activism.”

He could not have been clearer.

He was telling us that prayer (i.e., a relationship with God) is supreme, that it is critical, essential, that prayer precede, inform and follow “all apostolic endeavors” and “all acts of charity.”

By prayer he means an immersion in God, in God’s will, in God’s life. Without this connection, all action is “reduced to activism.” It remains in some way on the human plane.

He continued: “During Lent, let us learn to give the right time to prayer, both personal and community prayer, which breathes air into our spiritual life. However, praying does not mean isolating oneself from the world and its contradictions, as St. Peter would have liked to have done on Mount Tabor, but prayer leads us back to the path, to action.”

Here, I could not find a way to interpret the words as referring to his own choice and future life, since it does not appear that his life of prayer will ever lead again to “action.” But could the Pope intend to “act” after immersing himself in prayer? If so, in what way?

In the next lines, I found the hint of an answer.

The Pope said: “Christian existence — I have written in the Message for this Lent — means to continuously climb up the mount for our encounter with God, so that afterward we can descend again filled with His love and strength to serve our brothers and sisters with the very love of God.”

He was saying that he, and every one of us, should “climb up the mount for our encounter with God” in order to be “filled with His love and strength” in order to be able to “serve” with “the very love of God.”

Benedict is saying that he will seek God’s face in prayer, seek to converse with God, to be in communion with God, in order to be filled with the very love of God.

And then the Pope said that this interpretation is actually one he intends, that he is referring to himself in these words.

“Dear Brothers and sisters,” he said, “this Word of God I feel in a particular way towards me, at this moment in my life. The Lord is calling me to ‘climb the mount,’ and to devote myself to meditation, reflection and prayer.”

So, he is going to imitate Christ, and go up the mountain. He is seeking mystical union with God. He is seeking the highest possible thing any man can seek.

“However,” he continued, “this does not mean abandoning the Church, but rather, if God has requested this of me, it is so that I can continue to serve the Church with the same dedication and the same love with which I have done up until now, but in a way adapted to my age and my strength.”

Benedict could not be much clearer. He is teaching the whole Church, and the world as well, by his decision to resign and devote himself to prayer.

He is telling all of us that the “pearl of great price,” the most important thing of all, for him, and for each one of us, is our relationship with the eternal one, the Holy One, God.

It is his final, greatest teaching. (Until his final audience, on Wednesday.)

If we follow Benedict in this, the Church will be healed.

If we follow Benedict in this, no matter how “besmirched” or “distorted” the Church’s face may be from sins of all types, from human weaknesses, and from the unwillingness to repent of those weaknesses and to seek God’s forgiveness, and in that forgiveness, the cleansing that leads to new life, the Church will be healed.

This is the way forward.

This is Benedict’s message to us.

And he concluded: “Let us invoke the Virgin Mary’s intercession: Let her guide all of you to follow the Lord Jesus always, in prayer as well as in works of charity.”

Videos of the Angelus

Here is a link to a Rome Reports video on the Angelus: http://www.romereports.com/palio/popes-last-angelus-i-will-not-abandon-the-church-i-will-serve-in-a-different-way-english-9145.html#.USptwY5qeqE

Here is a second link, which contains the words he spoke in English, and the actual words of his final Angelus blessing: http://www.romereports.com/palio/benedict-xvi-i-am-not-abandoning-the-church-english-9143.html#.USpudI5qeqE

Ingrao’s TV interview actually took 15 minutes. When he was done, we went to the Bar San Pietro, on the via della Conciliazione, a few steps from the press office, to have a cappuccino, and a serious conversation…