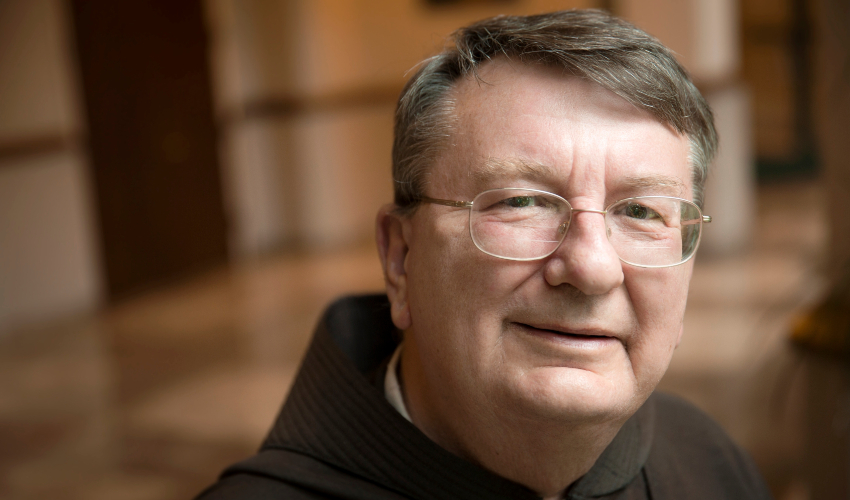 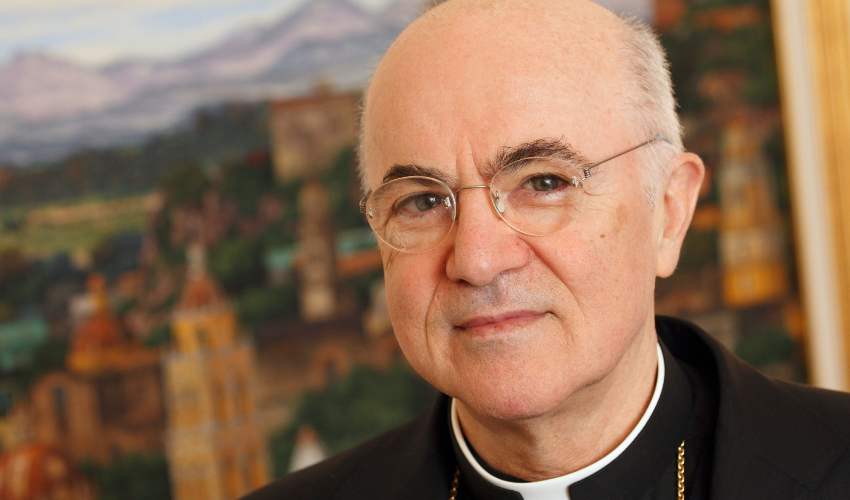 Two Churchmen who are thinking about the meaning and impact of the Second Vatican Council on the life of the Church. Left, Franciscan Capuchin Father Thomas Weinandy and, right, Italian Archbishop Carlo Maria Viganò.

In the issue of Inside the Vatican magazine currently going to press, we are publishing a Dossier in which several Catholic thinkers reflect on the meaning and impact of the Second Vatican Council (1962-1965), some 55 years after the Council ended.

Archbishop Carlo Maria Viganò touched off the discussion with an essay he published two months ago with a letter on June 9 (link) in which he suggested that, because of the many ambiguities in the Vatican II texts, and the negative effects those ambiguities have since had on the Church — widespread confusion about doctrine, abandonment of religious life by thousands, neglect of the sacraments by millions — it might be prudent for the Church to simply set aside all of the texts of that Council.

[Here are links to other texts in the Dossier: Letter #15 (Cavadini), Letter #14 (Weinandy), and Letter #13 (Esolen). I also encourage you to subscribe to the magazine and receive the print version of this Dossier.

Viganò had said that which cannot be said in the Church today. For in the post-Conciliar Catholic Church, and especially in the Vatican, the affirmation that the Council brought a positive “new era” for the Catholic Church, a “new springtime,” has become a dogma that cannot be questioned.

Viganò did not claim that he himself was without blame.

In fact, he openly confessed that he had for many years accepted the ambiguities of the conciliar texts without any real hesitation.

He wrote: “Just as I honestly and serenely obeyed questionable orders sixty years ago, believing that they represented the loving voice of the Church, so today with equal serenity and honesty I recognize that I have been deceived. Being coherent today by persevering in error would represent a wretched choice and would make me an accomplice in this fraud.”

And he added: “Claiming a clarity of judgment from the beginning would not be honest: we all knew that the Council would be more or less a revolution, but we could not have imagined that it would prove to be so devastating.”

Today Viganò emailed me an “open letter” that he has written to one of the authors of the essays in the dossier, Father Thomas Weinandy, (O.F.M Cap.)

The letter is one of the strongest Viganò has yet written. Here below is the complete text of his letter. 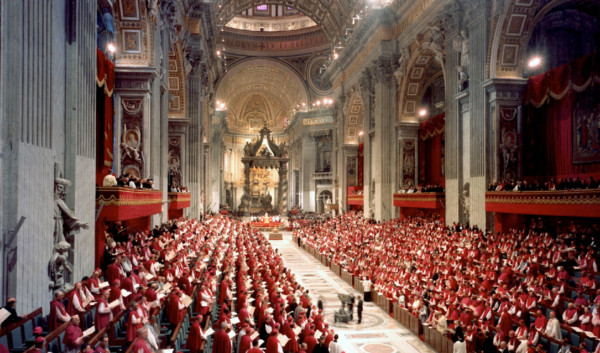 I read attentively your essay Vatican II and the Work of the Spirit which was published at Inside the Vatican on July 27, 2020 (here). It seems to me that your thoughts may be summarized in these two sentences:

I sympathize with many of the concerns expressed and acknowledge some of the stated problematic theological and doctrinal issues enumerated. I am, however, uncomfortable with the conclusion that Vatican II is, in some way, the direct source and cause of the present disheartening state of the Church.

Permit me, Reverend Father, to respond to you by using as an auctoritas one of your interesting writings, Pope Francis and Schism, published at The Catholic Thing on October 8, 2019 (here). Your observations allow me to highlight an analogy that I hope may contribute to clarifying my thought and demonstrate to our readers that certain apparent differences may find resolution thanks to a profitable disputatio that has as its primary purpose the glory of God, the honor of the Church, and the salvation of souls.

In your essay Pope Francis and Schism, you observe, very appropriately and with the acumen that distinguishes your interventions, that there is a sort of dissociation between the persona Papae and Jorge Mario Bergoglio, a dichotomy in which the Vicar of Christ is silent and lets things drop, while the exuberant Argentine man who today lives at Santa Marta speaks and acts. Referring to the very grave situation of the Church in Germany, you write:

First, many within the German hierarchy know that by becoming schismatic they would lose their Catholic voice and identity. This they cannot afford.  They need to be in fellowship with Pope Francis, for he is the very one who has fostered a notion of synodality that they are now attempting to implement. He, therefore, is their ultimate protector.

Second, while Pope Francis may stop them from doing something egregiously contrary to the Church’s teaching, he will allow them to do things that are ambiguously contrary, for such ambiguous teaching and pastoral practice would be in accord with Francis’ own.  It is in this that the Church finds herself in a situation that she never expected.

It’s important to bear in mind that the German situation must be viewed within a broader context: the theological ambiguity within Amoris Laetitia; the not so subtle advancing of the homosexual agenda; the “re-foundation” of the (Roman) John Paul II Institute on Marriage and Family, i.e., the undermining of the Church’s consistent teaching on moral and sacramental absolutes, especially with regard to the indissolubility of marriage, homosexuality, contraception, and abortion.

Similarly, there is the Abu Dhabi statement, which directly contradicts the will of the Father and so undermines the primacy of Jesus Christ his Son as the definitive Lord and universal Savior.

Moreover, the present Amazon Synod is teeming with participants sympathetic to and supportive of all of the above.  One must likewise take into account the many theologically dubious cardinals, bishops, priests, and theologians whom Francis supports and promotes to high ecclesial positions.

What the Church will end up with, then, is a pope who is the pope of the Catholic Church and, simultaneously, the de facto leader, for all practical purposes, of a schismatic church.  Because he is the head of both, the appearance of one church remains, while in fact there are two.

Let’s try to replace the Pope with the Council, and Bergoglio with Vatican II: I think that you will find the almost literal parallel that results quite interesting. In fact, Catholics nourish veneration and respect for both the papacy and for an ecumenical council that the Church asks of them: on the one hand towards the Vicar of Christ, and on the other hand towards an act of the Magisterium in which the voice of Our Lord speaks through the Roman Pontiff and the bishops united to him. If we think of Saint Pius V and the Council of Trent, or of Pius IX and Vatican I, it will not be difficult to see the perfect correspondence between those popes and the papacy, and between those councils and the infallible Magisterium of the Church. Indeed, even thinking of a possible dichotomy would rightly fall under canonical sanctions and offend the pious ears of the faithful.

And yet, as you yourself point out, with Jorge Mario Bergoglio wearing the surreal garments of the Successor of the Prince of the Apostles, “The only phrase that I can find to describe this situation is “internal papal schism,” for the pope, even as pope, will effectively be the leader of a segment of the Church that through its doctrine, moral teaching, and ecclesial structure, is for all practical purposes schismatic.”

I ask then: if you admit, dear Father Thomas –  as a painful trial to which Providence is subjecting the Church in order to punish her for the faults of her most unworthy members and especially of her leaders – that the Pope himself is in a state of schism with the Church, to the point of being able to speak of an “internal papal schism”, why can you not accept that the same has happened for a solemn act like a Council, and that Vatican II was a case of “internal Magisterial schism”? If it is possible for this Pope to be “for all practical purposes schismatic” – and I would say also heretical – why could not that  Council also have been so, despite the fact that both one and the other were instituted by Our Lord to confirm the brethren in Faith and Morals? I ask you, what prevents the Acts of Vatican II from deviating from the path of Tradition, when the Supreme Pastor himself can deny the teaching of his Predecessors? And if the persona Papae is in schism with the papacy, why could a council that wanted to be pastoral and abstained from promulgating dogmas not be able to contradict the other canonical councils, entering into a de facto schism with the Catholic Magisterium?

It’s true that this situation is a hapax, a case that in itself has never been seen in the history of the Church; but if this applies to the papacy – in a crescendo from Roncalli to Bergoglio – I do not see why it could not apply for Vatican II, which precisely thanks to the recent popes has set itself as an event in itself, and as such has been used by its proponents?

To use your words, “What the Church will end up with” is a Council that is a Council of the Catholic Church and, simultaneously, the de facto first council, for all practical purposes, of a schismatic church, or the “conciliar church” that considers itself to have been born at Vatican II. Since Vatican II is both an ecumenical council and a “devil council” [conciliabolo], it retains the appearance of being a single Council, when in reality there are two. And I would add: one council was legitimate and orthodox and was aborted from birth with the subversion of the preparatory schemes, and one council was illegitimate and heretical (or at least favens haeresim) and is the one to which all of the Innovators refer, including Bergoglio, in order to legitimize their doctrinal, moral and liturgical deviations. Exactly as “many theologically dubious cardinals, bishops, priests, and theologians whom Francis supports and promotes to high ecclesial positions” maintain that the authority of the Vicar of Christ should be recognized in the acts of governance and magisterium performed by Jorge Mario, right at the moment in which with those acts he demonstrates himself “for all practical purposes schismatic.”

So it seems to me, Reverend Father, that you may find confirmation of what I affirmed in my essay at the origin of the disputatio on the Council, namely that the “container-council” was used to give apparent authority to a deliberately subversive event, exactly as today, right before our eyes, the Vicar of Christ is used to give apparent authoritativeness to a deliberately subversive operation. In both cases, the innate sense of respect towards the Church of Christ on the part of the faithful and the clergy is being used as an infernal stratagem – a Trojan horse introduced into the Sacred Citadel – in order to dissuade every form of dutiful dissent, every criticism, every legitimate denunciation.

It is painful to observe that this observation, far from rehabilitating Vatican II, confirms a profound crisis of the entire ecclesiastical institution, effected by the work of renegades who have abused their own authority against the Authority itself, of papal power against the papacy itself, and of the authority of the Conciliar Fathers against the Church herself. A devious and cowardly betrayal operated from within the Church herself, as Saint Pius X had already predicted and condemned in the Pascendi encyclical, indicating the modernists as the most harmful enemies of the Church.

Let’s not forget that Dante places the fraudulent in the Ninth Circle of Hell.

The people of Beirut are in need of assistance and we have spoken with our friends, the Maronite Monks, about how we can help. You can make a tax-deductible donation here and all donations will go to the Maronite Church in Lebanon in order to assist those who are in need in Beirut, Lebanon.