“The priest’s strength does not come from external means of power.” —Archbishop Georg Gänswein, personal secretary of Emeritus Pope Benedict XVI, in a homily at the ordination of four new priests in Austria on April 27 (link)

A reflection on the priesthood

Emeritus Pope Benedict XVI’s personal secretary, Archbishop Georg Gänswein, on April 27 offered a thoughtful reflection on the priesthood during a homily he delivered at an ordination Mass in Austria.

At a time when the very concept of the priesthood as a central Christian mystery (sacrament), has unfortunately fallen under a certain shadow (in some measure due to the abuse scandal and the reporting on the abuse scandal), this homily is a useful reminder of the essential nature of the priest: to be an “alter Christus” (“another Christ”).

That is, to be at once a priest, a prophet, a king — and a servant who offers his life, and his own personal desires, for the life and safety (salvation) of others, in this redeemed but still-fallen world.

One essential point of Gänswein‘s homily: the fidelity of a priest to the Church’s perennial teaching and tradition — to what has been handed down from the beginning, to what had been held as true by all, everywhere, in all times — this fidelity is a good and noble thing.

And, since this is so, he argues, the desire to “invent a new Church” different from the Church of our fathers is a temptation which, though perhaps understandable, must be resisted.

He compares this fidelity to that of a simple lighthouse keeper.

A lighthouse keeper fulfills his task by keeping the lighthouse lit, always in the same place.

The lighthouse is useful precisely because it never moves.

Any attempt to move the lighthouse — perhaps out of a desire to bring the lighthouse closer to those sailing on the sea — would only confuse those at sea, who look to the light of the lighthouse, never moving from its place, to orient their course even in the most difficult seas and storms.

So the lighthouse keeper remains at his post, and in so doing, offers help and safety to all seafarers, in all weather, in all storms.

Some see in the archbishop’s words a certain inspiration from the thought of the Emeritus Pope, but this is never made explicit in the homily.

Here follows a summary of the homily prepared by Maike Hickson for LifeSiteNews. (link)

He who works to ‘invent new Church…abuses his spiritual authority’

In his homily, Gänswein spoke of the duty of the priest to remain loyal to the “truth of the Gospels” and rebuked those within the Church who wish to “invent a new Church.”

During his homily (the link is to a voice recording of the homily in German) at the April 27 ordination, the German prelate first recounted the legend of the captain of a warship who advises what he thinks is another ship but is really a “lighthouse keeper of inferior rank” to change course to avoid a collision.

While the captain, with an air of superiority, continually orders the other to change course, the lighthouse keeper calmly repeats that it is the captain who must change course.

To this, the keeper replies that he’s running a lighthouse and that it’s impossible for him to change course.

Using this image of a lighthouse keeper, Archbishop Gänswein told the four priestly candidates that they too have to be like the lighthouse and its keeper, “because priests, too, deal with the matter of keeping the course and changing the course.”

Priests, he explained, are “influencing the course of the lives of men, they steer, they change.”

“Yes,” he added, “your position is similar to the second-class lighthouse keeper.”

Unlike some of the powerful ships in the sea, the lighthouse itself “has no warships,” the prelate explained.

So, too the priest, whose “strength does not come from external means of power.”

They lead people and guide them, “by simply proclaiming the Truth that has become Incarnate in Jesus Christ,” he added.

As Gänswein stated, a priest “is not strong out of his own power,” he only has strength inasmuch as he “gives witness to the truth.”

People should change their ways because they have come in contact with the “truth of the Gospels,” just as a ship has to change course when coming in contact with a lighthouse.

Since God entrusted that truth to His Church, the Church may “not proclaim anything else but that truth, be it in season or out of season.”

While a priest might hear voices similar to the captain of the warship ordering the lighthouse to change course, added the German archbishop, he has to give a “simple answer,” that of the “beauty and truth of the Faith,” to advise people to go the right path to “eternal salvation.”

Archbishop Gänswein advises the new priests not to teach their “own good ideas, but, rather, that which God has given to us.”

It is not about “our own cherished ideas, but about salvation,” he explained.

And the “strength stems from the Sacraments.”

Thus, a priest does not need to have a “striking personality,” and he will not “make the headlines,” just like the lighthouse.

The lighthouse keeper, Gänswein stated, “would only make headlines if he would leave his post in order to do something else.”

“Only when the lighthouse keepers leave their posts, then there is disaster, and then there come the headlines.”

“And when priests, and bishops, do not anymore have the courage,” the prelate continued, “to proclaim the Gospels with strength and in its entirety, but to merely present their own words of wisdom, then there comes disaster, and then there are headlines.”

“Have we not had enough of that in recent times?” Gänswein asked, likely referring to the current revelations of clerical sexual abuse scandals that have shaken the Catholic Church and perhaps also alluding to Pope emeritus Benedict XVI’s own letter on the moral and doctrinal roots of the current abuse crisis.

This is at least what Kathpress, the news website of the Austrian bishops thought.

In a April 28 report on these words, Kathpress noted: “The background for these statements might very well have been the discussions about a controversial [sic] text of Benedict XVI, in which the retired Pope in the end presented a personal accounting and analysis of the abuse scandal and its consequences for the Church.”

Kathpress also states that Heiligenkreuz, as a priestly seminary, has currently 314 students and thus “is among the largest places for priestly formation in Europe.”

Making another indirect reference to a recent discussion as launched by Bishop Heiner Wilmer who claimed that “abuse of power is in the DNA of the Church,” Archbishop Gänswein further stated in his April 27 homily: “And he who wishes to invent a new Church and who wants to tinker with the so-called DNA, is on the wrong track and abuses his spiritual authority.”

The “holy task” is not to “draw attention to oneself,” he further explained, “not to invent anything new in order to save the Church,” but to rely on Jesus Christ Himself, something which “calls for humility, but not less courage.”

The priests, Gänswein told the priestly candidates, should have an awareness that they “are being sent,” and here they may speak “much bolder than when they speak in their own name.”

They “themselves did not invent the Gospels,” he added.

At the same time – while remaining in humility – the new priests should also be aware “that you have a dignity which distinguishes you from all those who are not priests. But you did not acquire that dignity by yourselves.”

The German prelate encouraged the new priests further by saying that “you may have the awareness to do something great, something that will not pass away.”

It is important, he added, to have courage and humility and “only to do that which is to be done and said in the name of Jesus Christ.”

That courage and humility “stem from the loyalty to the given Word and from the faith that you have something to give,” the speaker said, “and that goes beyond anything human and it contains the Divine.”

Archbishop Gänswein reminded the congregation that a priest is not an “office holder,” who fulfills certain “functions in society.” Rather, the priest “does something that no man can do out of himself.”

The priest “gives absolution for our sins in the name of Jesus Christ and speaks over the gifts of bread and wine the words of transsubstantiation,” thus opening the hearts of mankind to Grace and God.

“Priesthood is not simply an office,” the prelate added, “but a Sacrament.”

In spite of our own human weaknesses, it is important to remember the “greatness of the priesthood.”

Speaking before the ordinations in a small interview with Heiligenkreuz monastery, Archbishop Gäanswein explained that such ordinations “are one of the most beautiful experiences,” in that he can “administer to young men the Sacrament of Priestly Ordination.” “It is something very emotional,” he said, “something very theological, something very personal, and also something very Catholic.”

Final note: At the end of the article, one commenter named Joelia wrote of the homily: “Beautiful and powerful. Can we make him Pope?” 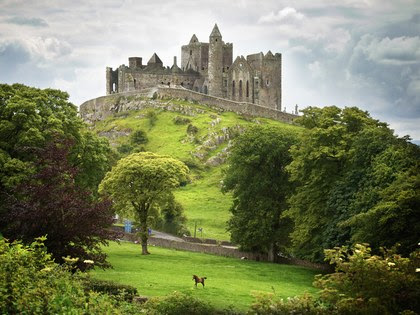 JOIN DR. ROBERT MOYNIHAN FOR AN EXTRAORDINARY PILGRIMAGE IN IRELAND IN AUGUST…