“Cast it into the fire!”

—From J.R.R. Tolkien’s The Lord of the Rings, the words of Elrond in the heart of Mount Doom, as he urges Isildur to throw the ring of power into the lake of fire where it was forged, the one place where it can be destroyed. But the ring whispers to Isildur, and he does not destroy it. Recalling that moment, Elrond says: “It should have ended that day, but evil was allowed to endure. Isildur kept the Ring.” Then he adds: “The line of kings is broken. There is no strength left in the world of Men. They’re scattered, divided, leaderless.” Then Gandalf says: “There is one who could unite them, one who could reclaim the throne…”

On Thursday, February 28, three hours before his pontificate ends, Pope Benedict will lift off in a helicopter from the highest point in the Vatican gardens and fly to the papal summer villa at Castel Gandolfo.

Then, at 8 p.m. on February 28 — the exact moment Pope Benedict has said he will cease being Pope — the Swiss Guards stationed at the main doors of the papal villa at Castel Gandolfo will withdraw and close the doors, Father Federico Lombardi, S.J., the director of the Vatican press office, said today. The Vatican police will take over the former Pope’s security.

Pope Benedict also will hand over to the College of Cardinals his “fisherman’s ring” to be broken, as is usually done upon the death of a Pope, Lombardi said. 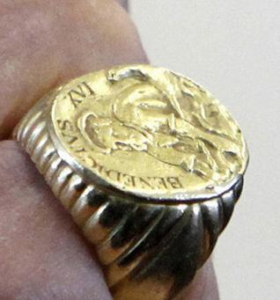 The ring is so called because it depicts St. Peter, who was a fisherman by trade, pulling up his net from a boat. The one worn by the current pontiff carries the inscription “Benedictus XVI” — the Pope’s official title in Latin.

The ring was placed on St. Peter’s tomb before the Pope first put it on. The ring has an elliptical shape representing of St. Peter’s Square, the famous piazza designed by Gian Lorenzo Bernini in the 17th century.

Lombardi said at a briefing last week that the ring would probably be “terminated” in private in the days after the resignation.

The ring contains 35 grams of gold.

The Pope will go back to wearing an episcopal ring he wore as a cardinal.

So the ring he has worn thoughout his papacy will be broken, and never worn again.

And with the breaking of the ring will come the end of the Pope’s authority, as successor of Peter, to “bind and loose” — the authority given by Jesus to Peter, in about the year 30 A.D. in Galilee, now 1,980 years ago.

It will be the first time the papal ring will be broken in this way, with its wearer still living, in nearly 700 years, almost three times as long as the United States has been a nation.

So, after 8 p.m., Benedict will no longer be “Peter,” the Bishop of Rome and the head of the Universal Church.

He will stop wearing the well-know papal red shoes, whose color symbolize the willingness of Popes to face martyrdom for their faith. Instead, he will wear brown shoes. He will begin wearing a pair of brown loafers he was given on his trip to Mexico a year ago. He says he has already tried them on and that he finds them quite comfortable.

He will be called “Pope Emeritus” or “Roman Pontiff Emeritus,” Father Lombardi said.

He will still dress in white, as a Pope does, in a simple, white cassock. And he will keep the title of address “His Holiness Benedict XVI.”

But the fisherman’s ring will be broken.

Decisions about how the Pope would be addressed and what he would wear were made in consultations between Pope Benedict and the Cardinal Secretary of State, Tarcisio Bertone, who is the Camerlendo of the Church, as well as with others, Lombardi said. 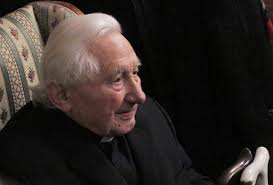 “Why did he decide to resign at precisely 8 p.m.?” I asked someone close to the Pope and to his 89-year-old brother, Georg Ratzinger (photo).

“Because he’s a morning person,” my friend told me. “By 8 o’clock in the evening, he’s usually exhausted. You can forget about it. So 8 o’clock is the time that his work day ends.

“He decided to resign on the last day of February, and at the hour when his ordinary work day comes to an end.”