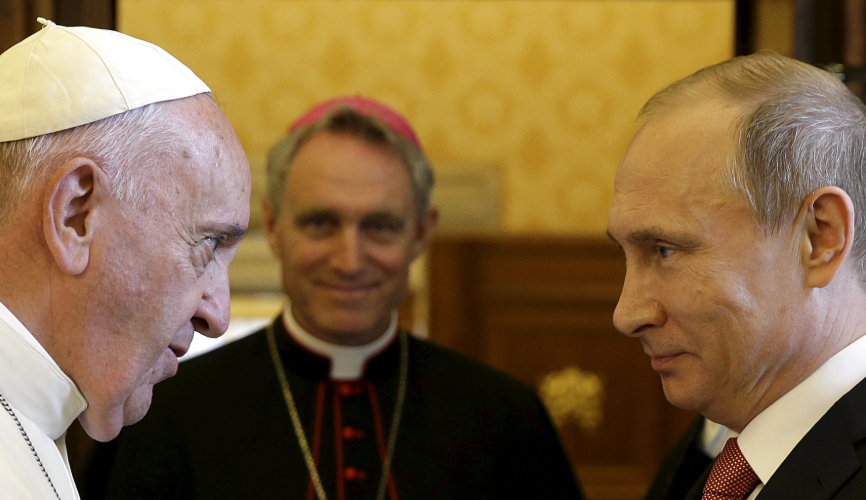 “The pontiff will receive Putin on July 5, for the third time since his enthronement in 2013, in the midst of a meeting already planned by the Holy See to discuss the situation in Ukraine.” —A Spanish news agency, today, on an upcoming meeting between Pope Francis and Russian President Vladimir Putin(link)

The characters have their roles, and the chess pieces are being moved about the board, knights and pawns, bishops and queens — the kings do not move much until the end game.

The great spiritual and political powers of the world are in motion.

Of course, the central question remains that of the human soul — as the children of Fatima were given the grace to see in their visions in 1917.

That Russia was somehow involved in the drama of the salvation of the human soul — the drama of whether the Christian faith would be eradicated, or transformed, in this modern age — was a part of the message of Fatima. But when, and how, were not made clear.

Still, when the leader of Russia comes to call on the Pope of Rome, the vicar of Christ on earth, it does seem worth noting.

In the midst of so many sad stories today, including the death of the very good and very courageous Cardinal Elio Sgreccia at age 90 — just a few hours from his 91st birthday (more on him in the next letter) — the story of the upcoming Francis-Putin meeting needs to be noted.

The Italian ambassador to Russia, Pasquale Terracciano said during a speech yesterday at the General Assembly of the Italian-Russian Chamber of Commerce, that Russia’s President Vladimir Putin will pay a visit to Italy in July.

“Obviously, this presence of the Russian ruler in Italy will also be the occasion to be received in audience by Pope Francis, an audience already requested and in preparation,” Luis Badilla, editor of Il Sismografo, a website which daily links to many news articles about the Church and the Vatican (link), then wrote today.

“For now we do not know the exact dates of Putin’s trip to Italy and therefore not even the day of the meeting with the Pope,” Badilla wrote. “Some Vatican sources believe that the meeting could be at the end of the first week of July.”

But a Spanish website is saying they have received confirmation from their Vatican sources (they do not name them) that the meeting will be on July 5 (see below for the full article; link)

It will be the third meeting between Pope Francis and Vladimir Putin. The first was November 25, 2013 and the second on June 10, 2015.

The Vatican and the post-Soviet Russian Federation established full diplomatic relations in 2009, after resuming bilateral relations in 1990.

In 2011, Russian President Dmitri Medvedev was received in the Vatican by Benedict XVI, who in 2007 had also received Vladimir Putin, then President.

The central issue at the meeting, it is believed, will be the situation in Ukraine.

In Ukraine, there has been since 2015 a simmering war in the eastern part of the country, leading to several thousand deaths and tens of thousands of displaced people.

Also in Ukraine, the local Orthodox Church was granted autonomy (autocephaly) six months ago by the Ecumenical Patriarch of Constantinople, Bartholomew, but this decision, though praised by many in the West, was characterized by the Russian Orthodox Church as “uncanonical” and so invalid. This has led to a division at the heart of the Orthodox world between the Church with the greatest authority and prestige, the Greek Orthodox Ecumenical Patriarchate of Constantinople, and the Church with the largest number of members and arguably therefore of very great importance in the Orthodox world, the Russian Orthodox Church centered in the Patriarchate of Moscow.

Another central issue will be the situation in the Middle East, where the presence of Christians has been reduced greatly in recent years due to conflict and emigration.

It is thought that a papal trip to Russia may also be discussed.

Here is a Spanish language news report on the matter, which supplies the date of July 5 for the meeting. (link)

Francis will receive Putin in July, with the Ukrainian crisis at the center of the agenda

Pope Francis will receive Russian President Vladimir Putin in the first week of July, confirmed Vatican sources to Telam, in a meeting that will be marked by the tension

Pope Francis will receive Russian President Vladimir Putin in the first week of July, confirmed Vatican sources to Telam, in a meeting that will be marked by tensions in the Church and Ukrainian politics, and the situation in the Middle East.

The pontiff will receive Putin on July 5, for the third time since his enthronement in 2013, in the midst of a meeting already planned by the Holy See to discuss the situation in Ukraine.

In addition to the tensions within the Church for the request of the Ukrainian Greek Catholics to separate themselves from the Moscow Patriarchate [Note to readers: this is an error in the Spanish report; it was not the Ukrainian Greek Catholics who were connected with Moscow, or or who requested a “separation,” but some Ukrainian Russian Orthodox, supported strongly by the Ukrainian government, who appealed to Constantinople to be granted “autocephaly” instead of remaining under the Moscow Patriarchate; so it was a matter within Orthodoxy, and had nothing to do with the Ukrainian Greek Catholics, who are united with Rome; the author, however, seems to be saying this in the next phrase) and the possibility of a “schism” in the Orthodox world, the meeting of Francisco and Putin will have the geopolitical situation in the center in the region.

Considering “the delicate and complex situation in which Ukraine finds itself” Francis invited to the Vatican the Major Archbishop of the Ukrainian Greek-Catholic Church, Sviatoslav Shevchuk, and the members of the Church’s Permanent Synod and its metropolitans for a working meeting on the 5th and 6th of July.

As a framework for this July meeting, tensions between Ukraine and Russia reached a new peak in early May, when Putin decreed the simplification of the granting of citizenship to certain categories of Ukrainians and to residents in the pro-Russian Donbas separatist areas, a measure that was rejected forcefully by the United States and the European Union. (…)

Last year, a collection launched by the Vatican in 2016 to help the victims of “the drama of the consequences of violence in Ukraine” gathered 16 million euros, the Holy See reported.

These funds are being used in Ukraine. We and several members of our Urbi et Orbi Foundation will be making a visit to Russia, Belarus, Ukraine, Hungary and then Rome in mid-July, in part to observe the work being done with these funds. (If you would like to join us on this trip, please write to me by return email. The trip is from July 11 to 26.)