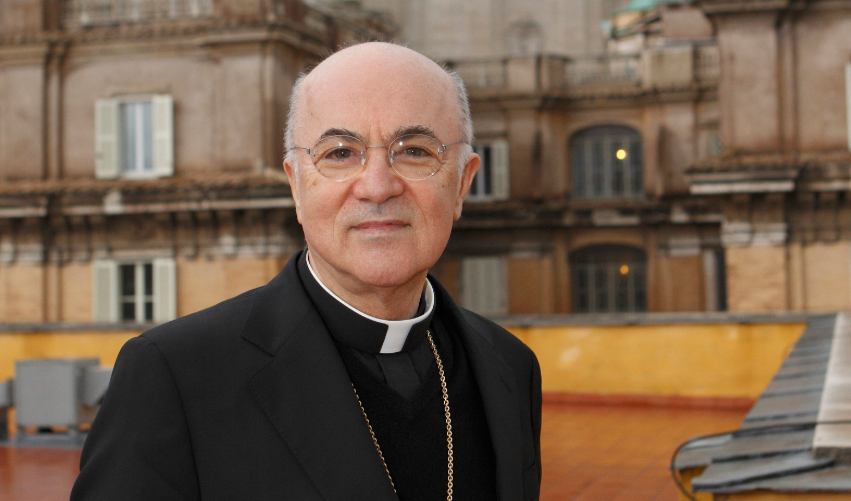 Archbishop Carlo Maria Viganò (above) issued his “Testimony” on the sexual abuse scandal in the Church, and the scandalous role of the Church hierarchy in minimizing or covering up the abuse, on August 25, 2018 — about nine and a half months ago.

That text dramatically included a call for Pope Francis to resign because, as Viganò recalled it, Viganò had personally told Pope Francis about the abuse committed by then-Cardinal Theodore McCarrick during a June 23, 2013 meeting in the Vatican, yet Francis did not act on that information in any way, and, indeed, actually lifted certain “restrictions” placed on the activity of then-Cardinal McCarrick by Pope Benedict XVI.

From that very moment, Pope Francis said he would make no comment on the allegations.

However, on May 28, Francis did make his first comment on the allegations.

And that comment was to deny that he knew anything about McCarrick and the allegations that he had abused seminarians.

The comments came in an interview granted recently to a highly respected Mexican journalist Valentina Alazraki. (Here is a link to full New York Times report on the interview, entitled “Pope Francis Denies He Knew of Abuse by McCarrick”: link)

Here is what Francis told Alazraki in Italian on the Vatican’s official news website (so these are accurate quotations, link):

“About McCarrick I knew nothing. Obviously, nothing, nothing. I said it many times, I knew nothing, I had no idea. And when he [Viganò] says that he spoke to me that day, that he came… and I do not recall if he spoke about this, if it is true or not. I have no idea! You know that I, about McCarrick, I did not know anything, otherwise I would not have remained silent.”

The Pope also suggested that Viganò was not a reliable witness because he had been embroiled in an Italian court battle with his brother over funds the brothers had used to support a charitable effort in Africa.

Viganò then, from his place of hiding — he has not appeared in public since August 2018 — responded.

He insisted that he had told the Pope about the actions of McCarrick on June 23, 2013. (Here is a link to a May 28 Lifesitenews report on Vigano’s”>Vigano’s reaction, link).

Therefore, he maintained, “What the Pope said about not knowing anything is a lie. He pretends not to remember what I told him about McCarrick, and he pretends that it wasn’t him who asked me about McCarrick in the first place.”

Also, in comments to Lifesitenews, Viganò dismissed the Pope’s attempt to cast doubt on his reliability because of the court dispute with his brother concerning the management of their inheritance — a question he pointed out had “no relevance to the allegations regarding Cardinal McCarrick.”

“What Pope Francis said regarding the Milan ruling and my family has nothing to do with anything, because it has been completely clarified. It was only a division of property between brothers. I accepted it to make peace. Neither me nor my brother appealed the ruling, so the story ended there. And it has nothing to do with McCarrick. It is one of the many stories that they [the Vatican and the circle of Francis’ advisors] raised to destroy my credibility.”

So the situation was left there: a May 28 denial by the Pope that he had any memory of Viganò alerting him to the abuse committed by McCarrick, and a May 28 reply by Viganò that that denial was not credible.

Today comes the publication in the Washington Post of a new, more extensive interview with Vigano (the interview was not in person or in a live phone call, but in written responses to emailed questions).

Special Note to Readers: I plan to continue to follow this story in the months ahead. I know Archbishop Viganò personally and will make an effort to report on these matters in an comprehensive and balanced way. I would like to ask some of the readers of these letters — which will remain free — to consider joining me in this effort, perhaps, by sponsoring this work (here is a link to the donation page: link.) Even quite small monthly donations (for example, $2.50 per month, more or less the price of one cup of coffee) would be very much appreciated, and help cover the costs of travel and filing reports. —RM

Archbishop Viganò speaks up: June 10 Washington Post interview, entitled: “This archbishop called on the pope to resign. Now he’s in an undisclosed location.”

Here below are excerpts from the article published by the Washington Post:

ROME — In the instant he became one of the most controversial figures in modern Catholic Church history, Archbishop Carlo Maria Viganòwent dark.

The retired Vatican ambassador to Washington wrote a bombshell letter last summer calling on Pope Francis to resign on the grounds that he had tolerated a known sexual abuser. As that letter was published, Viganò turned off his phone, told friends he was disappearing, and let the church sort through the fallout.

Nine months later, in his first extended interview since that moment, Viganò refused to disclose his location or say much about his self-imposed exile. But his comments indicate that, even in hiding, he is maintaining his role as the fiercest critic of the Francis era, acting either as an honorable rebel or, as his critics see it, as an ideological warrior attacking a pope he doesn’t like.

The Vatican has had little official response to Viganò. A communications official declined to comment for this story. But Francis last month responded for the first time to Viganò’s summer letter. The pope said he knew “nothing, obviously nothing” about the misconduct of former cardinal Theodore McCarrick and could not remember if he had been personally warned about McCarrick by Viganò in 2013. Viganò claimed to have told Francis that McCarrick had “corrupted generations of seminarians and priests.”

“How could anybody, especially a pope, forget this?” Viganò wrote to The Post.

Viganò wrote that he has become “more careful about whom I meet and what I say.” He said questions about him were “irrelevant to the serious problems facing the Church.”

“My life is quite normal, thank you for asking,” he wrote.

Viganò wrote “n/a” in response to questions about where he was living, whether he believes his safety is under threat, and how his actions last August have otherwise altered his life.

Viganò wrote that he has not been contacted by the Catholic Church since his accusations were initially published by several conservative church news outlets. He described himself as an “old man” who “will be appearing in front of the Good Judge before too long.”

“My silence would make me complicit with the abusers, and lead to yet more victims,” he said.

Viganò wrote last year that both Benedict XVI and Francis had known about McCarrick’s misconduct. But he portrayed Benedict as attempting to take quiet disciplinary action against the then-cardinal and Francis as patently ignoring those sanctions.

Last month, private letters disclosed by a former McCarrick aide supported Viganò’s claim that McCarrick was told by the Vatican to retreat from public life during Benedict’s papacy. But it is also clear that McCarrick swiftly ignored his orders from Rome, even while Benedict remained pope. No documents have surfaced showing whether Francis knew of the sanctions against McCarrick by the time he became pope in 2013.

Viganò said the “truth will eventually come out” for Francis, as it had for Cardinal Donald Wuerl, the former archbishop of Washington who portrayed himself last summer as being unaware about complaints against McCarrick — a claim that documents subsequently proved false. Viganò suggested to The Post that Francis is covering up other cases, “as he did for McCarrick.”

Viganò, in his responses to The Post, made it clear he is watching even smaller moments inside the Vatican. He cited an exchange from a Vatican press conference in February in which a journalist asked Archbishop Charles Scicluna, a church abuse czar, about a case in Argentina. Scicluna began to answer, and the Vatican spokesman cut in, saying the press conference — held during a landmark abuse summit — was not a time to “focus on individual cases.” Results of an investigation into the case would later be released, the spokesman assured.

“One may be forgiven for wondering whether the results of an honest and thorough investigation really will be released, and in a timely fashion,” Viganò wrote. “There is a certain irony here: This exchange happened while [the summit organizers] were discussing what they themselves called transparency.”

“The results of an honest investigation would be disastrous for the current papacy,” Viganò wrote to The Post. He also acknowledged that such an investigation may harm the reputations of more traditionalist pontiffs, Benedict and John Paul II, who presided over McCarrick’s rise.

“But that is not a good reason for not seeking the truth,” Viganò said. “Benedict XVI and John Paul II are human beings, and may well have made mistakes. If they did, we want to know about them. Why should they remain hidden? We can all learn from our mistakes.”

Viganò did not respond directly to a question about whether he has documents to back up his claims.

“The time has not yet come for me to release anything,” Viganò said, instead calling on the pope and other Vatican officials to release documentation, “assuming they have not yet destroyed it.”

Viganò also spoke in detail about one of his most contentious beliefs: that the sexual abuse crisis would be “far less severe” if the “problem of homosexuality in the priesthood were honestly acknowledged and properly addressed.”

“Given the overwhelming evidence, it is mind-boggling that the word ‘homosexuality’ has not appeared once, in any of the recent official documents of the Holy See” on events dealing with abuse and youth, Viganò wrote.

He said a “gay mafia” among bishops, intent on protecting themselves, was “sabotaging all efforts at reform.”

Viganò referenced only two regrets about his letter last summer. He said he wished he had spoken out sooner. He also said, “in retrospect,” he would have softened the call for Pope Francis to resign — a demand even Viganò’s supporters said was far-fetched and distracting.

Viganò now leaves open the possibility that Francis could repent, and says the pope should step down “if he refuses to admit his mistakes and ask for forgiveness.”