Letter #29: Will the bishop be expelled

Letter #29: Will the bishop be expelled

A report is circulating that the controversial traditional Catholic bishop, Richard Williamson, may soon be expelled from the Society of St. Pius X

Perhaps the most important bit of “news” in the long and interesting, and important, interview below, is at the very end. I’ll copy that final paragraph and put it right here up top: 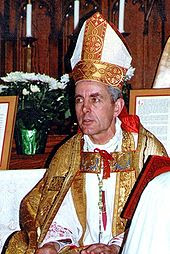 This paragraph was published yesterday on the web site Rorate Coeli, which concentrates on traditional Catholic issues and events and is a useful website for these issues. (Link: http://rorate-caeli.blogspot.com/2012/10/sspx-rome-we-are-back-to-square-one.html) “Rorate coeli” is the Latin of Isaiah 45:8, meaning “Drop down dew, heavens,” expressing the longing of those in a desert land for moisture, and by analogy, the longings of Israel, and of the Church, for spiritual water, for the truly just man — the Messiah. Here is the complete passage from Isaiah:

R. Aperiatur terra et germinet salvatorem.
(Let the earth be opened and send forth a Savior).

Whether Williamson is expelled from the Society, or not, there is clearly some tension within the Society of St. Pius X.

The Society has, since 1988, been led by four bishops, of whom Williamson is one, ordained by French Archbishop Marcel Lefebvre in June of that year.

Williamson, 72, a convert from Anglicanism, joined the movement of Archbishop Marcel Lefebvre in the 1970s at the time of his conversion to Catholicism. Always outspoken, he became especially controversial in January 2009, when Pope Benedict lifted his 1988 excommunication.

A Swedish television station, at the very time as the excommunication was being lifted aired a November 2008 interview with Williamson in which he said, citing the “Leuchter report,” that he doubted the existence of gas chambers at Auschwitz and doubted that 6 million Jews had lost their lives under the National Socialist persecution of European Jewry during World War II, expressing his opinion that the number of Jews killed was far less. (So the interview was held for more than two months before being aired, and was aired only after the Pope’s decision to lift Williamson’s excommunication; this led some to suggest that the Swedish station had in some way “orchestrated” the interview and its airing in order to cast a shadow not simply on Williamson, but on Pope Benedict himself.)

Williamson’s exact words were: “I believe that the historical evidence is strongly against, is hugely against, six million Jews having been deliberately gassed in gas chambers as a deliberate policy of Adolf Hitler” and “I think that 200,000 to 300,000 Jews perished in Nazi concentration camps, but none of them in gas chambers.”

The Vatican then declared that “in order to be admitted to episcopal functions within the Church, (Williamson) will have to take his distance, in an absolutely unequivocal and public fashion, from his position on the Shoah, which the Holy Father was not aware of when the excommunication was lifted.”

In 2010, Williamson was convicted of incitement by a German court and fined €10,000, but this conviction was overruled by the German appeals court on February 22 this year, after it was found that the initial charges had failed to specify how and why Williamson had broken the law.

But it is not only Williamson’s views on the Holocaust that are controversial. He has called Jews the “enemies of Christ,” claimed that Jews and Freemasons have contributed to the “changes and corruption” in the Catholic Church and stated that Jews aim at world dominion.

Despite these views, it is Williams actions within the society that seem to have caused the tensions which may lead to his ouster.

He made an unauthorized visit at the end of August this year, two months ago, to administer the Sacrament of Confirmation to about 100 lay people at the Benedictine Monastery of the Holy Cross in Nova Friburgo, Brazil, in the state of Rio de Janeiro.

The Society of St. Piius X’s South American district superior, Father Christian Bouchacourt, posted an official letter of complaint on the Society’s website, and then a German Catholic website, Kreuz.net, stated that because of this and Bishop Williamson’s refusal to stop publishing his weekly e-mail, Bishop Bernard Fellay, the Society’s Superior, would expel him.

Bouchacourt said the Williamson’s Brazil visit was “a serious act against the virtue of obedience” that did not respect the Society’s procedures. The September 6 letter said the visit was “also an attack upon the most elementary demands of courtesy.”

However, the Rorate coeli note about Williamson’s possible imminent expulsion from the Society is only a small note at the end of a very long, interesting interview with a leader of the Society in Germany.

And this interview is worth reading for all who would like to get a sense of the mind of the Society following the apparent collapse this spring and summer of talks between the Society and Rome to end the Society’s curent state of irregularity.

Therefore, after the note below on pilgrimages and subscribing to the magazine, we post the entire text of this interview.