“With a troubled heart I am following what is happening in Kiev. I assure the Ukrainian people of my closeness and I pray for the victims of the violence, for their families and for the injured. I call on all sides to stop every violent action and seek agreement and peace.” —Pope Francis, during his Wednesday General Audience in St. Peter’s Square today

“Those holding power bear full responsibility for what is happening in our country.” —Ukrainian Byzantine-rite Catholic Archbishop Sviatoslav Shevchuk, major archbishop of the Ukrainian Catholic Church (and close friend of Pope Francis), in Kiev today

“Kiev was so beautiful. We were invited to sing with the old babushkas in church. Afterwards, they lifted their hands toward us as if in blessing, and sang a hymn we did not understand. They gave us two icons, of Mary and Jesus, as gifts.” —My son, Christopher, speaking to Pope Francis in the Domus Santa Marta this summer, after visiting Kiev toward the end of a long journey on the Trans-Siberian railroad across Russia from east to west, ending in Rome

My sons visited Ukraine this past summer, taking the Trans-Siberian railroad across Russia from China, through Mongolia, and through most of Siberia to Kazan and Moscow, then south to Kiev.

Kiev was the city they liked best of all those they visited. Kiev, that multi-hilled city of golden domes and ancient monasteries, of culture and learning.

There they met with Konstantin Sigov, one of the country’s leading Orthodox intellectuals. There they visited the village of Lyshnya, just outside Kiev, tasting a home-made liquor so potent it nearly burned their throats. There in a local Orthodox church, they sang with a group of mostly old women, stumbling over the old Slavonic (they speak only modern Russian).

So deeply were they affected by the hospitality that they experienced, the good food and the joyful simplicity of the people, that when they reached Rome, my older son told me he wanted to return to Kiev to live for a year, to study. And we began to makes plans for that.

Now Kiev is marked by flames, by blood in the streets. Twenty-five people have been killed, and the country seems to be sliding toward civil war.

This is not the place to attempt to set forth all the reasons for what is occurring.

But it seems clear that, with this outbreak of violence, with the talk now of the possible break-up of the country, with the declaration of President Obama that the Ukrainian government must not “cross a line” in dealing with the protesters, that some sort of geo-political, geo-cultural “end game” has begun in a country on the border of Russia, on the hinge between Europe and Asia, at the intersection between Eurasia and the Middle East.

It also is clear that what is happening is not just about Ukraine but also, and perhaps primarily, about Russia.

And since Russia is at the heart of the message of Fatima — “in the end, Russia shall be converted, and a period of peace shall be granted to the world,” as the Lady said to the three children in Portugal in 1917 — what is happening now in Kiev must also be seen in the context of the Fatima message: in the context of the future of the Christian faith in Russia and of a coming age of peace.

A German member of parliament, interviewed today, said that Ukraine is going to be absorbed into the European Union but that the real issue is whether Russia will follow this same process.

The question becomes: Will the revolution unfolding in Ukraine — a revolution some hope may also unfold in Russia — bring about a “post-Christian” culture in the former Soviet space, within a highly secularized European Union, and not a religious conversion?

Or might what is unfolding, with the presence of many religious leaders from both the Catholic and Orthodox sides, lead to an unprecedented religious conversion? 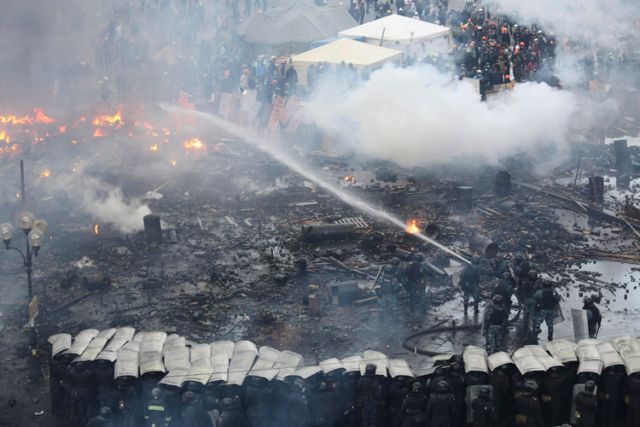 In this context, just an hour ago, I received as email containing an appeal from an old friend, Myroslav Marynovych, 65, the vice-rector of the Ukrainian Catholic University in Lviv, and a founder of Amnesty International Ukraine. He himself was a political prisoner in the Soviet time. (Photo below)

His grandfather was a priest of the Ukrainian Greek Catholic Church and his family was very religious. He attended the Lviv Polytechnical Institute, where he spoke out against the Soviet regime which did not uphold the ideals of Communism. In 1976, he became a founding member of the Ukrainian Helsinki Group, which led to his arrest on April 23, 1977, for “Anti-Soviet Agitation and Propaganda.” The trial and sentencing lasted 11 months, and he was convicted and sentenced to the maximum term: 7 years of hard labor and 5 years in exile.

In 1987, he returned to Ukraine, and worked in an oil refinery and as a journalist.

I met him a decade ago on a visit to Ukraine, and came to appreciate greatly his vision for his country and for entire post-Soviet territory.

In his email, entitled “What can Ukraine expect from the West now?” was the following text:

I write to you as a former prisoner of conscience of the Brezhnev era. All other titles are rapidly losing sense in the light of the bleeding Ukrainian Maidan [Note: Maidan Square is the central square of Kiev.]

All my life I admired Western civilization as the realm of values. Now I am close to rephrasing Byron’s words: “Frailty, thy name is Europe!” The strength of bitterness here is matched by the strength of our love for Europe.

If it still concerns anybody in decision-making circles, I may answer the question in the title.

First and foremost, stop “expressing deep concern.” All protestors on the Maidan have an allergy to this by now in these circumstances senseless phrase, while all gangsters in the Ukrainian governmental gang enjoy mocking the helplessness of the EU [Note: the European Union].

Take sanctions. Don’t waste time in searching for their Achilles’ heel: it is the money deposited in your banks. Execute your own laws and stop money laundering. The Europe we want to be part of can never degrade the absolute value of human lives in favor of an absolute importance of money.

Also cancel Western visas for all governmental gangsters and their families. It is a scandal that ordinary Ukrainians living their simple lives have to provide their ancestors’ family trees to obtain a visa while ruling criminals guilty of murder, “disappearances”, and fraud in the eyes of the whole world enjoy virtually free-entry status in Europe.

Do not listen to Yanukovych’s and Putin’s propagandistic sirens. Just put cotton in your ears. Be able to decode their lie; otherwise they will decode your ability to defend yourself.

Instead, listen to Ukrainian media sacrificing their journalists’ lives to get truthful information. Do not rely so much upon the information provided by your special correspondents in other countries who come to Ukraine for a day or two. Hire Ukrainians who live in this country to translate the Ukrainian cry of pain. Secure money for that right now instead of waiting for funds from next year’s budget.

Come to Ukrainian hospitals and talk to so-called “extremists” who want to “subvert the legitimately elected government,” those who have “cruelly beaten” policemen and “deliberately” blasted explosives to wound themselves. Yes, the face of war is cruel. But, arriving at the Maidan, these people repeated almost literally what King George VI said to his people on the 3 September 1939: “We have been forced into a conflict, for we are called… to meet the challenge of a principle which, if it were to prevail, would be fatal to any civilized order in the world.”

Let us conclude in solidarity with the King and the Ukrainian people: “The task will be hard. There may be dark days ahead, and war can no longer be confined to the battlefield, but we can only do the right as we see the right, and reverently commit our cause to God. If one and all we keep resolutely faithful to it, ready for whatever service or sacrifice it may demand, then with God’s help, we shall prevail.”

The Catholic University of Ukraine, based in Lviv in the west of the country, also issued a powerful statement today.

The line on our nation’s electrocardiogram has again peaked. The Maidan survived the internal forces’ assault yesterday, but suffered unspeakable losses. On TV the smoke rising from the numerous fires on the Maidan looks like smoke from censers at a massive national memorial service.

May the souls of the innocent victims rest in peace, where the righteous repose! Let the Lord accept them into the kingdom of heaven, let Him heal the numerous wounds with His merciful hand, let Him relieve the pain of the people who have once again been deceived by the authorities!

We unequivocally affirm that responsibility for the current escalation rests solely on the government – personally Viktor Yanukovych and his “hawkish” command. Every case of escalation, each more striking in its complete absurdity, slashes our hopes for a peaceful and wise solution to the crisis and brings us closer to a humanitarian catastrophe. Every case seems to check off the next item in the “crisis managers’” secret plan.

Conversely, every step toward overcoming social tensions, every manifestation of the people’s self-defense, every effort to be faithful to God’s commandments – all of this makes us co-authors in the positive program of the Lord’s Providence. The Ukrainian Catholic University is and will always be a supporter of this latter path and calls upon all people of good will to choose it. In the current difficult conditions, where those in power undermine the very institution of government, we aim to be an island of peace and reliable support to all those who defend the national interests of Ukraine.

We declare our unwavering loyalty to Mayor of Lviv, Mr. Andriy Sadovy and the legitimately elected bodies in Lviv and the region, who are trusted and protect the interests of the people. We are willing to cooperate with them to ensure the rule of law and civil rights. At a time when the whole executive branch is wobbling, the Ukrainian Catholic University announces a mode of self-management and self-discipline.

This decision embodies our belief that at this critical time for the state, universities have to demonstrate their ability not only to function effectively without guidance from above, but also to become a mainstay in the formation of a new framework for education and social life in general.

The leadership and all faculty of UCU are in solidarity with the strike declared today by the students and support its demands. We live in one community and share the same values.

May the merciful Lord fill us all with hope and courage to sacrificially serve Ukraine during these difficult trials!

“You live in a deranged age, more deranged that usual, because, in spite of great scientific and technological advances, man has not the faintest idea of who he is or what he is doing.” —Walker Percy (1916-1990), American Catholic convert and writer, author of The Message in the Bottle and Lost in the Cosmos