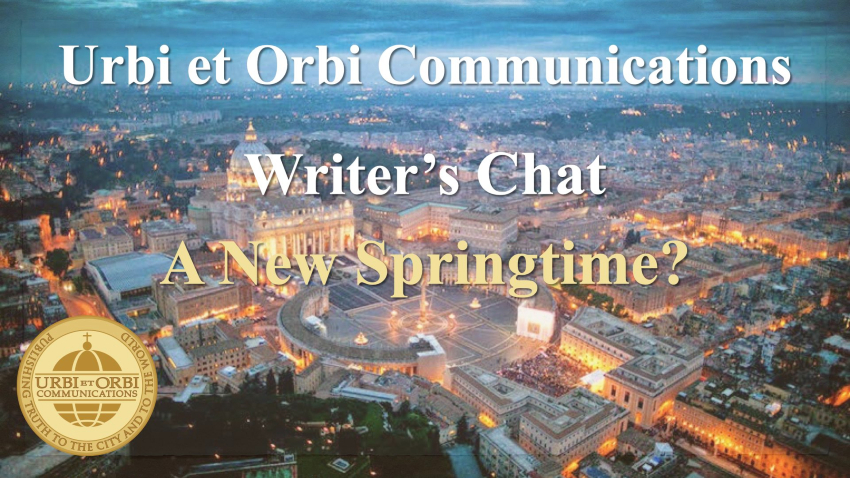 Today I wanted to send you a link to Part #2 of a 3-part video containing a “writer’s chat” involving myself, my assistant editor Christina Deardurff, and Dr. Peter Kwasniewski, discussing the present situation of the Catholic liturgy.

American scholar Dr. Peter Kwasniewski is a very learned man, an expert on the history of the liturgy, and also a man of quiet wisdom and humility.

I think many of you might like to click on the video and see what Dr. Kwasniewski has to say, even just for a few moments…

We also attach below some excerpts from Dr. Kwasniewski’s new book From Benedict’s Peace to Francis’s War. (Note: These excerpts from the book are published below, after the video link, and after the picture of Dr. Kwasniweski and of the priest celebrating Mass.)

These excerpts were published in our last issue of Inside the Vatican magazine.

We encourage you to consider subscribing to the magazine which brings new, original, thoughtful content to your door. We do appreciate every single subscriber. —RM

P.S. Save the date: Join us on Friday, February 18 at 1:00 p.m.Eastern for our next ITV Writer’s Chat with Dr. Gavin Ashenden. Click below to register and join us. 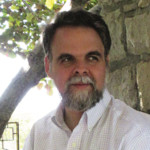 Author, educator, musician and liturgy scholar Peter Kwasniewski, an American, is not one to pull punches. Nor does From Benedict’s Peace to Francis’s War, his new book of essays reacting to Pope Francis’s 2021 motu proprio Traditionis Custodes. 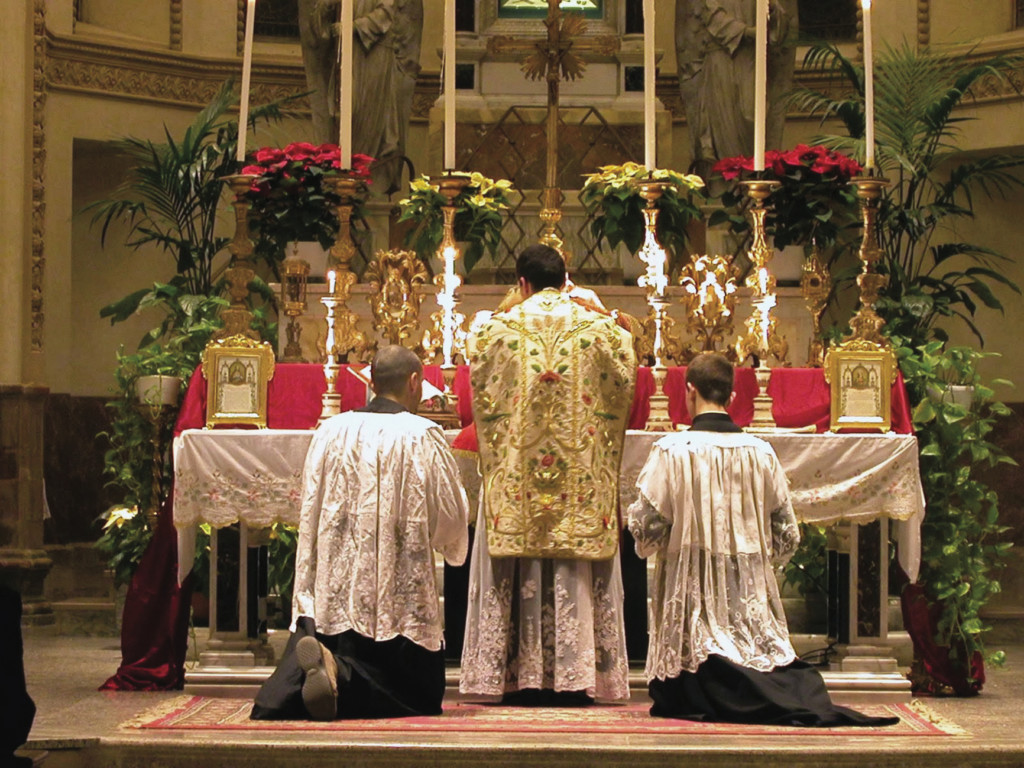 Here follow excerpts from Dr. Kwasniewski’s book, which contains essays from many different scholars and writers:

“The crudest form of clericalism”

So too, the pope and bishops are mandated to guard and pass on the tradition that has been handed down to them (2 Thess. 2:15), and are not to repudiate or abrogate it, or concoct their own novel version.

Of this tradition, the bishops (including the pope) are the guardians and servants.

They can never be the creators nor the owners of the Church’s doctrine, practice or liturgical life, but are charged with protecting and promulgating the common religious inheritance of the whole faithful.

For popes and bishops to behave as if the Church’s tradition is their belonging, with which they may do as they please, with the rest of the faithful just having to accept it, marks the crudest form of clericalism.

“Whoever obeys in these conditions disobeys God”

Obedience — and this is an error that finds its deepest roots even in the pre-conciliar Church, it must be said — is not an end. It is a means of sanctification.

Therefore, it is not an absolute value, but rather an instrumental one. It is a positive value, very positive, if it is ordered towards God.

But if one obeys Satan, or his servants, or error, or apostasy, then obedience is no longer a good, but rather a deliberate participation in evil.

Exactly like peace. Peace — the divinity of today’s subversion — is not an end, but rather an instrument of the good and the just, if it is aimed at creating a good and just society. If it is ordered towards creating or favoring a society that is Satanic, malignant, erroneous, and subversive, then “peace” becomes the instrument of hell.

Exactly! Therefore, whoever obeys men while being aware of facilitating evil and obstructing the Good, whoever they may be — including the ecclesiastical hierarchy, including the pope — in reality becomes an accomplice of evil, of lies, and of error.

Whoever obeys in these conditions disobeys God. “Because no slave is greater than his master” (Mt 10:24)… [T]he first concern ought to be to always follow and defend the Truth, not the cloying, obsequious, and scrupulous groveling which is the spoiled fruit of a misunderstood Tridentinism.

—Massimo Viglione, “They Will Throw You Out of the Synagogues”

For a religion predicated on tradition, the suppression of tradition makes no sense unless the goal is to change that religion fundamentally.

By “unity,” the pope means universal acceptance of that project.

He is demanding that all Catholics view uncritically changes that have obviously weakened the faith.

If they don’t, they are “divisive.”

The pope, of course, embodies the very division that he claims to deplore.

He is dividing Catholics at the deepest possible level — from Catholic tradition itself.

A “unity” rooted in heterodoxy is a sham.

As the modernist Church stumbles from scandal to scandal, he dares to hold it up as the model of Catholicism to which all must aspire.

His latest act of ecclesiastical tyranny is nothing more than an attempt to extract from the most faithful Catholics a pledge of allegiance to that crumbling Church.

The spectacle of a pope disloyal to Catholic tradition issuing loyalty litmus tests is an outrageous one.

By disregarding the authority of past popes, Francis erases his own.

He is not solving crises but creating them so that his modernist revolution can be fulfilled.

In the past, orthodox Catholics defended the pope from enemies of the faith.

Now they must defend the faith from a pope who has shown himself repeatedly to be their enemy.

“Tradition stands above the Pope”

But Benedict’s motu proprio Summorum Pontificum reasons on a totally different level. Pope Benedict did not “allow” the “old Mass,” and he granted no privilege to celebrate it.

In a word, he did not take a disciplinary measure that a successor can retract.

What was new and surprising about Summorum Pontificum was that it declares that the celebration of the old Mass does not need any permission.

It had never been forbidden because it never could be forbidden.

One could conclude that here we find a fixed, insuperable limit to the authority of a pope.

Tradition stands above the pope.

The old Mass, rooted deep in the first Christian millennium, is as a matter of principle beyond the pope’s authority to prohibit.

Many provisions of Pope Benedict’s motu proprio can be set aside or modified, but this magisterial decision cannot be so easily done away with.

Pope Francis does not attempt to do so — he ignores it.

`It still stands after July 16, 2021, recognizing the authority of tradition that every priest has the moral right to celebrate the never forbidden old rite. 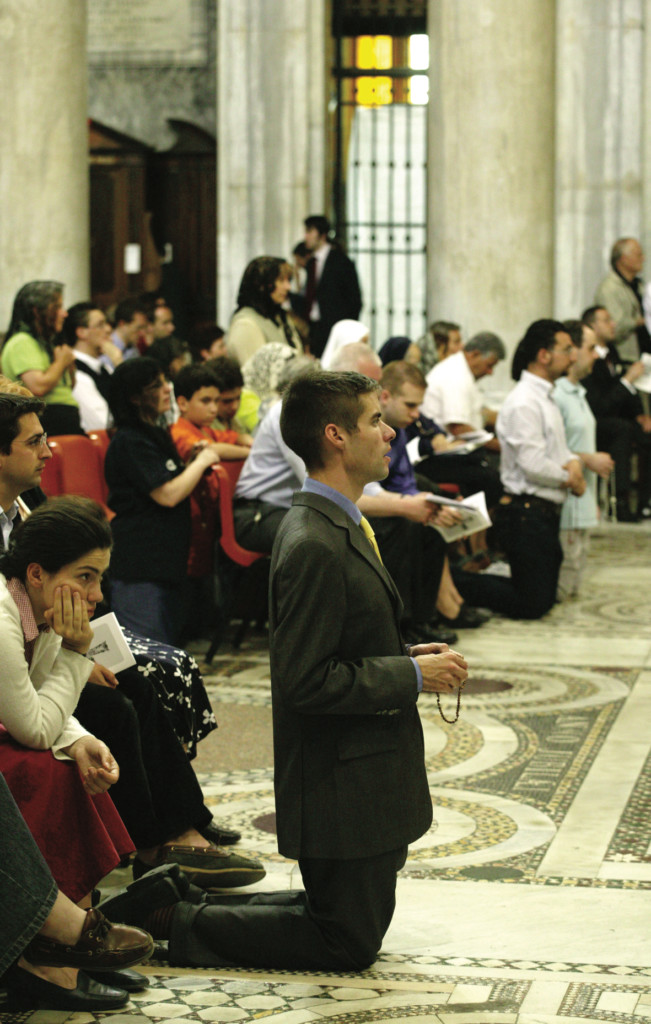 The ancient Mass is not theologically inert.

It exerts a centripetal force on the Catholics attending it, drawing them back to the center of orthodoxy.

Catholics attending it reveal to researchers that they accept the hard teachings, on divorce and sexuality, as well as on the Real Presence, to far greater extent than do those who attend the reformed Mass.

Those attached to the Old Mass often experience this, in themselves and in others.

This Mass has the power to draw in nonbelievers and the lapsed, as well as to inspire the fervent.

In a time when the moral authority of the Church is at a low ebb, and people will not accept the truth of things just because the Pope or Bishops say so, it is a valuable spiritual means of drawing people into the truths entrusted to the Church by Christ….

The movement for the Traditional Mass will bounce back    .

Things will not be the same again, however, because after such a series of policy reversals papal prestige will be seriously weakened.

In the future, the fate of the New and Old Masses will not be determined by the fancies of the reigning Pope, but on the basis of their pastoral and theological merits, worked out in practice, locally.

This may be a bit chaotic, but the ancient Mass will be able to reach more and more people…. We will see its power to draw people in, not to a private experience which they happen to prefer, but to the center of the Church’s spirituality and teaching.

—Joseph Shaw, “Is the Missal of Paul VI the Unum Necessarium (“The one thing needful”)?”