Today started with a bit of sun, then turned rainier toward mid-afternoon. There was even a bit of lightning, and thunder, but nothing like the lightning which struck St. Peter’s Dome one month ago. In the evening, it was cool and drizzly. 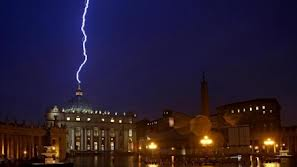 It was on February 11 that Pope Benedict announced his renunciation of the papal office — exactly one month ago.

(Left, a photo of the lightning bolt that struck St. Peter’s dome on February 11 at about 6 p.m., about 6 hours and 20 minutes after Benedict announced he would step down from the papal throne)

The time to the opening of the Conclave to elect his successor is now less than 40 hours, just a day and a half…

Most observers now are focused on who will become the next Pope. If I were asked right now who I think the next Pope will be, I would say I simply do not know.

What does seem clear is that there is occurring a very silent, hidden battle to determine how closely the next pontificate follows the line of Ratzinger — the line of transparency — or how much it draws back from that line. That is what is being determined right now.

Today the cardinals spent the morning separately, celebrating Mass in their titular Roman churches. Each gave a homily, and these can be found on the internet.

Yet there still remains time to try to understand more fully the context of this election: Benedict’s unexpected decision to resign; the “lobbies” that exist, or do not exist, in the Roman Curia; the prelates who resisted Pope Benedict and his efforts to bring transparency and to “cleanse” the Church, and those who stood by him.

A few nights ago, I had a conversation with don Ariel S. Levi di Gualdo, a 49-year-old Italian priest, born in Tuscany, who was ordained in Rome after a mid-life conversion at the age of 43. Don Ariel describes himself as “a student of Father Peter Gumpel, S.J.” (the postulator of the cause of Pope Pius XII), and he is the author of a book entitled E Satana si fece trino (“And Satan Made Himself Triune,” 2011). 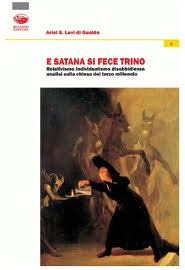 His book is an indictment of what he sees as the three great ills undermining the Church in the 21st century: “relativism, individualism, disobedience.”

His book also makes the claim that there is a widespread network of homosexual priests in the Church. He argues that the cases of pedophilia have involved a very small number of priests, but that the cases of “psychological homosexuality” involve a much larger number. Here is a link to a review of the book, in Italian: http://fidesetforma.blogspot.it/2013/01/e-satana-si-fece-trino-dal-concilio.html 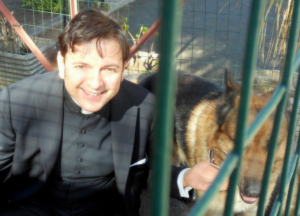 However, there are no names in the book at all. No attributed citations. And the specific cases which don Ariel lists to bolster his claim — for example, a priest who lives in his rectory with a male Brazilian friend — are simply asserted, never given a time or a place, never made precise. So there is no checkable evidence in this book whatsoever to substantiate the existence of such a network.

I had been told that his book was the remote source of the article by Ignazio Ingrao in Panorama four weeks ago which spoke of a “gay lobby” in the Roman Curia, and which claimed that the secret report of the three cardinals, given to the Pope on December 17, contained information about this “lobby.” That claim was picked up in a La Repubblica article which suggested — without evidence — that Pope Benedict was stunned by what he learned from reading that report, and that what he learned contributed to his decision to resign.

What did don Ariel have to say about all this?

Well, he told me that he had, in fact, delivered a copy of his book to Ingrao about a week before Ingrao wrote his article.

He also told me that last fall, he sent copies of his book to a number of members of the Roman Curia, including Cardinal Julian Herranz, the head of the committee of three cardinals that investigated the “Vatileaks” affair, Cardinal Jozef Tomko and Cardinal Salvatore De Giorgi, the other two cardinals on that investigating committee.

He also told me that Herranz’s secretary had responded to the gift, thanking don Ariel for the book.

When I asked his for evidence of that response, he showed me a copy of the thank you note he received. I have a photograph of it.

He also showed me copies of a number of other thank you notes he received from other Curial officials to whom he had given the book.

He also told me that he had had a face-to-face meeting in October with Cardinal Jean-Louis Tauran — the French cardinal who will announce the name of the new Pope once he is elected.

“Well,” I said, “you make some disturbing claims in your book, but in the end, where is your evidence?”

“I did prevalently an inquiry of a psychological type, based on my own experience here in Italy, and on conversations with many other priests and seminarians,” don Ariel said.

“But no one reading your book could gain any real insight into the actual membership and activity of these ‘lobbies’ that you claim exist, how important they are, what they do precisely,” I said.

“Rather than give names and statistics, I did a study of a method of operating,” don Ariel replied. “That is the more important point for me. I have experience in seminary where seven or eight out of 10 seminarians were gay, and the last two were kicked out for being too ‘orthodox’ and ‘normal.’ This is repeated in many seminaries. Those who advance are homosexuals. It is a sexual freemasonry, and it extends into the Vatican itself.

“If I say, along with Joseph Ratzinger in his famous meditations on Good Friday in 2005, that there is filth in the Church, and there is filth, I do not think I am lacking in charity,” don Ariel continued. “I think I am being charitable. I believe that charity passes by means of truth and justice.

“We must not forget that when Jesus picked up the whip in the Temple, he did so as an act of the highest charity. Not to see, not to cleanse, to sweep under the carpet, is not an act of charity.

“Already two years ago, when I wrote my book, I saw that we were at war. On one side, a very powerful evil. On the other, a very weak good.

“We need a warrior Pope, a Pope of tremendous energy and courage. Pope Benedict was a man of great orthodoxy, of great teaching, and we are all grateful to him. But for his whole life, he was a man of study. One does not become a man of government suddenly at the age of 78.

“Benedict has now grown old, and he realized that he could not carry out the needed cleansing,” don Ariel continued. “I fear the cardinals will choose a compromise figure. We do not need a compromise figure, but a strong, charismatic figure who will handle the situation.

“The priority, whoever is elected, must be a reform of the Roman Curia. For the past 40 years, it has become ever more autonomous from the Supreme Pontiff.”

I could not get any more detailed information from don Ariel. I paid the bill for our meal, and we parted.

This evening I went to the Santo Spirito in Sassia church, not far from the Vatican. The Church was dedicated in 1995 by Pope John Paul to the promotion of devotion to the Divine Mercy according to the insights of St. Faustina Kowalska.

The sermon was about the Prodigal Son, the Gospel for today. It was an eloquent sermon, preached by a Polish priest, don Giuseppe.

The tale of the Prodigal Son, who leaves his home and his family, spends his inheritance in wild living, only to end in misery, then decides to return home, where he is greeted by his father who embraces him because “my son who was lost is found,” applies to all of us, don Giuseppe said.

All of us must turn and return.

After the Mass, the crowd filed out of the church. I chatted for a moment with a priest from India, and just in that amount of time, a woman came out of the Church whom I had not seen in a long time. She is an expert in Vatican affairs, someone I trust.

“Yes.” There was a slight drizzle. The air was thick with humidity, and cool.

“I’ve been disoriented since February 11,” I said.

“I simply don’t know what to believe,” I said. “Did Benedict leave because of old age alone, or was he in some way forced out? And who can replace him?”

“Your question is too black and white,” she said. “You’ve left out the nuances. Benedict took the time to assess the situation. He formed the commission of the three cardinals, and they took their time, and presented their report.

“In the meantime, Benedict’s health was declining. I saw him recently, and he reminded me of how my mother, who was 90, looked about two weeks before she died.

“Last fall, he had two small strokes. These did not incapacitate him, but they worried him. He feared he might experience a more serious stroke.

“So Benedict did what he does best: he went to prayer. And in deep prayer, he struggled to understand what the Lord was calling him to do, knowing also all of the problems that still remained for him to deal with. And eventually he came to clarity: his sight was going, his hearing was going, his memory was going, he was not sleeping at night, and he realized he could not give the service to the Church that the Church desperately needed.

“Rather than continue to decline, he made the decision to step aside and allow a younger and stronger man, chosen with the help of the Holy Spirit, and not by his own decision, to take up the work that needs to be done.”

“And these stories of a ‘gay lobby’ in the Curia?” I asked.

“Look,” she said. “It’s not just one. There are several groups. And it’s not simply about being gay. The concern is that these groups are in competition with one other. There are careers at stake. Promotions. In this environment, all types of information, including information about a person’s sexuality — even rumors or lies about a person’s sexuality — can be employed to introduce doubt about a person, or to gain an advantage. Careers can be blocked. Alliances can be formed to consolidate power. Agendas can be sabotaged — even the agenda of the Pope himself.”

“But the Pope entrusted the management of the Curia to someone he trusted, Cardinal Bertone,” I said. “How did it all go wrong?”

“That’s a long story,” she said. “Are you going to have supper? Why don’t you come over to the house for dinner? That will give us more time to talk.”

“Thanks,” I said. “Sounds wonderful.”

“It won’t be anything special,” she said. “Just some leftovers.”