The “New Evangelization” and the Media

Yesterday in Assisi, Pope Benedict convened his inter-religious gathering for peace, and today in Rome the members of the various delegations were invited inside the Vatican for a farewell mid-day meal in the Paul VI Audience Hall.

I met briefly this morning with Archbishop Claudio Maria Celli, the head of the Vatican’s office for Social Communications, a thoughtful Italian prelate with a heart for the Church of the poor in Latin America and Africa, and his assistant, Monsignor Paul Tighe, a gracious, learned Irishman with an enviable brogue who is increasingly “the Vatican’s new media guy” as Tighe understands well the global media revolution brought by the internet.

In essence, we discussed the relationship of the media to the Church’s mission.

What is that mission?

Clearly, to communicating the faith. To communicate it, to share it, to pass it on…

But what faith, precisely?

No, none of these.

Rather, faith in Jesus.

Faith in the incarnate Logos, who is the meaning and orientation of all history, of all space and time, of all reality, past, present and to come, and even of that realm which was before time and will be after time, which we call eternity.

Faith in Jesus of Nazareth, the Jewish carpenter who lived in a certain time and place, who was executed under a banner that said he was a king, but who is not a power-mad king, a dictator who dominates and tramples underfoot those who encounter and come to know him, but a king rather who cherishes his subjects, preserves them, and lifts them up to participate in his very life, making them his friends, his very brothers and sisters.

Faith in a historical person who, in human terms was rejected, and so was a failure, and was executed, but who, through a mysterious, astonishing act of divine power, could not be held by death.

Faith not in precepts, laws, codes and rules, but in him, and him alone.

And all of the Church’s “new evangelization” — all of the recourse to new technology — will serve no purpose if we do not lead people to an encounter with this Jesus, an encounter unmediated by any technology whatsoever, but as truly real as a mother hugging her child, or a brother greeting his brother.

After meeting with Archbishop Celli and Monsignor Tighe (pronounced “Ty”), I came out onto the via della Conciliazione and ran into Sister Judith Zoebelein, a Franciscan Sister of the Eucharist, who hails from, of all places, Meriden, Connecticut — the city where I was born.

I have known Sister Judith for 20 years, not well, but greeting her a dozen times or, or twice a dozen, in the streets of Rome. 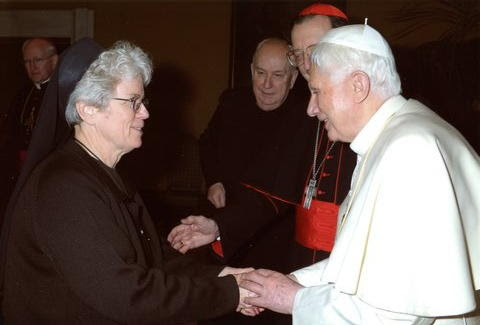 On February 16 this year, Sister Zoebelein met Pope Benedict, who thanked her for her years of work. (Photo above)

A few days later, she recievd the Pro Ecclesia et Pontifice Award, the highest honor given to a woman religious or a lay person by the Vatican, presented to her by Giovanni Cardinal Lajolo, then-President of the Governatorate of Vatican City State.

Cardinal Lajolo recounted how his second in command, Msgr. Danzi, called Sister Judith “little pilgrim” as she was always going around to the different Vatican offices with her bag of tools and pieces of software to help out whoever needed her computer expertise. 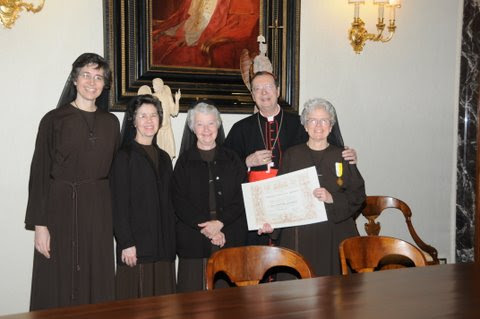 I greeted sister, and we chatted a minute. She said she had changed jobs, and was now working at the office for inter-religious dialogue.

I invited her to have a coffee at the little bar just next door to via della Conciliazione #5.

She had a cafe latte, and I a latte macchiato, as I usually do, and I asked for a “cornetto semplice” (a simple brioche, with no jam or filling inside) but they were sold out, and had only blueberry, so I took that one.

We continued to talk, and I said I was always glad to meet her because she came from Meriden, where I was born, and I always enjoyed thinking of the apple orchards of Wallingford, the next town over, where my granparents lives, and running a running loop, especially in autumn, up into Meriden and back to Wallingford.

And she said, “I’d forgotten you were born in Meriden. How funny.”

We said a few other things, then she fixed her gaze on me and said: “You are in your 60s now, aren’t you?

“Close enough,” she said. “Your life is going to pass through a great change. A great transition. It happens to all of us.

“You have proved everything you have to prove with your mind. Now go deeper. Find wisdom. Live from your heart, not your mind.

“As we get closer to death, and this is true for me as well, you realize what really matters. The superficial things start to drop away. It is God’s way of calling us toward him.”

I was a bit taken aback by her words.

“Well,” I said. “What do you think is the first step. The first thing to do?”

And she said: “Get rid of all the lies. Tell the truth, and first of all, to yourself. It’s hard. But you must do it. We all have to.

I paid for our drinks, and the blueberry brioche (mirtillo).

And I left and walked down the via della Conciliazione, shaking my head, reflecting on her words.