The Resignation of Pope Benedict XVI 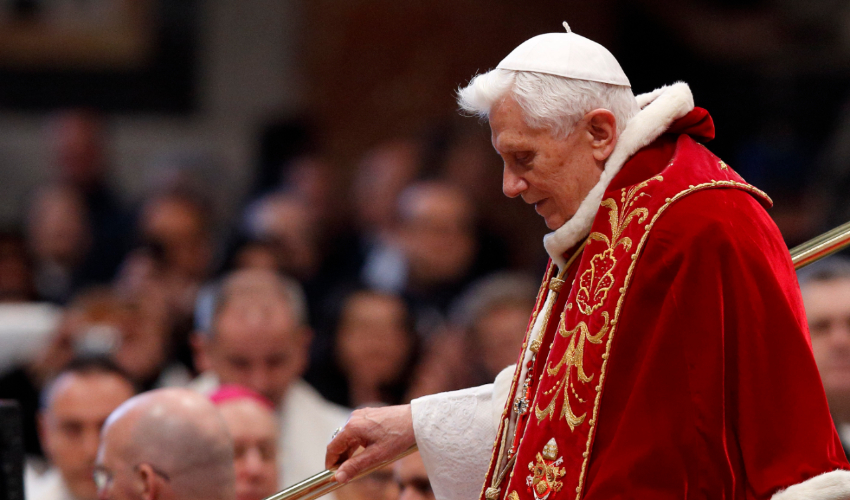 Today is the 6th anniversary of Pope Benedict XVI’s February 11, 2013 announcement, on the Feast Day of Our Lady of Lourdes, that he had decided, after much prayer and reflection, to resign from the papacy.

When I first heard the news that morning, I could not, and did not, believe it.

I checked several sources, because I thought the first reports were some type of joke.

Then I learned that the reports were true.

Still, since the idea of a single successor of Peter as the “Papa,” or “spiritual father” of our Church, was so deeply ingrained in my thinking, in my understanding of Catholicism, I could not fully grasp the meaning of the decision.

It left me off balance.

Nor could I ever fully adjust to the idea of having “two Popes,” “two fathers.”

And, in a certain sense, this sense of being “off balance” has continued for six years now, to this day.

Among the many other things in our world and culture and time that pose challenges to our faith and understanding, for me, this remains one.

I did meet Pope Benedict — whom I came to know well in the 1980s and 1990s and early 2000s, when I saw and spoke with him many times, and published many articles and cover stories about him and his actions and thoughts in the magazine Inside the Vatican — a year and a half ago, in June 2017, privately, for a few minutes in the Vatican Gardens, just after he had finished praying the rosary with his secretary, Archbishop Georg Gaenswein.

I was happy to be with him, in his presence. We sat on a bench together in the Gardens. It was almost evening.

I had it in my mind to ask him something about his resignation — about what had persuaded him to take such a step, yet to continue to wear the white robes traditionally associated with the papacy… and to tell him how deeply his decision had touched me, yet also, how off balance it had left me, as a Catholic. Just to share that with him.

But, like my own father, who is now 92 — just a few months older than the emeritus Pope, who will turn 92 in two months time — Benedict is now old. His white hair is wispy, his skin thin, delicate, almost translucent.

Within two or three seconds it seemed clear to me that we should speak only of simple things, not of anything complicated or profound, or possibly painful.

So I renounced the question, I just let the idea go.

And so he asked when we had last met, and how I was doing, and how the magazine was doing, and I said our last meeting had been in 2010, at a concert with the Russians (which he remembered), and that I was fine, and that the magazine was doing well though it was still small and fragile, and I did not ask him to talk about why he had resigned, or how much it had disturbed me and pained me to see him fly away from the Vatican on February 28, 2013, in a white helicopter flying out over St. John Lateran toward Castel Gandolfo.

Life is filled with moments when one would like to say something, and achieve clarity, and dispel confusion, yet one remains silent, the words are not uttered, the question in ones heart not asked, and clarity is not achieved, and confusion not dispelled.

This is part of the sorrow we bear in this imperfect world, a world in which it seems that our perfection must be, in part, to bear the imperfection with serenity, however difficult and painful.

St. Paul speaks prophetically of a time when we will no longer see the things of this world and the mysteries of God “as through a glass darkly” but rather “face to face.”

We do have this hope, that many things that now seem hard to understand, and to accept, will then be seen clearly and understood in full.

But until that time, which we believe will come, we wait, catching only glimpses, hints, of the truth, bearing the deep sorrow of not standing fully in the light we long for while praying to be worthy of it, when that day does come and the true light shines fully upon us, and into our most intimate depths, illuminating everything.

We believe that those who have gone before us, our mothers, our fathers, are already living in that light, and that offer some consolation as we continue on this journey in the hope of someday joining them…

Best wishes, again, to Emeritus Pope Benedict, on this anniversary of his resignation.