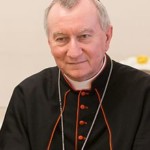 Several Russian news outlets have just reported that the announced August trip of the Vatican’s Cardinal Secretary of State Pietro Parolin (photo left) — the Number 2 man in the Vatican after Pope Francis himself — will take place from August 20 to 25, in a little more than two weeks from today. The Vatican has not officially confirmed those days, but Parolin has said publicly that he will make a trip to Moscow before the end of August, so the dates make sense. (link)

A few days ago, I was interviewed in Rome about the importance of the trip by Elise Harris of Catholic News Agency, now a part of the EWTN television network.

Below is the article Harris prepared on the basis of that interview. 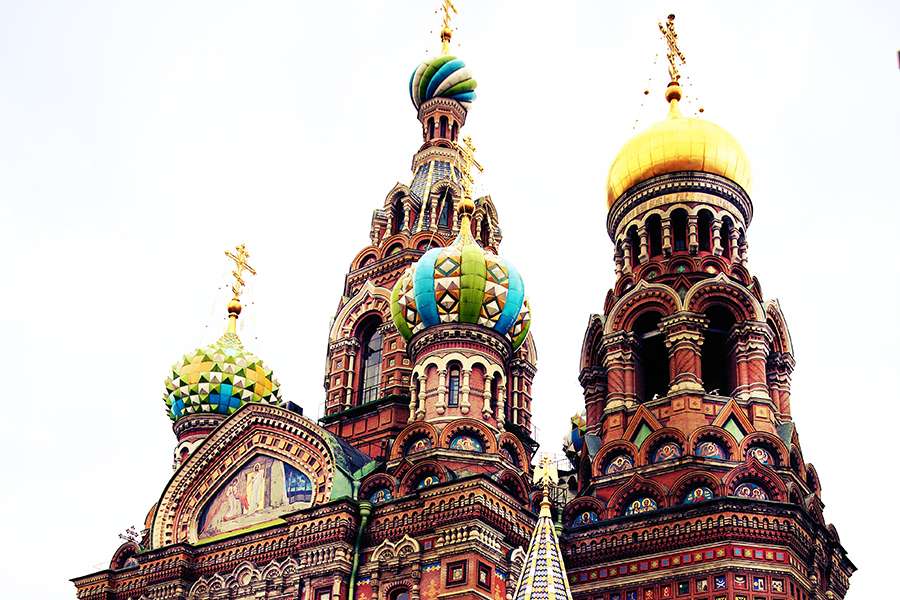 Vatican City, Aug 3, 2017 / 06:01 am (CNA/EWTN News).– The Vatican Secretary of State’s visit to Russia later this month comes at a crucial juncture for the country, and is packed with both political and religious significance.

He is expected to meet with President Vladimir Putin and leaders of the Russian Orthodox Church during the trip.

On a political level, the visit of Cardinal Pietro Parolin – the dates of which have yet to be announced – comes as Russia faces rising tensions with the West over Syria and Ukraine, and possible meddling in the 2016 U.S. presidential election.

Just this week the U.S. slapped Russia with more economic sanctions due to Russia’s involvement in the election. The decision prompted Putin to expell 755 people from its U.S. embassy and consulates.

On a religious level, Cardinal Parolin’s visit also comes at a key time, falling just a year and a half after the historic February 2016, meeting between Pope Francis and Patriarch Kirill of Moscow, head of the Russian Orthodox Church.

The meeting marked the first time leaders from each Church sat down together since the Russian Orthodox Church was founded some 400 years ago.

While there might be fear and criticism regarding their engagement with Russia, “the Vatican is nevertheless willing to take this risk,” seasoned Vatican analyst Robert Moynihan told CNA.

“On the world scene there is no more important and more significant relationship right now than that between Russia and the West,” he said.

So for the Vatican “to bring the highest diplomatic figure to the center of Russia and to have him speak with the highest authorities is a dramatic and significant gesture on the part of Pope Francis.”

“The benefit of direct contact and of sitting and talking is so great, and the threat of wider conflict in Ukraine and of deeper division between the West and Russia is viewed in Rome as so dangerous, that the Vatican … is willing to publicly make this trip and underline the fact that they have hope that these types of talks can lessen tensions,” he said.

“So this is the delicacy of the moment. I think it’s a courageous act on the part of the Vatican.”

Moynihan is an American journalist and is the editor-in-chief of Inside the Vatican magazine. Holding a Ph.D in Medieval Studies from Yale University, he is also founder of the Urbi et Orbi Foundation, which is dedicated to building relations between Catholics and other Christians throughout the world.

Throughout his career he has taken a special interest in Russia, having traveled there some 30 times since 1999.

Moynihan said the significance of Cardinal Parolin’s visit and the meetings he will hold have deep historical roots, making the trip a pivotal moment not only for the present, but also in terms of what the future could look like.

Quoting an Oct. 1, 1939, BBC broadcast with Winston Churchill, Moynihan said Russia “is a riddle wrapped in a mystery inside an enigma.” As such, it’s something “difficult to penetrate, to understand, [and] is a fascinating and important country.”

Russia is “a country that we should not put into a corner and condemn, but a country we should engage with and a country which can teach us many things,” he said.

In many ways still grappling with the dissolution of the Soviet Union, Russia is in a sense trying to find its place, he said, adding that the complexity of the current situation has been triggered at least in part by the events that followed the fall of the Iron Curtain.

Among these events are the re-unification of Germany, the integration of Eastern bloc countries into Europe, and current questions on Russia’s own integration into Europe and what role border countries – namely the Baltic states and others such as Belarus and Ukraine – will play.

Looking specifically to Ukraine, Moynihan stressed the severity of the situation, and noted that most Ukrainians would sadly recognize that the democratic process in their country is going though “an extremely difficult transition period.”

This is due largely to the conflict in the eastern region of the country, which has killed more than 10,000 people since April 2014, and crippled their economy.

With Cardinal Parolin’s visit, the Holy See will have the opportunity to play a similar role to the one it had in helping to broker restored ties between the U.S. and Cuba during the Obama administration, leading to the thaw of a 50-year freeze in relations.

Part of this mediation could come through the Ukrainian Greek Catholic Church, which is 4-5 million people strong in a country of 40 million, and with the Latin and Orthodox communities in Ukraine.

“I’ve always thought there could be a ‘religious off-ramp’ that could cut through the geopolitical and political haggling and distrust to say we are all human beings, we all have the faith in God and in Jesus Christ,” and even with differences, are able to go beyond “this geopolitical conflict,” Moynihan said.

In looking at the situation between Russia and Ukraine from both the religious and geopolitical sides, the Vatican recognizes “that it’s always good to have channels of communication open,” he said.

“The idea that the Vatican and that Cardinal Parolin himself continually emphasize that it’s better to communicate and to talk than to be in a cold, non-communicative standoff.”

Cardinal Parolin’s expected meeting with Patriarch Kirill comes as part of what Moynihan termed “a longing” to restore at least partial, if not full, unity among the Catholic and Eastern Orthodox Churches.

Since the 1964 meeting of Bl. Paul VI and Patriarch Athenagoras of Constantinople, the two traditions have reached a point “where the profound suspicion and distrust of some past centuries has diminished due to the hard work of thoughtful men of both Churches as they’ve come to respect and appreciate the faith and learning of their counterparts.”

There are still those in the Orthodox community who view Rome with suspicion, believing it to be a controlling entity that would limit their freedom and strip them of their traditions.

On the other hand, many in the Latin rite hesitate to draw closer to the Orthodox for fear that they are often closely linked with their governing states.

According to Moynihan, many fear that the meeting between Cardinal Parolin and Putin would be used “as a piece in a chess game for geopolitical purposes,” to make Russia seem less aggressive.

“The Vatican is nevertheless willing to take this risk,” he said, because it have hope the meeting might help “prepare the way for a just peace in situations of conflict and for closer union between these thousand year-divided Churches.”

Turning to the days of St. John Paul II, Moynihan noted that the Polish Pope, who was very familiar with Russia and the Soviet regime, had said that “the Church needs to breathe with two lungs, that we need to have closer relations with the Orthodox.”

Russian Orthodox themselves were “brutally and cruelly suppressed” under the Soviet Union, he said, noting that thousands of churches were burned, many thousands of Orthodox Christians were arrested, and hundreds of priests executed.

“The atheist, communist regime was a brutal regime for our Christian brothers in the Soviet Union and in Russia, so I think this is a cause for us to feel compassion toward them,” Moynihan said.

When faced with accusations that the Russian Orthodox Church is nationalistic and is being used as a puppet of the government, the journalist said he insists that, in his opinion, the Russian government “is attempting to become more of a normal country’s government.”

“It’s in reaction to the ideological rigor of the communist system that they are still torn by the mixture of nostalgia for the Soviet time and the attraction of this Western, liberal democratic culture.”

“They’re right in the middle of this transition process,” he said, noting that in recent years they have been rebuilding their churches and re-studying Christian tradition.

In his opinion, Moynihan said efforts are those of a people trying to return to the “wellspring of faith” that was cut off for 70 years by “a very pitiless, tyrannical, atheist regime.”

“For this reason I feel up and down the line we ought to engage with the Russians and with all Eastern Europeans, and that we should gain from them a sense of how Christians can survive under cultural and political pressure as we ourselves face our own challenges in our increasingly post-Christian Western societies.”

In this sense, Cardinal Parolin’s visit marks “one more step in a multi-decade, multi-century process in which the Church tries to keep communications with the Eastern Churches.”

One point Cardinal Parolin and Patriarch Kirill are likely to touch on in their upcoming meeting is the joint declaration signed by the Patriarch and Pope Francis during their meeting in Havana last year, which highlighted the need to work together to protect the environment, the poor, and the persecuted.

But odds are, when he meets with Putin, Cardinal Parolin will try to move the political pen on touchy issues, reinforcing the idea that the Holy See “can serve as a type of honest broker in between colossal powers, which are as we all know positioning themselves in very significant ways that will effect the future of Ukraine, the future of Eastern Europe, the future of Europe as a whole and the future of the world.”

So it is against this political and religious backdrop that Cardinal Parolin will enter “right at the hinge-point of this decision, of whether we will keep Russia excluded from polite society, whether we will actually confront Russia and have a conflict or a war,” Moynihan said.

“This is a dramatic moment, and I wish Cardinal Parolin all the best. I think he’s a balanced, competent, thoughtful man,” he said, but noted that there are still those who are concerned, wishing to keep Russia isolated on the global playing field.

“I take a different view,” he said. “I think it’s a trip that’s filled with hope and is something that must be done in order to allow us to evade, if we may evade, a great tragedy of wider conflict that could harm the entire region and the world.”

A map included with the article shows graphically how Europe remains in two parts religiously: majority Catholic in the West and majority Orthodox in the East. St. John Paul II hoped Europe would “breathe with two lungs” and said this would require these two halves of Europe and of Christianity to draw closer together. The trip of Cardinal Parolin takes place in this context. 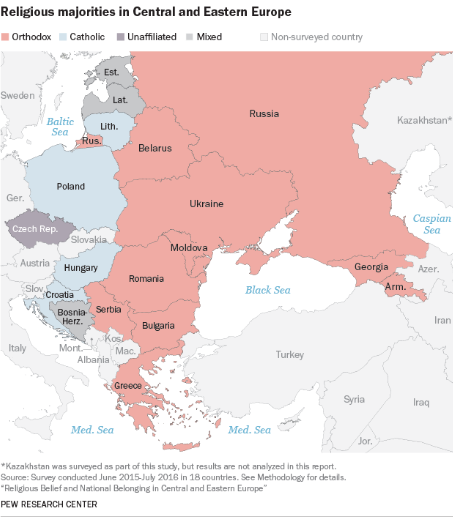