The first and most striking impression left after the 4-day August 21-24 trip to Russia of Vatican Secretary of State Cardinal Pietro Parolin is the contrast between the trajectory of the relations between the Holy See and Russia and between the rest of the West and Russia.

And Pope Francis is said to be very pleased by this greater warmth in Vatican-Russia relations, even as the United States and the other western powers retain sanctions against the country led by Vladimir Putin.

The second impression is that religion — religious faith, Christian faith — is an increasing factor in the relations between the two parties, and in the life of Russia.

(Cardinal Parolin with Russian President Vladimir Putin on August 24 in Sochi, Russia. The two had a longer-than-expected meeting) 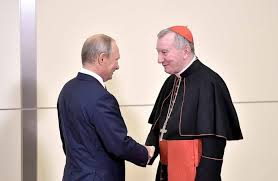 Pope Francis is “pleased” with the results of Parolin’s visit, Parolin told Vatican Radio on August 25, the day after his return to Rome. 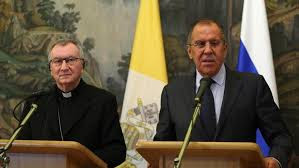 Parolin said he briefed Pope Francis immediately upon his return to the Vatican on August 24.

He said Francis “was pleased with the impressions and positive results which I shared with him.”

Parolin said he relayed the many greetings he was asked to give the Pope “from all the people I met, including the warmth and closeness of the Catholic community… and the fraternal greetings of Patriarch Kirill.”

The Vatican Secretary of State said he thought the outcome of the trip was “substantially positive.”

These meetings, he said, “were truly characterized by a cordial, listening, and respectful climate. I would define them as important and constructive encounters.”

During his meeting with Lavrov, Parolin brought up the needs of the local Catholic Church, especially the need for several churches confiscated by the Communist regime to be returned.

He said the local Catholic community needs these churches in order to provide “adequate places of worship.”

“We spoke a little about this new climate or atmosphere, which permeates the relations between the Russian Orthodox Church and the Catholic Church,” he said.

Parolin said his Orthodox interlocutors were “touched by the faith and religiosity of the people” on display as the relics of St. Nicholas of Myra visited Moscow and St. Petersburg.

Some 2.5 million people visited the relics before they were returned to Bari in Italy.

“It was underlined how even many Russians, who belong to the Orthodox tradition but do not practice, in this occasion have moved closer to the Church,” he said.

Other topics discussed, he said, were ways of taking advantage of this new climate to further improve relations and collaborate on cultural, academic, and humanitarian initiatives.

(Note: Our magazine’s Urbi et Orbi Foundation has supported some of these cultural, academic and humanitarian initiatives, and we invite you to contact us if you would like to participate in or support these efforts.)

“Slightly thorny issues were also touched, respectfully and at the same time frankly, regarding relations between the two Churches,” Parolin said. “But, we tried to give them — at least in my opinion, what I was able to glean — a positive sense, that is, to explore common paths for dealing with and for seeking to give birth to a solution to these problems.”

Turning to the situation in Ukraine, Parolin said that, “for now, there is no news; perhaps, it is premature.

“If there are seeds of good, which we have sought to sow,” he said, “we hope the Lord will make them sprout and bring them to fruition.” He said the “Ukrainian question” is of “great concern for the Holy See.”

“The Pope has pronounced on this theme several times,” he said. “It’s obvious that it could not be ignored, this theme. Above all, I would [speak] of the need to try to see and to evaluate if there were some concrete steps that could be made towards a durable and just solution to the conflict.”

Parolin continued: “It has been noted that the Holy See has insisted above all on the humanitarian aspects, beginning with the important initiative of the Pope for Ukraine.

“In this sense, for example, one theme is that of the liberation of prisoners.

“This is one humanitarian theme that could be truly important to giving a little impetus to the whole process, even the political one, in order to get out of this situation of stasis and to advance — for example — the theme of a truce or ceasefire, the theme of security conditions in the territory, and the theme of the political conditions necessary to make progress on a global solution.”

Cardinal Parolin said his meeting with President Putin in Sochi on Wednesday, August 23, was “a cordial encounter.”

He said the two men discussed the conflicts in the Middle East, especially in Syria, and the presence of Christians there. Both Russia and the Holy See, he said, are particularly interested in the theme of persecution of Christians and other minorities.

Opening the meeting, Putin told the cardinal, “I am very pleased to see that the dialogue continues between our Churches,” and he expressed his pleasure that Cardinal Parolin had met Patriarch Kirill.

“There is no doubt that the common humanitarian values that the Holy See and the Russian Orthodox Church defend form the foundation for relations between the two Churches and between Russia as a state and the Vatican,” Putin said in his remarks.

Cardinal Parolin told Putin, “I see a new dynamic that has emerged over the recent months and years in relations between the two Churches. I hope that all participants in this process will continue working in this direction in order to expand our cooperation and bring us even closer together.”

Cardinal Parolin said he presented the Russian president with “several situations of some difficulty for the Catholic community.”

His main point, he said, was the desire to transmit the important role Russia has to play in promoting peace.

“Russia, for its geographical position, its history, its culture, and its past, present, and future, has an important role to play in the international community and in the world. Therefore, it has a particular responsibility regarding peace: both the country and its leaders have a great responsibility to build peace, and they must truly strive to put the higher interests of peace above all other interests.”

The first, he said, “was the beautiful moment of the Mass celebrated with the Catholic community. The Cathedral was packed full of people, and that was somewhat of a surprise since it was a weekday”. He also said he was touched “by the faith and devotion” of the people and by their “attachment to the Pope.”

Second was his brief visit to the sisters of Mother Teresa in Moscow. “We were able to meet and greet all the people they assist, and even there the warmth they have the for the Pope was evident.”

Lastly, he mentioned his visit to the Orthodox Cathedral of Christ the Savior in Moscow one evening.

“The cathedral had been blown up during the Communist regime,” Parolin said. “So it was also a moment to recall this painful history, during which some people wanted completely to uproot the faith from the heart of the people and eliminate any sign of the presence of God and the Church in that land.”

This attempt, he said, “did not succeed, because God is greater than the projects of men.”

He said planning a papal trip to Russia was not on the agenda.

Parolin said his meetings with government officials were designed to share “Pope Francis’ interest in bilateral relations between the Holy See and the Russian Federation as well as his concerns in the sphere of international affairs.”

“Obviously,” the cardinal said, “the meeting offered an occasion to discuss some concrete questions regarding the life of the Catholic Church in the Russian Federation, including the difficulties that remain in obtaining work permits for non-Russian religious personnel and the restitution of some churches, which are needed for the pastoral care of Catholics in the country.”

Many Church buildings were confiscated by the former Soviet government and never returned.

Regarding international affairs, Cardinal Parolin said he and Lavrov discussed several ongoing conflicts, including the war in Eastern Ukraine and the war in Syria.

In situations of war, he said, the Catholic Church often is directly involved in promoting humanitarian aid for the victims, but it also works on a diplomatic level to promote a negotiated peace with guarantees of “justice, legality, truth” and the safety of civilians.

The Russian foreign ministry posted online the first minutes of the working meeting between Cardinal Parolin and Lavrov.

The foreign minister told the cardinal, “We see that our positions are close on a number of current issues, including the peaceful settlement of crises, fighting terrorism and extremism, promoting the dialogue among religions and civilizations and strengthening social justice and the role of the family.”

And, he said, it is important that the strengthening of Vatican-Russian relations is “complemented by the dialogue between religions, which was launched during the historical meeting between Patriarch Kirill and Pope Francis in Cuba.”

Parolin began his visit to Russia with a meeting with Metropolitan Hilarion of Volokolamsk, head of external relations for the Russian Orthodox Church.

After the meeting, he told reporters their time together was very constructive, and that even though there are “thorny issues,” there also is a great desire to overcome them.

As an example of an ongoing difficulty, Parolin said the existence of the Ukrainian Catholic Church “remains for the Russian Orthodox Church an obstacle.”

The Vatican Secretary of State on August 21 described the tone of his two-hour meeting with Metropolitan Hilarion, chairman of the Department of External Church Relations of the Patriarchate of Moscow, as “very constructive.”

The website of the Moscow Patriarchate showed a picture of Parolin clasping hands with Hilarion and holding talks in a room decorated with Orthodox icons.

It said the two men discussed “key topics of bilateral relations… in the context of the current international situation.”

Answering journalists’ questions after the Monday meeting, the Vatican Secretary of State said that a good part of the conversation touched on the conflicts in Syria and Ukraine as well as on the Holy See’s concern for the situation in Venezuela.

The Russian news agency Tass highlighted the fact that the Russian Orthodox Church and the Holy See reportedly share the same position regarding “the need for a peaceful solution for the middle-eastern region and in particular for Syria” and that a return to normality in that country will be possible only after the total expulsion of IS militants from the occupied territories.”

Cardinal Parolin reportedly noted that Christians are beginning to return to the areas that have been taken back from the so-called Islamic State, but said that notwithstanding some positive developments, the general situation remains very difficult, especially from a humanitarian point of view.

In the evening August 21, Cardinal Parolin presided over a Mass for Moscow’s Catholics in the Cathedral of the Immaculate Conception.

Before Mass, he met with the country’s Catholic bishops.