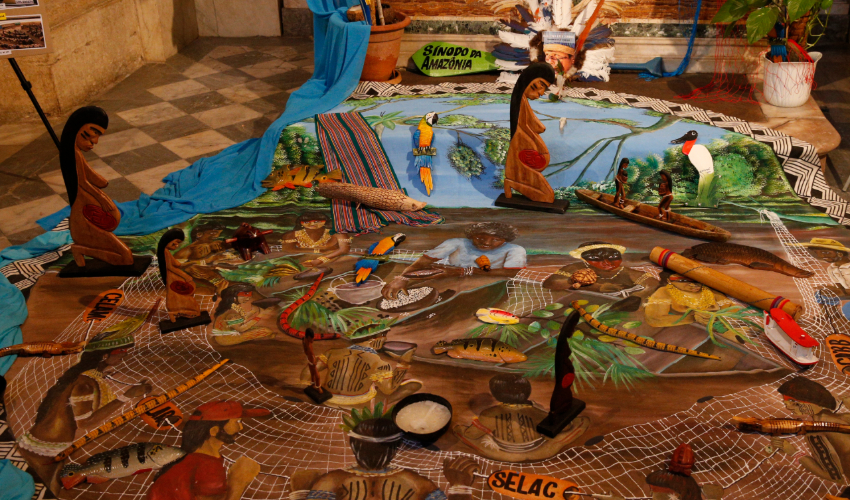 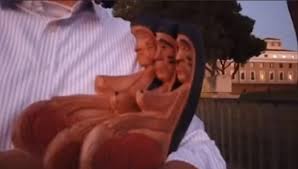 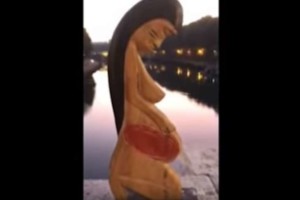 Top, a carved wooden image of a pregnant woman which was in the first chapel at the back of the Church of St. Mary in Traspontina in Rome for the past two weeks, as the Synod of Bishops on the Amazon Region has been held. (I went to the church a few days ago and saw the images there, as well as a poster of a woman nursing a child on one breast and a small animal on the other breast. I asked a Catholic nun from Brazil if she thought the poster was appropriate and she said she did, because it showed the intimate connection between human life and all animal life in the great cycle of life in this world.

Critics had been asking why this image, said to be a fertility image, or idol, was placed in a Catholic church, on the floor of a chapel, just in front of the altar.

Many reports and comments on the internet by Catholic observers had expressed concern that this image (these images) constituted a profanation of the church.

This same image was also present in the Vatican Gardens on October 4, when a ceremony attended by Pope Francis which included a tree-planting took place. (link)

Middle, the image and two others like it in the arms of an unknown man who took it out of the church this morning just before dawn and threw it into the Tiber River from the Ponte Sant’ Angelo.

A video taken by the man and a second man with him was posted several hours ago on the internet, showing the images being removed from the church, carried to the bridge, and thrown into the river. (link)

Bottom, the fertility image on the bridge just before it was pushed over the edge and into the water. You can see that the sun has not yet risen, so the time is just before dawn, which came today exactly at 7 a.m.

This sets the time of these events between about 6:30 and 7 a.m. this morning.

Today, October 21, was said to be the hottest October 21 in Rome in 300 years. (A taxi driver said that to me.) In any case, it was an unusually warm day for Rome in late October.

By mid-morning, a rumor began to spread that two men had entered the church of St. Mary in Traspontina this morning at dawn and had taken several images of a naked, pregnant woman from two chapels in the back right-hand corner of the church and thrown the images into the Tiber River.

By this evening, almost 70,000 people (it may be more by the time this reaches you) had viewed the almost silent video of the taking and tossing of the images, which may be viewed at this link:

Here is a thorough, clear account of what is known at this time by Hannah Brockhaus of Catholic News Agency:

A video uploaded to YouTube on Oct. 21 shows two men taking several wooden figures of a nude pregnant woman from a church near the Vatican and throwing them into the Tiber River.

From the four-minute video it appears the event took place around dawn Oct. 21, when a person holding the video camera appears to enter the Church of Santa Maria in Traspontina. The church is in the immediate area of the Vatican, and has been the location of events at which the controversial carved figure of a woman has been present.

Inside the church, a man is seen entering a side chapel and then leaving with a figure. The two people then exit the church and the video shows them carrying five of the carved images of the woman toward Castel Sant’Angelo. The men throw the figures from the side of the Sant’Angelo bridge into the Tiber River.

No faces are shown and the video was uploaded to YouTube under an anonymous account. As of publication, the video had amassed over 12,000 views.

The same YouTube account uploaded a second video of the event Oct. 21. The second video is shorter, of higher video quality, and has been edited with music added.

In the caption beneath the second video, it says the action was taken “for only one reason: Our Lord and saviour Jesus Christ, his blessed Mother, and everybody who follows Christ, are being attacked by members of our own Church. We do not accept this! We do not longer stay silent! We start to act NOW!” [sic]

“Because we love humanity, we can not accept that people of a certain region should not get baptised and therefore are being denied entrance into heaven,” the caption continues. “It is our duty to follow the words of God like our holy Mother did. There is no second way of salvation. Christus vincit, Christus regnat, Christus imperat!”

Asked about the event at a press conference Oct. 21, Paolo Ruffini, head of Vatican communications, called it a “stunt.”

He said it is difficult to be asked for a Vatican reaction to something that had happened only a short time earlier, adding that “to steal something from a place and, in sum, to throw it away, is a stunt.”

Recalling comments he had made last week that the figure “represents life, fertility, the earth,” Ruffini said Oct. 21 that discarding the statues “is a gesture that seems to me to contradict the spirit of dialogue that should always animate everything.”

“I don’t know what else to say. It was a theft,” Ruffini added.

Fr. Giacomo Costa, a communications official for the Amazon synod, said Oct. 21 the carved figure represents life in the Amazon in the same way a “glass of water” or “parrots” represent life in the region.

Focus on the statues, and the gesture of throwing them into the Tiber river, “doesn’t make sense,” Costa said.

The priest added that “really, however, it is never constructive to steal an object.”

The controversial image was part of a tree-planting ceremony in the Vatican Oct. 4 and an Amazonian Via Crucis Oct. 19. The same figure has been present in the vicinity of the Vatican at various events happening during the synod, under the “Casa Comun” initiative, many of which have taken place at the Church of Santa Maria in Traspontina.

The Synod of Bishops on the Pan-Amazonian region is a meeting on the life and ministry of the Church in the Amazon. It is taking place at the Vatican Oct. 6-27.

As of this writing, it is not yet known who the two men are, or whether they will be sought and arrested by authorities for theft, or not.

Here are some other links to articles related to this event, some with comments from readers: