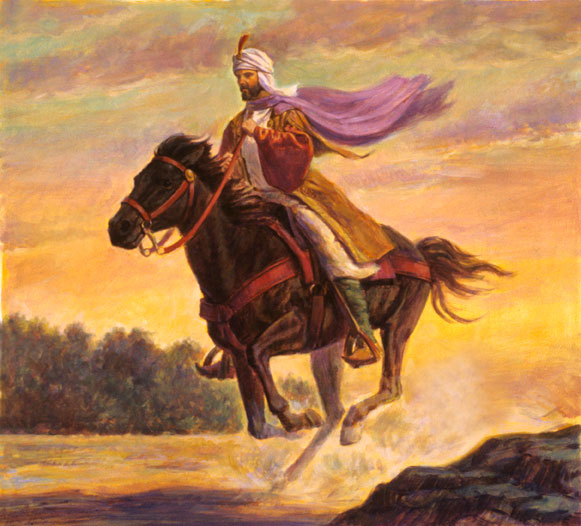 The Persian wise man, Artaban, hero of the book The Other Wise Man, written in 1895 by Henry van Dyke. The book tells how Artaban, who had planned to set out with the other three wise men — Caspar, Melchior and Balthasar (link and link) — to find the Christ Child, was delayed along the way. He comes to Jerusalem after Joseph, Mary and Jesus had fled to Egypt, and sets out after the slaughter of the innocents to find them in Egypt. But many years pass, and he does not find the child…

Here below is the text of Part #9 of this story, so you may listen to the reading and read along with the text…

We have now posted the 9th in a 10-part series of a reading of the classic Christmas story “The Other Wise Man.” It is available here on YouTube (or by clicking the video below) or on Rumble.

Here is the text of Part #9 of the story of “The Other Wise Man,” by Henry van Dyke:

Part #9: The Other Wise Man

So I saw the other wise man again and again, travelling from place to place, and searching among the people of the dispersion, with whom the little family from Bethlehem might, perhaps, have found a refuge.

He passed through countries where famine lay heavy upon the land, and the poor were crying for bread.

He made his dwelling in plague-stricken cities where the sick were languishing in the bitter companionship of helpless misery.

He visited the oppressed and the afflicted in the gloom of subterranean prisons, and the crowded wretchedness of slave-markets, and the weary toil of galley-ships.

In all this populous and intricate world of anguish, though he found none to worship, he found many to help.

He fed the hungry, and clothed the naked, and healed the sick, and comforted the captive; and his years went by more swiftly than the weaver’s shuttle that flashes back and forth through the loom while the web grows and the invisible pattern is completed.

It seemed almost as if he had forgotten his quest.

But once I saw him for a moment as he stood alone at sunrise, waiting at the gate of a Roman prison.

He had taken from a secret resting-place in his bosom the pearl, the last of his jewels.

As he looked at it, a mellower lustre, a soft and iridescent light, full of shifting gleams of azure and rose, trembled upon its surface.

It seemed to have absorbed some reflection of the colors of the lost sapphire and ruby.

So the profound, secret purpose of a noble life draws into itself the memories of past joy and past sorrow.

All that has helped it, all that has hindered it, is transfused by a subtle magic into its very essence.

It becomes more luminous and precious the longer it is carried close to the warmth of the beating heart.

Then, at last, while I was thinking of this pearl, and of its meaning, I heard the end of the story of the Other Wise Man.

A Pearl of Great Price

THREE-and-thirty years of the life of Artaban had passed away, and he was still a pilgrim, and a seeker after light.

His hair, once darker than the cliffs of Zagros, was now white as the wintry snow that covered them.

His eyes, that once flashed like flames of fire, were dull as embers smouldering among the ashes.

Worn and weary and ready to die, but still looking for the King, he had come for the last time to Jerusalem.

had often visited the holy city before, and had searched through all its lanes and crowded hovels and black prisons without finding any trace of the family of Nazarenes who had fled from Bethlehem long ago.

But now it seemed as if he must make one more effort, and something whispered in his heart that, at last, he might succeed.

It was the season of the Passover.

The city was thronged with strangers.

The children of Israel, scattered in far lands all over the world, had returned to the Temple for the great feast, and there had been a confusion of tongues in the narrow streets for many days.

But on this day there was a singular agitation visible in the multitude.

The sky was veiled with a portentous gloom, and currents of excitement seemed to flash through the crowd like the thrill which shakes the forest on the eve of a storm.

A secret tide was sweeping them all one way.

The clatter of sandals, and the soft, thick sound of thousands of bare feet shuffling over the stones, flowed unceasingly along the street that leads to the Damascus gate.

Artaban joined company with a group of people from his own country, Parthian Jews who had come up to keep the Passover, and inquired of them the cause of the tumult, and where they were going.

“We are going,” they answered, “to the place called Golgotha, outside the city walls, where there is to be an execution. Have you not heard what has happened? Two famous robbers are to be crucified, and with them another, called Jesus of Nazareth, a man who has done many wonderful works among the people, so that they love him greatly. But the priests and elders have said that he must die, because he gave himself out to be the Son of God. And Pilate has sent him to the cross because he said that he was the ‘King of the Jews.'”

How strangely these familiar words fell upon the tired heart of Artaban!

They had led him for a lifetime over land and sea.

And now they came to him darkly and mysteriously like a message of despair.

The King had arisen, but He had been denied and cast out.

He was about to perish.

Perhaps He was already dying.

Could it be the same who had been born in Bethlehem thirty-three years ago, at whose birth the star had appeared in heaven, and of whose coming the prophets had spoken?

Artaban‘s heart beat unsteadily with that troubled, doubtful apprehension which is the excitement of old age.

But he said within himself: “The ways of God are stranger than the thoughts of men, and it may be that I shall find the King, at last, in the hands of His enemies, and shall come in time to offer my pearl for His ransom before He dies.”