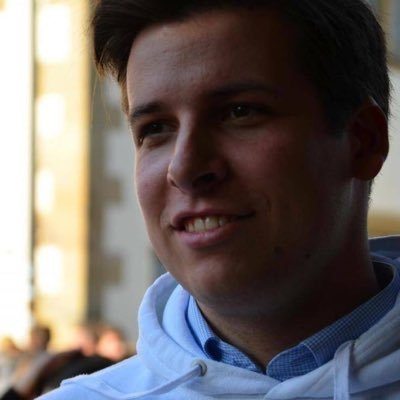 Alexander Tschugguel, 26, the young Catholic man from Vienna, Austria, who tossed five Pachamama images into the Tiber River in Rome on the morning of October 21.

Tschugguel revealed in a video this morning that he was, in fact, the man, unidentified up until now, who took the images from the Church of St. Mary in Traspontina.

Here is a link to Tschugguel’s video on YouTube. It is well worth watching (link).

It only takes a bit more than 5 minutes to view the entire video.

1 “And God spoke all these words, saying,

2 “I am the Lord your God, who brought you out of the land of Egypt, out of the house of slavery.

3 “You shall have no other gods before me.

4 “You shall not make for yourself a carved image, or any likeness of anything that is in heaven above, or that is in the earth beneath, or that is in the water under the earth. 5 You shall not bow down to them or serve them, for I the Lord your God am a jealous God, visiting the iniquity of the fathers on the children to the third and the fourth generation of those who hate me, 6 but showing steadfast love to thousands of those who love me and keep my commandments.”

“They do not belong”

Tschugguel said he acted after many days of prayer and thought led him to the conviction that the images in St. Mary in Traspontina in Rome were “graven images” in contradiction to the 1st Commandment, and so, that those images, because they represented the “Mother Earth” goddess, “do not belong in a Catholic Church.”

“I don’t want them to think it was a coward action,” Tschugguel said, explaining why he had revealed his identity as the one responsible for removing the images from the church and tossing them into the river. “We didn’t go out earlier because we wanted the action itself being the main point of the discussions, and we wanted the people to talk about what happened and not who did it.

“But now, two weeks later, one week after the Amazon synod. We are ready. We want to face them. We wanted to show them there are some laymen … we stand up, and we don’t longer accept things like that happening in the Catholic Church.”

“I am praying for you from France”

In the YouTube comments section for Tschugguel’s video, Cecile Besnard of France wrote: “Thank you for what you did, it gives me courage to follow God’s call to enter the Catholic Church (as I am Protestant). I was thinking what’s the point of converting given what is becoming the Roman Church? But now I know true Catholicism is out there. God bless you, I am praying for you from France.”

Archbishop Viganò: “He is a hero”

“Like many others, including Bishop Athanasius Schneider and Prof. Roberto de Mattei, I think that this young man is a hero,” Archbishop Carlo Maria Viganò said to me today. “He is a person who wished to defend the 1st Commandment.”

For his part, Archbishop Viganò is persuaded that the young man’s act was the meditated act of a well-formed conscience.

“This young man acted out of his Catholic conscience,” Viganò said.

“He came to Rome, visited the Church of St. Mary in Traspontina, and saw what was in the church,” Viganò continued. “He was deeply concerned. But he did not act immediately. He went back to his home in Vienna and prayed and reflected for several days. Then he decided it was his duty to act. And now he has had the courage to reveal his name and to give interviews. I praise the great faith of this young man.”

“And a beacon for Austria”

“What this young Austrian Catholic did can be a beacon to Cardinal (Christoph) Schoenborn [Editor’s note: the archbishop of Vienna, Austria, age 74],” Viganò added.

“It can be a witness to the cardinal, to profit the Church in Austria, because the cardinal seems to have changed markedly in his doctrinal and pastoral positions in recent years, so that we can hardly recognize him anymore.

“I was present eight years ago, in April 2011, at the huge villa of the Order of Malta on the Aventine Hill in Rome, when Cardinal Schoenborn presented the YouCat, the young people’s version of the Catechism of the Catholic Church. (link)

“I was amazed and in fact edified at the solid doctrine that Cardinal Schoenborn presented. What happened since that time?”

The Catholic press in Austria, Germany and elsewhere has published stories on events and actions in Schoenborn’s archdiocese of Vienna which have raised eyebrows in conservative Catholic circles.

Schoenborn’s diocesan bulletin has included an effusively positive presentation of infant adoption by a same-sex married couple (link and link), and questionable art exhibitions have been allowed in the cathedral rectory and in an art gallery associated with the cathedral (link, link and link).

The Church around the world looks particularly to Schoenborn for clear doctrinal guidance, Viganò emphasized, because Schoenborn, a Dominican, is a well-trained, highly respected and profoundly persuasive interpreter of the thought of the great 13th-century Dominican, St. Thomas Aquinas, as well as a student of Father Joseph Ratzinger, who became Pope Benedict XVI.

One Hundred Years of Solidarity

Viganò also noted that, on November 1, just three days ago, the oldest of all the Italian bishops, a man who worked as a missionary for more than 20 years in Brazil (the subject of the Synod on the Amazon Region just concluded) turned 100 years old.

The old-style Catholic missionaries, unlike many of the missionaries of today, Viganò explained to me, baptized the indigenous peoples into the faith and hope of Christ — into the same faith they themselves had been baptized into, the same faith that a hundred generations of Catholics since the time of the Apostles have embraced and defended — and then shared each day, each week, each year, with great courage, that venerable, sublime Gospel that offers the unspeakably lofty hope of eternal life in holiness… that hope which Christ offers to all men.

But the old missionaries also helped provide true, courageous, loving support for the Indians who were searching for a life of dignity and hope despite ever-changing, often very difficult, exterior conditions, Viganò said.

In this context, he pointed out an article in the Italian press setting forth some of the things Catholic missionaries in Brazil in the past did with their lives. (link)

Bishop Aldo Mongiano, 100 (photo below), the oldest living Italian bishop, worked in Africa, then in Brazil, “to proclaim the Gospel, and risking his life for the dignity and human rights of the native Indians,” LaDifesa del Popolo, the weekly of the diocese of Padua, Italy, wrote in an article dated November 5, 2019 (tomorrow!). (link)

Pope Paul VI made Mongiano the bishop of the diocese of Roraima in Brazil in 1975.

“The large landowners did not hesitate to block, often violently, the plea of the Indian people for freedom and democracy,” the article says.

“The missionaries went and still today go from Italy and other countries to be with the last and weakest of the earth, to share their struggles and hopes, and to support them in their pleas to be treated as human beings,” the article continues.

“They did not simply display the slogan ‘we are helping them there, where they live’ but they themselves left everything to ‘be with them, live with them’ — to turn thoughts and words into concrete reality.

“They often moved with the inspiration of the Gospel as occurred in the late 1980s, when the missionaries launched a campaign of ‘one cow for every Indian.’

“The initiative sought to give one cow to every Indian because that was the condition required for the Indians to have a right to be considered land-owners.”

During those years of the 1980s and after, thousands and thousands of cows were donated by Italians, at the request of Bishop Mongiano, to help the Indians find their human dignity, and to give them a right to own land in Brazil.

Here below is a photo of this extraordinary bishop, still strong and lucid of mind today at age 100. 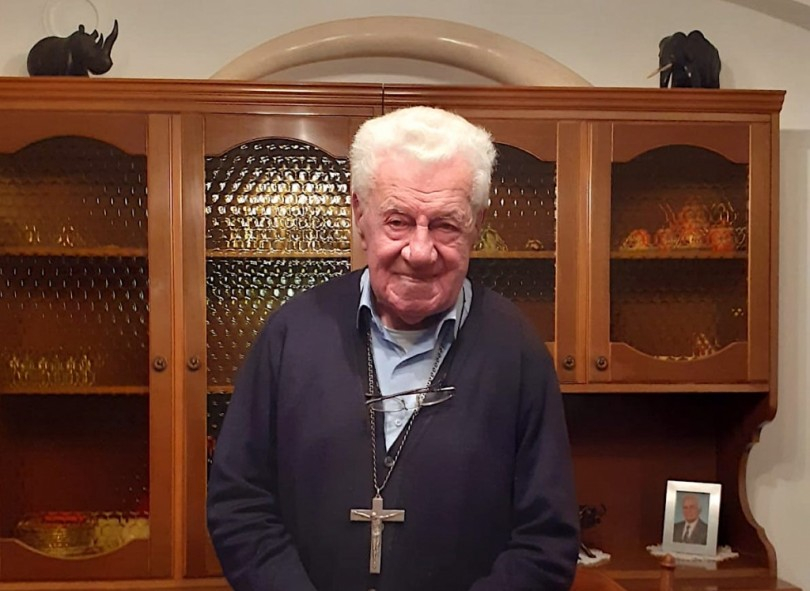 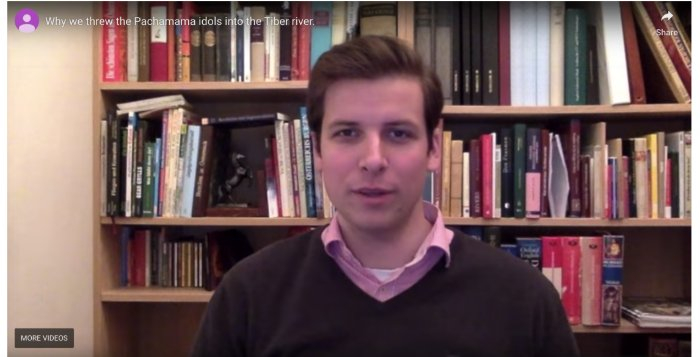 Alexander Tschugguel, 26, as he appeared this morning in his video announcing that he was the one who took the Pachamama images and tossed them into the Tiber River on October 21.