“We are brothers.”–Pope Francis to Emeritus Pope Benedict today at Castel Gandolfo

The present and former Pope met today, in a moment without precedent. And the words which remain are the ones spoken by Pope Francis to Benedict: “We are brothers.”

As Nicole Winfield put it in her comprehensive Associated Press dispatch today: “The two men in white embraced and showed one another the deference owed a Pope in ways that surely turned Vatican protocol upside down: A reigning Pope telling a retired one, ‘We are brothers,’ and insisting that they pray side-by-side during a date to discuss the future of the Catholic Church.”

In the same report, she noted: “Francis also brought a gift for Benedict, an icon of the Madonna. ‘They told me it’s the Madonna of Humility,’ Francis told Benedict. ‘Let me say one thing: When they told me that, I immediately thought of you, at the many marvelous examples of humility and gentleness that you gave us during your pontificate.’ Benedict replied: ‘Grazie, grazie.'”

But who were the “they” who told Francis that the icon was the Madonna of Humility?

“They” were… the people who gave the icon to him. But who were those people?

Well… they were representatives of the Patriarch of the Russian Orthodox Church, who sent the icon to Pope Francis as a gift, and who handed it to Francis three days ago, on March 20.

How do I know this?

Because a few minutes ago I received an unexpected email from Metropolitan Hilarion, 46, an old friend who is also the “Foreign Minister” (the term isn’t quite accurate, but it suggests the importance of his work and position) of the Russian Orthodox Church’s Moscow Patriarchate, so, the right-hand of Patriarch Kirill. He wrote:

“Pope Francis presented to Pope emeritus Benedict the icon which had been presented to Pope Francis by Metropolitan Hilarion on behalf of Patriarch Kirill [the head of the Russian Orthodox Church] after the private audience [with the new Pope] on 20 March. Watch this video: http://www.youtube.com/watch?v=9aylAmChAaY Отправлено с iPhone [Sent from iPhone]” 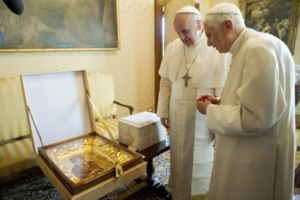 So the icon was the Russian icon Hilarion gave to Francis three days ago!

I wrote back: “Amazing. Are you pleased, or upset?”

I added: “It is reported here: ‘They spent 45 minutes talking alone. Pope Francis gave Pope Benedict an icon of Our Lady of Humility, saying that when he received it, he immediately thought of giving it to Pope Benedict.'”

Now, what does all this mean?

Well, it means that at the moment Pope Francis and Pope Benedict first met, at the first meeting ever of the “two Popes” of the Roman Catholic Church, there was a “Russian connection” and an “Orthodox connection” which was present, which was between them, joining them: an image of the Virgin Mary, the Madonna of Humility, brought from Russia and given to Pope Francis in Rome on March 20, an image which immediately struck Pope Francis when he received it as reminding him of Benedict, an image which he decided to bring with him today, to give to Emeritus Pope Benedict, on the occasion of the unprecedented, historic occasion, of their first meeting.

Others may find further elements in this bit of news to reflect upon. To me, it suggests that Mary, Mother of the Church, is watching over the Church, in these difficult and dangerous times, and acting as a mother even to these two men, Benedict and Francis, bringing them together.

I sense in this a mysterious design, yes, a mystical design, something transcending our ordinary understanding of cause and effect, a design, as I see it, for Christians, for the Christian Church, to return to greater communion, greater unity, East and West, Greek and Latin, Orthodox and Catholic — with one of the great “hinge points” being… Russia.

And the way to proceed forward toward greater Christian unity is this same way, the way of Mary, the way of humility.

In the homily at the Mass on March 19 for his installation, Pope Francis concluded with these words, asking specifically for Mary’s intercession:

“To protect Jesus with Mary, to protect the whole of creation, to protect each person, especially the poorest, to protect ourselves: this is a service that the Bishop of Rome is called to carry out, yet one to which all of us are called, so that the star of hope will shine brightly. Let us protect with love all that God has given us!

“I implore the intercession of the Virgin Mary, Saint Joseph, Saints Peter and Paul, and Saint Francis, that the Holy Spirit may accompany my ministry, and I ask all of you to pray for me! Amen.”

He will then enter into Holy Week, with a full schedule of liturgical celebrations.