Letter #62: Staying in the Domus

Letter #62: Staying in the Domus

Everyone likes a home they can be comfortable in. And the new Pope is no exception.

And he likes the Domus Santa Marta. He’s comfortable there. 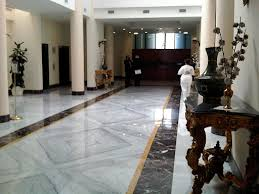 And so, for the moment, Pope Francis will not move into the grand, majestic Apostolic Palace which overlooks St. Peter’s Square, where every Pope since 1903 has lived.

This is causing a small sensation in the Vatican.

(Here, a view of the main lobby in the Domus. At the far end, where the light is shining, is the entrance. To the left is the dining hall. Behind the photographer is the chapel.)

It is another sign of Pope Francis’s simplicity. His life is coherent with his words.

Interestingly, as far as being close to the tomb of St. Peter, except for the residences in the Fabbrica

San Pietro, which is the building halfway back and on the left side of the basilica as one looks at the facade, there is no residence in Vatican City closer to St. Peter’s tomb than… the Domus.

(Here is a view of the front door of the Domus, taken from across the little piazza. Behind the photographer is St. Peter’s basilica. It is only a two-minute walk from one to the other.)

It is only a two-minute walk across the cobblestones to the back entrance of the basilica, and then in and down to the crypt, where Peter’s body was taken after he was crucified only a few steps away, probably in 64 A.D.

So Francis, for the time being, will stay in his room at the Domus Santa Marta — the House of St. Martha, the saint known for her hospitality — the sister of Mary of Bethany and of Lazarus, whom Jesus raised.

It is the one guest house in Vatican City, and the place where the cardinals stayed during the Conclave.

There Francis will have a small suite, quite comfortable, but by no means luxurious. Room 201.

(Here is a view of the new Pope’s bedroom, published before the Conclave, when no one thought it would be the room the Pope would choose to remain in.) 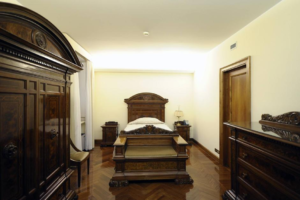 The Pope’s window has a view of the basilica dome, the lovely, silver cupola.

This is the same suite Cardinal Ratzinger used for a few days after his election in 2005, before he moved over to the Apostolic Palace. The suite where patriarchs have sometimes stayed in the past. The largest and best suite in the Domus. But nowhere near as large as the papal apartments in the Apostolic Palace are.

Francis will have a common diningroom on the first, ground floor of the Domus, where some 50 monsignors from the Vatican, who also live full-time in the Domus, take their breakfast, lunch and dinner.

And, also the same ground floor, is the chapel of the Domus, where Francis has been celebrating Mass each morning.

(Here is a view of that chapel.) 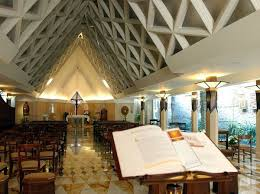 (And here is a view of that chapel with Pope Francis sitting down on the last bench. His friends have said of him that, if there is any sort of meeting, they know whether he is there by looking at the last row. That is where he always sits.) 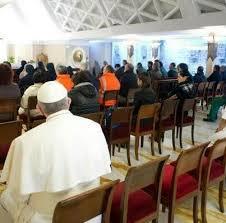 There are also several meeting rooms, and a large reception room for receiving guests.

Below that level, in the basement of the Domus, there are a couple of vending machines, for coffee and cappuccino, and there is even a small gym with weight machines and treadmills for exercising.

The Domus is spotlessly clean, and has been carefully managed, first, for nearly 10 years, by don Aldo Tolotto, and, for the past year, by Tolotto’s successor, Monsignor Battista Ricca, who is also in charge of the other two Vatican guest houses, both outside the Vatican, one behind Vatican Radio and the other on via della Scrofa, just behind the Piazza Navona.

In addition to the monsignors who live there, members of pontifical academies who have meetings in Rome (for example, members of the Pontifical Academy for Life and the Pontifical Academy of Sciences), can also reside for a few days in the Domus. Other visitors have occasionally been permitted to stay there, and I too have had the great privilege of staying in the Domus on occasion.

It is not known how this decision of Francis to stay in the Domus may affect the operations of the Vatican security force, or if any changes will have to be made to the traffic flow from the nearby side gate of the Vatican.

It is interesting to note that it is only a few minutes walk from the front door of the Domus up into the Vatican Gardens. On an afternoon stroll, then, Pope Francis could, conceivably, walk up into the gardens and in just a few minutes arrive… at the convent where Emeritus Pope Benedict XVI will be staying, beginning in May. 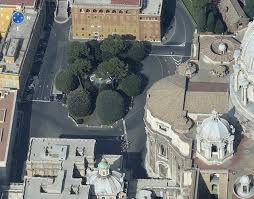 (Here is an aerial view of the square in front of the Domus. The Domus is the building with the red roof on the lower left. The trees surround a little fountain in the center of the square. The massive building on the right is St,. Peter’s Basilica; you can just see part of the dome, the white part on the far right. The white building in the middle at the bottom is the Fabbrica San Pietro. The yellow building at the top is where the Vatican security has its headquarters, and where the Pope’s butler, Paolo Gabriele, was held in a cell for many weeks. Off to the top right are the Vatican Gardens where Emeritus Pope Benedict will be living, hidden from the world, in a small convent. It is about 15-minute walk from the Domus.)

Here below is a good report from Catholic News Service’s Cindy Wooden which contains additions details:

Pope Francis to live in Vatican guesthouse, not papal apartments

VATICAN CITY (CNS) — Pope Francis has decided not to move into the papal apartments in the Apostolic Palace, but to live in a suite in the Vatican guesthouse where he has been since the beginning of the conclave that elected him, said Jesuit Father Federico Lombardi, Vatican spokesman.

“He is experimenting with this type of living arrangement, which is simple,” but allows him “to live in community with others,” both the permanent residents — priests and bishops who work at the Vatican — as well as guests coming to the Vatican for meetings and conferences, Father Lombardi said March 26.

The spokesman said Pope Francis has moved out of the room he drew by lot before the conclave and into Suite 201, a room that has slightly more elegant furnishings and a larger living room where he can receive guests.

The Domus Sanctae Marthae, the official name of the guesthouse, was built in 1996 specifically to house cardinals during a conclave.

Celebrating Mass March 26 with the residents and guests, Pope Francis told them he intended to stay, Father Lombardi said. The permanent residents, who had to move out during the conclave, had just returned to their old rooms.

Pope Francis has been there since his election March 13, taking his meals in the common dining room downstairs and celebrating a 7 a.m. Mass with Vatican employees in the main chapel of the residence.

He will be the first pope in 110 years not to live in the papal apartments on the third floor of the Apostolic Palace.

In 1903, St. Pius X became the first pope to live in the apartments overlooking St. Peter’s Square. The apartments were completely remodeled by Pope Paul VI in 1964 and have undergone smaller modifications by each pope since, according to “Mondo Vaticano,” a Vatican-published mini-encyclopedia about Vatican buildings, offices and tradition.

The large living room or salon of the [Apostolic Palace] apartment is located directly above the papal library where official audiences with visiting bishops and heads of state are held.

Pope Francis will continue to use the library for official audiences and to recite the Angelus prayer on Sundays and holy days from the apartment window overlooking St. Peter’s Square, Father Lombardi said.

The apartments contain a chapel, an office for the pope and a separate office for his secretaries, the pope’s bedroom, a dining room, kitchen and rooms for two secretaries and for the household staff.

When Pope Francis returned to the guesthouse after his election, Father Lombardi had said the move was intended to be short-term while a few small work projects were completed in the papal apartments. He said March 26 that all the work had been completed, but at least for the foreseeable future, Pope Francis would not move in.

The Domus Sanctae Marthae, named after St. Martha, is a five-story building on the edge of Vatican City.

While offering relative comfort, the residence is not a luxury hotel. The building has 105 two-room suites and 26 singles; about half of the rooms are occupied by the permanent residents. Each suite has a sitting room with a desk, three chairs, a cabinet and large closet; a bedroom with dresser, night table and clothes stand; and a private bathroom with a shower.

The rooms all have telephones and access to an international satellite television system.

The building also has a large meeting room and a variety of small sitting rooms. In addition to the dining room and the main chapel, it also has four private chapels, located at the end of hallways on the third and fifth floors of each of the building’s two wings.

VATICAN CITY (CNS) — The Vatican confirmed Pope Francis will lead a full slate of Holy Week and Easter liturgies in Rome and at the Vatican, keeping pace with a usually busy papal schedule.

The Vatican republished the Pope’s program March 25, updating a schedule they had released January 29. The only major changes were the name of the pontiff presiding over the ceremonies and the new pope’s recent decision to celebrate the Holy Thursday Mass of the Lord’s Supper in a Rome juvenile detention facility rather than in St. Peter’s Basilica.

The updated schedule starts with Pope Francis’ celebration of a morning chrism Mass in St. Peter’s Basilica on Holy Thursday. That evening, he will preside over the Mass of the Lord’s Supper in Rome’s Casal del Marmo Prison for minors where he will wash the feet of some of the young detainees.

On Good Friday, he will celebrate the liturgy of the Lord’s Passion in St. Peter’s Basilica in the late afternoon, and then will lead a nighttime Way of the Cross at Rome’s Colosseum.

The meditations to be read during the Way of the Cross were written by Lebanese Catholic youths. Retired Pope Benedict XVI had asked Lebanon’s Maronite Patriarch Bechara Rai to choose the youths and guide their preparation of the texts. The retired pope’s request was meant to recall his 2012 visit to Lebanon and invite the whole church to pray for the Middle East — its tensions and its beleaguered Christian community.

On Holy Saturday, Pope Francis will preside over the Easter Vigil in St. Peter’s Basilica.

On Easter, March 31, he will celebrate Mass in St. Peter’s Square and give his blessing “urbi et orbi” (to the city of Rome and the world).