Truth does not become more true by virtue of the fact that the entire world agrees with it, nor less so even if the whole world disagrees with it. —Maimonides

The Archbishop of Assisi is in New York City this week to visit the Museum of Memory to highlight the lifesaving efforts made by the Church in Italy during the Holocaust.

I strongly encourage you to consider registering for this week’s virtual and actual events in New York City highlighting the Bishop of Assisi, Domenico Sorrentino and the heroic people of Assisi who, during the Second World War, helped keep any Jewish families safe from arrest and round-up. Here is a link to register (link). 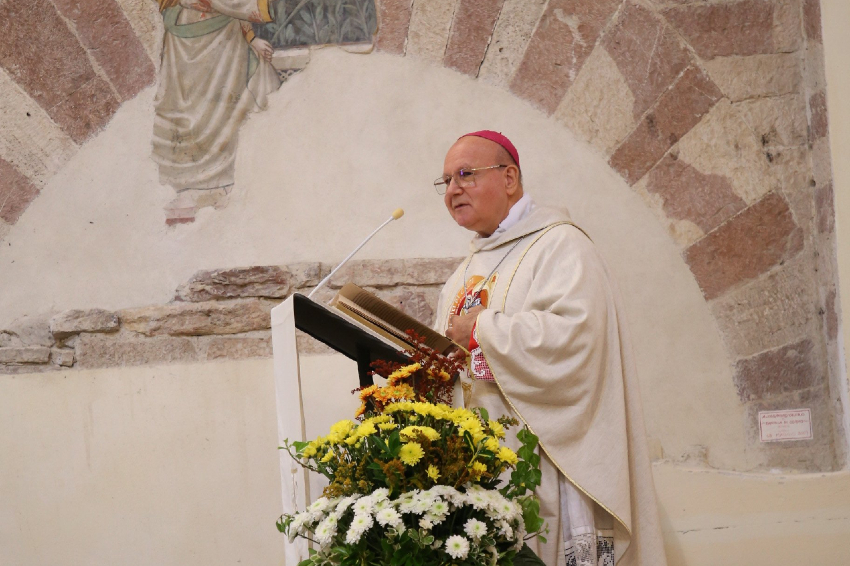 WANTAGH, N.Y., Jan. 31, 2022 /PRNewswire/ — Pave the Way Foundation (PTWF), whose mission is to initiate historical projects and remove obstacles between religions, is sponsoring an historic presentation in New York with the Diocese of Assisi, Italy, recognizing the lifesaving actions taken by clergy and citizens of Assisi in protecting Jewish refugees during the Holocaust.

With Northern Italy occupied by German troops in 1943, the historic town of Assisi, home of Saint Francis of Assisi, found itself thrown into the atrocities of war. Archbishop Nicolini, acting on requests from Rome, rallied Assisi’s citizens and clergy to come together and save the lives of their Jewish brethren, being hunted down by the Nazis.

Elliot Hershberg, Pave the Way Foundation Chairman, remarked “at a time in history when forces around the world would strive to divide rather than unite, we are reminded by this exhibit of the historic, lifesaving acts of conscience Roman Catholics performed, at their own peril, to help and save so many Jewish victims of Nazi barbarism.”

The exhibit features panels from the “Museo della Memoria Assisi” (The Museum of Memory) and includes a roundtable discussion led by Professor Johan Ickx, Archivist for the Historical Archives of the Vatican Secretary of State, and Elizabeth Bettina, author of “It Happened in Italy.” Also attending: Archbishop of Assisi, Domenico Sorrentino; Monsignor Anthony Figueiredo; and the Mayor of Assisi, Stefania Proietti.

“How happy we are to bring our museum to America,” Archbishop Sorrentino notes. “Not only to remember a light that shone through a dark time in history, but also to tell the world that good can and must win over evil. Like the Jews, too many people are stripped of their dignity as human beings. St. Francis stripped himself to be a universal brother. In his footsteps, we welcome the initiative of Gary Krupp, his Chairman and Board and thank all of our gracious hosts who help us ‘pave the way’ together to witness fraternity and peace.”

The museum’s founder and curator, Marina Rosati, also attending, looks forward to, “this important opportunity to make known the extraordinary history of Assisi in the dark period of the Holocaust. Some 300 Jews were welcomed and saved, not one was deported or killed. Yad Vashem has recognized 7 of the heroes of Assisi as Righteous Among Nations.”

Two events are planned: April 5, 2022, at Temple Israel in New Rochelle, and April 6 at St. John’s University in Queens. Rabbi Jay Rosenbaum and Temple Israel stated “We are honored to host The Assisi Museum Exhibit, and excited to lead the roundtable discussion. The congregation of Temple Israel and I welcome this unique opportunity to fulfill the Mitzvah of Zachor, remembrance of the Shoah in a world seemingly filled with moral amnesia. With this exhibit, we not only memorialize the 6,000,000 Jews who were murdered by the Nazis, but the righteous of Assisi who risked everything to save innocent Jewish lives. May their souls be bound up in the bond of eternal life, as we honor them through this project of reconciliation and hope with the light of love.”

“It is a privilege and honor to welcome the Assisi Museum of Memory Exhibit to St. John’s,” commented Joseph Sciame, Vice-President for Community Relations at St. John’s University. “By doing so, we honor the memory of so many who afforded our Jewish sisters and brothers in those dark days in Italy, what one might call ‘the gift of life’ from the citizenry in that area, as well as so many other communities in Italy at that time.”

All welcome. Jewish and Christian communities are encouraged to attend. Please register for the in-person event or the webcast at [email protected].

About Pave the Way Foundation

PTWF operates in 19 countries around the globe as a nonsectarian organization, whose mission is to identify and work to resolve non-theological obstacles between religions. We achieve our historic successes by establishing foundations of trust through cultural, educational, and technological gestures between the faiths from behind the scenes. Please visit our website www.ptwf.org.