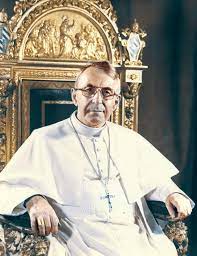 Pope John Paul I (Pope for 33 days in the fall of 1978, just before John Paul II was elected). A new book by American priest Fr. Charles Murr offers new information on the situation of the papacy in 1978

What was the situation of the papacy, and therefore also of the Catholic Church, in 1978, when Pope John Paul I was elected Pope in August after the death of Pope Paul VI on August 6?

And how does that situation help us to understand better the 33-day pontificate of John Paul I, which ended with his mysterious death on September 28, 1978?

A new book (link) by Fr. Charles Murr, a close associate of the late Canadian Cardinal Edouard Gagnon — and an old friend of Inside the Vatican magazine — offers new insight into these matters, and is therefore an important book for all thoughtful Catholics to read and assess.

Here is a link to a review of the book on the Rorate Caeli website, followed by readers’ comments, including my own comment.

The text of the review appears below. —RM

In Catholic discourse today, one notices two extremes when the question of Freemasonry and its (past or present) penetration into the Church hierarchy is raised.

Others, reacting against this excess, dismiss the whole idea as nuttery, as a “conspiracy theory” that has no basis in reality.

Both extremes suffer from the defect of being impatient, unhistorical, and unphilosophical.

A patient examination of the evidence will indicate that, indeed, some infiltration did occur; as Roberto de Mattei says, history is full of real conspiracies that historians can and do find out about through their research.

A truly historical attitude investigates all the evidence rather than prematurely foreclosing the possibilities on account of assumptions, prejudice, or discomfort. A philosophical spirit is courageous about looking into all causes, great and small, certain, probable, and possible.

It may also be germane to point out that we have 250 years of repeated condemnation of Freemasonry by the Roman Pontiffs, who are generally considered to be well-informed about what’s going on behind the scenes (whether or not they make good decisions in response to what they know). If they take the matter seriously, shouldn’t we too? (For documentation, see my article “Freemasonry and Catholicism: Implacable Enemies.”)

I therefore welcome the release of a most important book, the memoirs by Fr. Charles Theodore Murr, personal secretary of Cardinal Edouard Gagnon during the latter’s detailed 1970s investigation—commanded by Paul VI—of Freemasonry in the Vatican.

As anyone who reads the book will be able to see, we are dealing here with a calm, balanced, and careful author who tells us what he saw and heard, based on his extensive notes from the period; who does not extrapolate or magnify (or minimize), but reports with accuracy.

The book offers us by far the most detail we have ever had about what Cardinal Gagnon discovered and put into his official report—a report that was read by at least three popes and yet has been deposited deep in the Vatican archives, never released, and (seemingly) never acted upon. And yes, Annibale Bugnini comes up in the narrative: the fuller picture we get is important for the historical record and for the ongoing evaluation of the work of his hands. (As to why we should care, see “Does It Really Matter if Bugnini Was a You-Know-What?”)

Fr. Murr’s name may be familiar to some readers from his delightful (and also quite revealing) memoirs about his decades-long friendship with Madre Pascalina, Pius XII’s secretary: The Godmother: Madre Pascalina, a Feminine Tour de Force. Readers may also recall that Rorate reprinted two interviews with Fr. Murr from Inside the Vatican:

This new book contains the full account of the matters that were only summarized in those interviews. When the text was sent to me, I considered it so well done that I gladly gave it my endorsement, along with the others who blurbed it on the back cover, as seen below.

There was one man who knew the answers to these and many other questions plaguing the post-Conciliar Church. In 1975, then Archbishop Edouard Gagnon was personally commissioned by Pope Paul VI to investigate the Vatican’s Roman Curia. This thorough investigation concluded in 1978, the “year of the three Popes.”