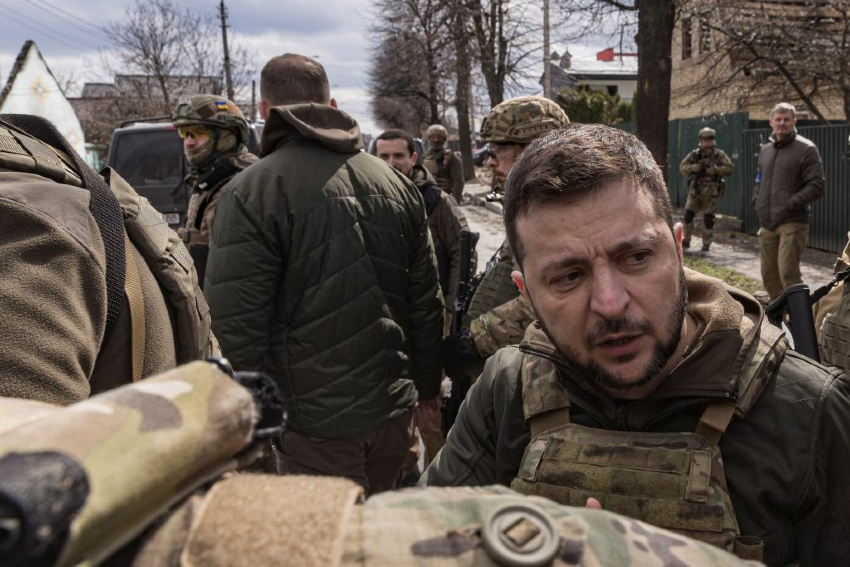 Ukraine’s President Volodymyr Zelensky in Bucha, Ukraine, a village a few miles to the west of the nation’s capital, to view dead bodies lying in the streets of the village. “This is genocide,” Zelensky told Face the Nation on CBS on Sunday, April 3. “Mothers of Russians should see this. See what bastards you’ve raised. Murderers, looters, butchers,” he added on Telegram. And yet, a full, in-depth investigation of the incident has not been made.

“The Bucha incident is a critical moment in the war. An impartial investigation is warranted, which probably only the U.N. could conduct. The Azov Battalion may have perpetrated revenge killings against Russian collaborators, or the Russians carried out this massacre. (Once again the Pentagon is dampening the war hysteria, saying it can’t confirm or deny Russia was responsible.) A rush to judgment is dangerous, with irresponsible talk of the U.S. directly fighting Russia. But it is a rush to judgment that we are getting.” —Journalist Joe Lauria, in an article on April 4, two days ago, for Consortium News, where he is an editor. Joe Lauria is a veteran foreign-affairs journalist based at the U.N. since 1990. He has written for the Boston Globe, the London Daily Telegraph, the Johannesburg Star, the Montreal Gazette, the Wall Street Journal and other newspapers. He can be reached at[email protected]  and followed on Twitter at @unjoe.

The terrible recent killings in Bucha, Ukraine — where an estimated 300 civilians, according to some accounts, were buried in common graves or left sprawled on the village’s streets — are now universally attributed to the Russian soldiers who occupied the village near Kiev for several weeks, and then withdrew on March 30, exactly one week ago.

U.S. President Joe Biden has stated that the killings are war crimes committed by the Russian soldiers, and that Russia must be punished for the crimes.

And yet, the Russian government has publicly, repeatedly denied that the Russian soldiers are responsible, and it has called for a full, impartial investigation of what happened in Bucha.

Now journalist Joe Lauria has written an article (text below), also calling for a full investigation.

What Lauria is arguing is that this incident in Bucha, which has so shocked and infuriated the world that many are now calling for a much expanded war, with the entrance of U.S. and other NATO troops into Ukraine to join the battle — likely triggering an escalation that could spread the war beyond Ukraine — should be carefully investigated, despite the horror of what happened… in fact, precisely because of the horror of what happened.

He, and others, argue that many significant facts are not known because there have been no autopsies on the victims. It is not known what the likely time of death was, or what bullets were used in the killings, or who were the victims.

With the potential for a Third World War looming larger each day, a full investigation of the killings in Bucha seems something all sides should support. —RM

The West has made a snap judgment about who is responsible for the massacre at the Ukrainian town of Bucha with calls for more stringent sanctions on Russia, but the question of guilt is far from decided, writes Joe Lauria.

Within hours of news Sunday [April 3] that there had been a massacre at Bucha, a town 63 kms north of the Ukrainian capital, the verdict was in: Russian troops had senselessly slaughtered hundreds of innocent civilians as they withdrew from the town, leaving their bodies littering the streets.

Unlike their judicial systems, when it comes to war, Western nations dispense with the need for investigations and evidence and pronounce guilt based on political motives: Russia is guilty. Case closed.

Except the case hasn’t even been opened yet and the sentence is already being proposed. French President Emmanuel Macron, for instance, has called for Russian coal and oil to be banned from Europe. “There are very clear indications of war crimes,” he said on France Inter radio Monday. “What happened in Bucha demands a new round of sanctions and very clear measures, so we will co-ordinate with our European partners, especially with Germany.”

Other voices are now perilously calling for the U.S. to go to war with Russia over the incident.

“This is genocide,” Ukrainian President Volodymyr Zelensky told Face the Nation on CBS. “Mothers of Russians should see this. See what bastards you’ve raised. Murderers, looters, butchers,” he added on Telegram.

Russia has categorically denied it had anything to do with the massacre.

If there were to be a serious probe, one of the first places an investigator would begin is to map out a timeline of events.

This was confirmed on Thursday by a smiling Anatolii Fedoruk, the mayor of Bucha, in a video on the Bucha City Council official Facebook page. The translated post accompanying the video says:

“March 31 – the day of the liberation of Bucha. This was announced by Bucha Mayor Anatolii Fedoruk. This day will go down in the glorious history of Bucha and the entire Bucha community as a day of liberation by the Armed Forces of Ukraine from the Russian occupiers.”

All of the Russian troops are gone and yet there is no mention of a massacre. The beaming Fedoruk says it is a “glorious day” in the history of Bucha, which would hardly be the case if hundreds of dead civilians littered the streets around Fedoruk.

“Russian Defence Ministry denied accusations by the Kiev regime of the alleged killing of civilians in Bucha, Kiev Region. Evidence of crimes in Bucha appeared only on the fourth day after the Security Service of Ukraine and representatives of Ukrainian media arrived in the town. All Russian units completely withdrew from Bucha on March 30, and ‘not a single local resident was injured’ during the time when Bucha was under the control of Russian troops,” the Russian MOD said in a post on Telegram.

What happened then on Friday and Saturday? [April 1 and April 2]

As pointed out in a piece by Jason Michael McCann on Standpoint Zero, The New York Times was in Bucha on Saturday and did not report a massacre. Instead, the Times said the withdrawal was completed on Saturday, two days after the mayor said it was, and that the Russians left “behind them dead soldiers and burned vehicles, according to witnesses, Ukrainian officials, satellite images and military analysts.”

The Times said reporters found the bodies of six civilians. “It was unclear under what circumstances they had died, but the discarded packaging of a Russian military ration was lying beside one man who had been shot in the head,” the paper said.

It then quoted a Zelensky adviser, who said:

“The bodies of people with tied hands, who were shot dead by soldiers lie in the streets,’ the adviser, Mykhailo Podolyak, said on Twitter. ‘These people were not in the military. They had no weapons. They posed no threat.’ He included an image of a scene, photographed by Agence France-Presse, showing three bodies on the side of a road, one with hands apparently tied behind the back. The New York Times was unable to independently verify Mr. Podolyak’s claim the people had been executed.”

It is possible that on Saturday the full extent of the horror had yet to emerge, and that even the mayor was unaware of it two days before, though photos now show many of the bodies out in the open on the streets of the town, something that presumably would be difficult to miss.

In Bucha, the Times was close to the neo-Nazi Azov Battalion, whose soldiers appear in the newspaper’s photographs.

In his piece, McCann suggests that Azov may responsible for the killings:

“Something very interesting then happens on [Saturday] 2 April, hours before a massacre is brought to the attention of the national and international media. The US and EU-funded Gorshenin Institute online [Ukrainian language] site Left Bank announced that:

“‘Special forces have begun a clearing operation in the city of Bucha in the Kyiv region, which has been liberated by the Armed Forces of Ukraine. The city is being cleared from saboteurs and accomplices of Russian forces.’

“The Russian military has by now completely left the city, so this sounds for all the world like reprisals. The state authorities would be going through the city searching for ‘saboteurs’ and ‘accomplices of Russian forces.’ Only the day before [Friday], Ekaterina Ukraintsiva, representing the town council authority, appeared on an information video on the Bucha Live Telegram page wearing military fatigues and seated in front of a Ukrainian flag to announce ‘the cleansing of the city.’ She informed residents that the arrival of the Azov battalion did not mean that liberation was complete (but it was, the Russians had fully withdrawn), and that a ‘complete sweep’ had to be performed.”

Ukraintsiva was speaking a day after the mayor had said the town was liberated.

By Sunday morning, the world learned of the massacre of hundreds of people. U.S. Secretary of State Antony Blinken said: “We strongly condemn apparent atrocities by Kremlin forces in Bucha and across Ukraine. We are pursuing accountability using every tool available, documenting and sharing information to hold accountable those responsible.” President Joe Biden on Monday called for a “war crimes” trial. “This guy is brutal, and what’s happening in Bucha is outrageous, and everyone’s seen it. I think it’s a war crime.”

The Bucha incident is a critical moment in the war. An impartial investigation is warranted, which probably only the U.N. could conduct. The Azov Battalion may have perpetrated revenge killings against Russian collaborators, or the Russians carried out this massacre. (Once again the Pentagon is dampening the war hysteria, saying it can’t confirm or deny Russia was responsible.)

[Update: Satellite images, published after this article appeared by The New York Times, purportedly showing bodies strewn on a street in mid-March, should be considered by an impartial investigation. It cannot be considered at this point as conclusive evidence.]

Joe Lauria is editor-in-chief of Consortium News and a former U.N. correspondent for The Wall Street Journal, Boston Globe, and numerous other newspapers, including The Montreal Gazette and The Star of Johannesburg. He was an investigative reporter for the Sunday Times of London, a financial reporter for Bloomberg News and began his professional work as a 19-year old stringer for The New York Times.  He can be reached at [email protected] and followed on Twitter @unjoe