The information this morning about the health of Cardinal Raymond Leo Burke is a matter of great concern.

The cardinal remains in very grave condition in a hospital in Minnesota.

And here is an official communique from two days ago from the Shrine of Our Lady of Guadalupe in La Crosse, Wisconsin — a shrine Cardinal Burke founded, and a shrine which has been asked by Burke’s family to send out official communications on his condition:

Peace I leave with you; my peace I give to you; not as the world gives do I give to you. Let not your hearts be troubled, neither let them be afraid. (Jn 14:27)

The outpouring of love, prayers and support during His Eminence’s hospitalization has greatly consoled his family, edified those who serve him at the Shrine and elsewhere, and testified to the character and virtue of the man whom so many consider a spiritual father. We deeply and abundantly appreciate this charity, and we give praise and thanks to our Heavenly Father, especially for the brilliant and faithful service of Cardinal Burke to the Church he loves so profoundly.

As of August 17th, His Eminence remains in serious, but stable condition. His family, who with a team of doctors, is responsible for all medical decisions while the Cardinal remains sedated and on a medical ventilator, has great confidence in the care he is receiving.    The Cardinal has received the Sacraments from priests nearby to him. There are several relics in his room.

While the Cardinal’s family appreciates the good intentions of those who have suggested treatments, consultations, etc., they ask that people refrain from sending anything further. They also ask that you not contact them, members of the Shrine staff, or the Cardinal’s residence in Rome to discuss his condition. Texts, phone calls and emails—while certainly solicitous and often gracious—can, inadvertently, become a burden. The family does not plan to disclose His Eminence’s location to avoid the obvious difficulties that might cause.

To provide a secure source for updates about the Cardinal’s health, the family has asked that the Shrine of Our Lady of Guadalupe—in addition to the Cardinal’s personal media—be the only authorized platforms for accurate, timely information. Other reports may be incomplete or false and so may unnecessarily disturb the minds and hearts of those devoted to His Eminence.

The Cardinal’s family has also requested that only updates of significant changes in His Eminence’s condition be posted on the authorized platforms. In humility, we understand that it is not necessary for us to know every detail of the Cardinal’s treatment. Though his family realizes that the Cardinal “belongs” to the Church, they also ask that we respect his privacy. The period of hospitalization, and for now isolation because of the COVID virus, may be prolonged as His Eminence’s body fights the infection and recovers strength. For the time being, the sedation assists his own peace and rest.

Nothing falls outside of God’s providence. Nothing falls outside the reach of His grace. These are spiritual truths we know and that the Cardinal has taught us by his own example of fidelity in trust and surrender to the Good God. Confidence in these truths opens us to the peace the world cannot give or take. Were he able to speak with us now, he would tell what he has always taught us: that Our Father in Heaven is good, merciful, just, provident and sovereign; that we are His beloved children and that He will never leave us orphans; that we should not be afraid of the Cross as the way to eternal life; that the Sacraments are the most direct channels of grace and that we do the soul the greatest good by receiving Holy Communion often and by going to Confession regularly; that we should say our daily prayers; and that we should love one another as Jesus Christ has loved us: generously, even to the point of heroic sacrifice.

And one more thing so important and so dear to His Eminence: that we should pray the Rosary frequently and fervently, and so place ourselves under the mantle of Our Lady, confident in her maternal love and intercession.

Please continue your prayers for Cardinal Burke and for his family, particularly at the Holy Mass and in the praying of the Rosary. We are filled with gratitude for the abundance of prayers and love for this faithful son and servant of the Church.

Shrine of Our Lady of Guadalupe

So Cardinal Burke is in very grave condition, and is in need of our prayers.

Meanwhile, Taliban fighters have violently suppressed the first protest against their rule. It occurred early Wednesday in Jalalabad; protesters took down the Taliban flag and replaced it with the flag of the Afghan Republic. The Taliban fighters responded by firing into the crowd. At least two were killed, and nearly a dozen were wounded by the gunfire.

Taliban soldiers did fire to disperse the crowds in Jalalabad city. There are repairs or injuries. pic.twitter.com/8ABTmuaind

This is Asadabad , city the capital of Kunar province. pic.twitter.com/HSohtXK00h

At any rate, with the US troop presence expected to climb to 7,000 in the coming days, while other NATO partners — including Germany — send a few hundred additional troops to aid with the pull out — civilian and military flights have re-started, with more than 700 people moved out in a matter of 24 hours as of early Wednesday in New York.

As the House prepares to hold hearings on the Afghan pullout, lawmakers from both parties are urging President Biden to do what he can to ensure American troops remain on the ground long enough to finish evacuating all American citizens and Afghan allies with travel visas.

It’s now well known that ex-Afghan President Ashraf Ghani had fled his country on Sunday while claiming it would “avert bloodshed.” His rapid exit, initially said to have been toward Tajikistan, ensured the lighting fast Taliban takeover of Kabul — also as the Pentagon scrambled to initiate the still ongoing evacuation of US diplomats and all American citizens.

On Monday it emerged via Russian embassy eyewitnesses and reports that Ghani had stuffed multiple cars and a helicopter full of cash upon departure, even leaving some of it on the airport tarmac as not all of it could be physically carried, apparently. It’s now emerging that he and his aides may have escaped with a whopping $169 million, according to new statements from the Afghan ambassador in Tajikistan, as reported in BBC. 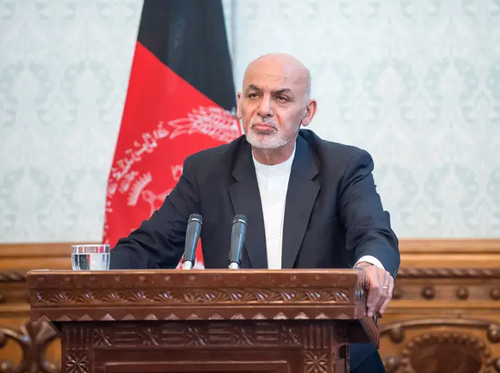 Further the United Arab Emirates is now confirming that he’s reappeared in the UAE. “The UAE Ministry of Foreign Affairs and International Cooperation can confirm that the UAE has welcomed President Ashraf Ghani and his family into the country on humanitarian grounds,” according to a Wednesday foreign ministry statement.

Since he fled Sunday, there had been no official word on his whereabouts, though previously there was speculation that Tajikistan may have denied him entry, which may have initially diverted Ghani to Oman.

Ghani has a lot to answer for: not only did he loot Afghanistan’s coffers (and the US taxpayer by extensions), but his fleeing may have collapsed a major transitional or possible “power sharing” deal that was in the works, which perhaps would have also avoided the horrific scenes from Kabul international airport on Monday that resulted in at least seven deaths.

New: Afghan ambassador in Tajikistan says President Ashraf Ghani escaped with $169m worth of cash in bags before Kabul fell to the Taliban, BBC reports.

Bloomberg earlier in the week reported on the potential deal that was in progress in Doha:

Among those efforts was a tantalizing agreement that could have guaranteed calm. Afghan and Taliban negotiators tentatively reached a deal in which all sides would declare a two-week cease-fire in exchange for President Ashraf Ghani’s resignation and the start of talks on setting up a transitional government, according to two people familiar with the matter, who asked not to be identified discussing private deliberations.

But the efforts collapsed as soon as reports emerged that he fled Sunday, according to Bloomberg.

Note to readers: The following is a request to readers for support for our own initiative to help Christians in the Middle East. I believe this has the chance to become an important effort, but it requires some financial support to develop and accomplish its mission —Robert Moynihan

The people of Beirut and all of Lebanon are in need of our assistance.

We have spoken with our friends, the Maronite Monks, about how we can help.

You can make a tax deductible donation here.

These donations are restricted to our “Friends of Lebanon” project. These funds are used to develop a precise and effective way to carry out to 2 goals:

1) Short Term Help: to assist those who need immediate assistance – daily needs like food and water, electricity and other essential household items.

2) Long Term Hope: to support projects which will help those most in need to become stable, to become self reliant, to receive education and to stay in Lebanon.

As a donor, you will have an opportunity to join the conversation on a monthly virtual video calls with those who are on the ground in Lebanon, helping those in need.