At 5 p.m. yesterday, November 12, Svetlana Kasyan, the young Russian opera star, was a bit worried. “My throat is a little sore,” she said. “I think I may have a slight fever.” 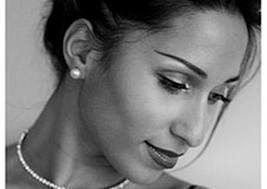 But the young woman went forward despite these obstacles and at 9 p.m.appeared on stage in the Auditorium Conciliazione on via della Conciliazione as the soloist in a magnificent “Concert for Peace” in honor of Pope Francis, who called for a day of prayer and fasting for peace on September 7.

She sang brilliantly, filling the hall with her powerful, expressive voice. (We are preapring a CD and DVD of the concert.)

When the concert was over, the approximately 1,000 in attendance erupted in long applause. Svetlana, who received several large bouquets of flowers, smiled, and agreed to sing an additional piece as an encore.

Prior to the concert, the three men, along with several others in their entourage, met for 20 minutes in a small reception room by the theater entrance

During the concert, Cardinal Ravasi and Cardinal Koch sat on either side of the Russian Orthodox Metropolitan, Hilarion Alfeyev, in the front row.

These meetings came after a meeting earlier yesterday between Pope Francis and Hilarion, aided by his interpreter from Russian into Spanish, Miguel Palacio (photo below).

Also in attendance at the concert was one of the two personal secretaries of Pope Francis, don Fabian Pedacchio.

He brought a gift for Svetlana in an envelope sealed with the papal seal, sent by Pope Francis himself: two rosaries in small square cases.

Today, before Sevtlana left from Rome for Moscow at about 9 a.m., she was invited to be present during the 7 a.m. morning Mass celebrated by Pope Francis in the Domus Santa Marta (where she has been staying).

And after Mass, she said had been able to speak with Pope Francis for a few moments. 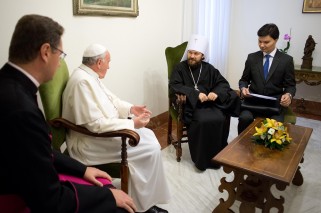 “Yes, he gave me his blessing,” Svetlana told me. “He blessed my voice and told me to use it to give glory to God. Our meeting deeply moved me. I am at a loss for words. I cannot easily describe how I felt. I admire and love him very much. He is so very simple and genuine and I am so grateful to have met him.”

Moments later, she was in a taxi and on her way to the airport.

A diplomat serving in Rome who attended the concert wrote to me today in an email: “Congratulations again on the wonderful concert last night. I hope you were pleased and that Metropolitan Hilarion enjoyed the program and particularly the presentation of his own compositions. He certainly seemed to when I spoke to him last night. The whole Russian presence in Rome has added momentum toward your objective of closer relations between the two Churches. It is significant that Cardinal Koch and Bishop Farrell were both present after having only recently returned from Korea, where they were at the World Council of Churches meeting with Hilarion.”

“It was a wonderful concert,” said Natalia Tsarkova, a Russian painter who lives in Rome and has painted portraits of the last three Popes. She attended the concert last night. “It was a lovely, very special event. Truly memorable. Svetlana has a beautiful voice.”

Born in Georgia, in the Caucusus, Svetlana lost her father as a young child, and with what remained of her family, found refuge in Kazakhstan. There she began to study music and singing. She then found her way to Moscow, and eventually, after long years of study, became a soloist with the Bolshoi Theater.

This afternoon, there was a funeral Mass in St. Peter’s Basilica for Cardinal Domenico Bartolucci, who died on November 11 at the age of 96. 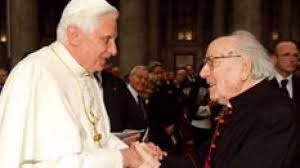 Domenico Bartolucci with Pope Benedict, who made Bartolucci a cardinal in 2010 when he was 93

Bartolucci had been the Maestro of the Sistine Chapel Choir, which sings for liturgies in St. Peter’s Basilica, for many years.

The funeral Mass was celebrated by Cardinal Angelo Sodano in the Chapel of the Chair of St. Peter in the back of the basilica under the window showing the descent of the Holy Spirit.

Pope Francis entered the basilica at the end of the Mass, to preside over the final part of the funeral ceremony.

Bartolucci was a splendid composer and conductor, a world-renowned expert in the music of Palestrina. He has now left us, but he leaves behind an example we can learn from: music can be a means to help to bring human beings together and prepare them for mutual understanding — a presupposition for any lasting peace.

May eternal light shine upon him.