Pope Francis and His Devotion to Mary

Pope Francis and His Devotion to Mary

On Saturday, May 4th, Pope Francis visited St. Mary Major, the biggest church in Rome dedicated to the Blessed Virgin, for the second time. He was received by a friend of his, the Spanish Cardinal Santos Abril y Castelló, archpriest of the Papal Basilica of St. Mary Major.

Indicated as one of the main supporters of Cardinal Bergoglio during the conclave, Cardinal Abril y Castelló got to know the future Pope very well when serving as apostolic nuncio to Argentina.

It must be remembered that the day after his election the new Pope paid a private visit to the papal basilica located on the Esquiline Hill, to pray and pay tribute to the icon of Mary Salus Populi Romani (Protectress of the Roman People) venerated not only in Rome, but throughout the Catholic world.

On his first public appearance a few hours after his election, Pope Francis manifested his Marian devotion, which he confirmed the subsequent days of his pontificate.

“He decided to visit the Basilica, not only to thank the Blessed Virgin, but — as Pope Francis said to me himself — to entrust Her with his pontificate, to lay it at Her feet. Being deeply devoted to Mary, Pope Francis came here to ask Her for help and protection,” said Cardinal Abril y Castelló at Vatican Radio, referring to papal visit of March 14th.

As early as his first appearance on the Loggia of Blessings the evening of his election, Pope Francis turned out to be in line with his predecessors, showing a strong Marian devotion. 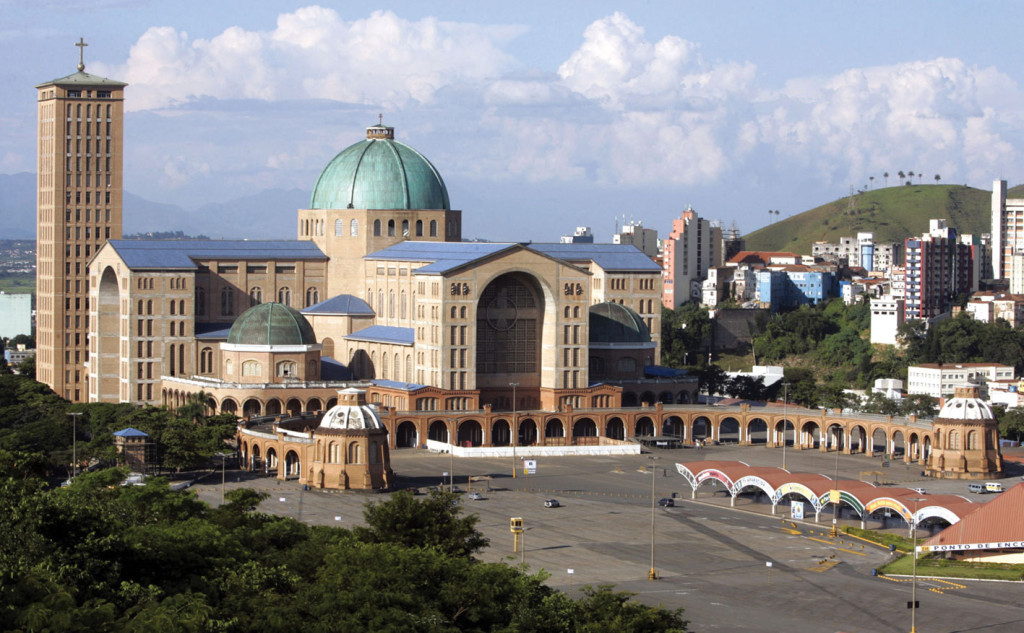 Basilica of the National Shrine of Our Lady of Aparecida, Brazil (CNS photo)

In fact, after saying the three prayers, among which was the Hail Mary, and giving the Urbi et Orbi blessing (i.e. blessing to the City of Rome and the world), the newly elected Pope greeted the faithful and anticipated his plan for the following day by simply saying: “Tomorrow I wish to go and pray to Our Lady that She may watch over the City of Rome.”

In addition, among his first words was a request to the Virgin Mary to intercede for “our Bishop Emeritus Benedict XVI.”

Then, forty days after his election, Pope Francis went to St. Mary Major again to lead the recitation of the Rosary the first Saturday of May, the month dedicated to the Blessed Virgin, and to take official possession of the Basilica as he had done for the Basilicas of St. John Lateran (April 7th) and St. Paul Outside the Walls (April 14th).

“Mary is the mother,” said the Pope during the recitation of the Rosary, “and a mother’s main concern is the health of her children … Our Lady guards our health … helps us grow, face life and be free.”

Even in his first meeting with the cardinals in the Clementine Hall on March 15th, Pope Francis stressed his link with Mary and the role he ascribes to Jesus’ Mother. He said: “I entrust my ministry and your ministry to the powerful intercession of Mary, our Mother, Mother of the Church. Under Her maternal gaze may each one of you walk happy and docile on your path, listening to the voice of Her divine Son, strengthening your unity, persevering in your common prayer and bearing witness to the true faith in the constant presence of the Lord.”

During the second Angelus of his pontificate on Palm Sunday, the Holy Father showed his deep Marian devotion once again by invoking the intercession of the Blessed Virgin “to accompany us during Holy Week.”

Those who have known former Cardinal Bergoglio for a long time understand well that his Marian devotion, far from being a recent manifestation, is a long-established devotion.

Father José Daniel Blanchoud, rector of the Shrine of Our Lady of Lujàn, the patron saint of Argentina, related his experience in an interview with Vatican Radio. “When he was cardinal in Buenos Aires, he used to come to the shrine and stay there to receive young pilgrims on weekends,” said Father Blanchoud, adding that Cardinal Bergoglio used to hear the confessions of these young pilgrims and celebrate Mass with them.

Marian devotion is stronger in Latin America than anywhere else, as confirmed by the constant presence of pilgrims in the shrines of Our Lady of Guadalupe in Mexico, Our Lady of Aparecida in Brazil, Our Lady of the Miracles of Caacupé in Paraguay and Our Lady of Copacabana in Bolivia. 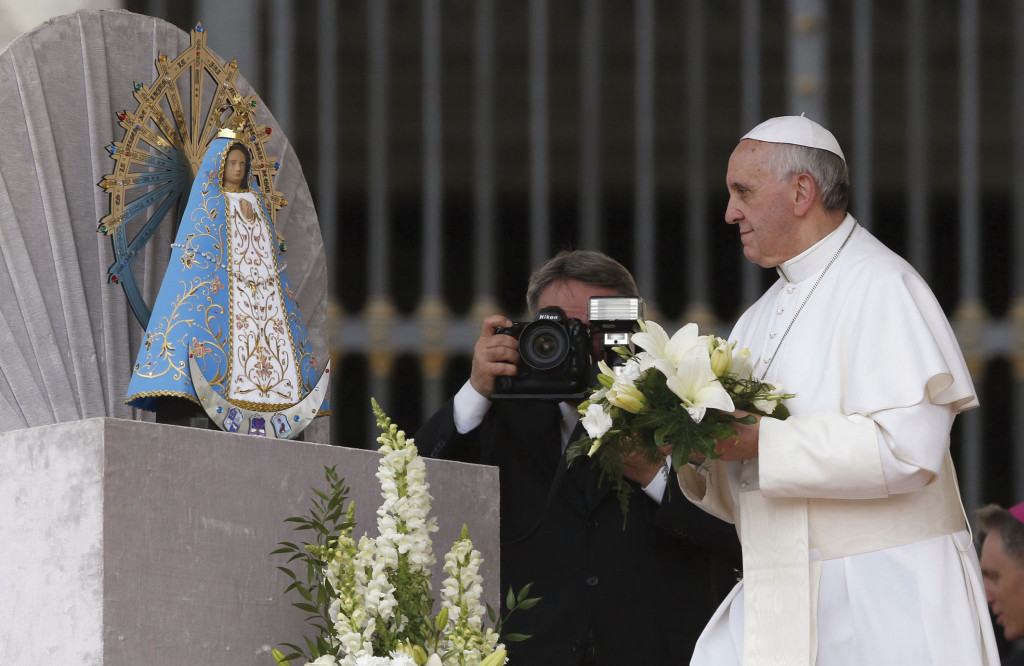 Pope Francis offers flowers before a statue of Our Lady of Lujan during his weekly audience in St. Peter’s Square at the Vatican May 8 (CNS photo)

In 1982, Blessed Pope John Paul II, impressed by the striking Marian devotion of the Argentines, was the first Pope to visit the Shrine of Our Lady of Lujàn, during his apostolic journey to Argentina, celebrating a Mass on the parvis of the shrine. The feast day of Our Lady of Lujàn is May 8th and on that date this year Pope Francis found a wooden copy of the statue of Our Lady of Luján beside the papal chair in St. Peter’s Square during the Wednesday general audience.

Even before being raised to the cardinalate, Father Bergoglio had come across an image of the Blessed Virgin on his way which made a dramatic impact on him. While studying theology in Germany in the 1980’s he developed a strong devotion to Our Lady Undoer of Knots, which would last into the subsequent years, when he was among the main promoters in Argentina of said devotion.

In fact, later on, in his capacity as auxiliary bishop and then archbishop of Buenos Aires, he encouraged the veneration of Our Lady Undoer of Knots. This devotion originated from a painting executed by the German artist Johann Georg Schidtner around 1700 and located in St. Peter am Perlach Church in Augsburg, Germany. In the painting the Virgin is shown in the act of untying a knot on a long white ribbon while crushing the serpent, which stands for evil.

The faithful commit themselves to Her intercession when confronted with a difficult situation in their lives.

After the election of Benedict XVI, Cardinal Bergoglio reportedly presented him with a chalice engraved with the image of Mary Undoer of Knots.

Also, both the coat of arms of former Cardinal Bergoglio and of Pope Francis feature a reference to Marian devotion, with a golden star, the symbol of the Blessed Virgin, which confirms the Pope’s well-known devotion to Mary.

Last April Cardinal José Policarpo, president of the Portuguese Bishops’ Conference and Patriarch of Lisbon, declared during an interview that Pope Francis had expressly asked him to consecrate his pontificate to Our Lady of Fatima, whose feast day is May 13th.

Just when the Pope celebrated the first two months of his pontificate on May 13th, at Fatima Cardinal Policarpo consecrated his pontificate to Our Lady of Fatima. In July Pope Francis will travel to his Latin America and for his first apostolic journey he wil go to Rio de Janeiro, Brazil, on the occasion of the 28th World Youth Day.

Needless to say, the Holy Father is due to visit the shrine of Our Lady of Aparecida, where as a cardinal he attended the 5th Latin American Episcopal Conference in 2007.