By Andrea Gagliarducci for CNA (link) 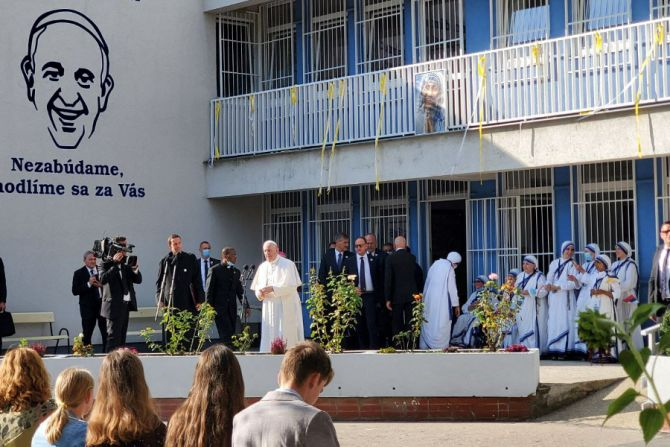 The pope toured the Bethlehem Center in Bratislava on Sept. 13, during his four-day visit to the central European country.

The center, established by the Missionaries of Charity in 1997 in a former kindergarten, provides shelter, food, and assistance to the homeless who need long-term care and would otherwise die in the streets.

The Missionaries of Charity came to Slovakia following Mother Teresa’s visits to the country and established their work of mercy in Petržalka, a neighborhood characterized by vast Soviet-style buildings.

Situated on the periphery of Bratislava, the block was once called “the Bronx of Slovakia” due to the local drug trade.

The block has found new hope in the two-floor former kindergarten building, which has a garden that is a green island amid a sea of concrete.

Prior to the live-streamed papal visit, there were few articles written about the center — even in Slovakian. That is because the nuns want no publicity about their work.

The pope was welcomed to the center by the community’s superior, who showed him around the complex. He greeted homeless people assisted by the center as members of a children’s choir performed songs in the courtyard.

In a brief address to those gathered outside, he thanked the center’s supporters.

“I also thank the moms and dads and all the kids who are here,” he said. “The Lord is with us when we are so happy together. But also in moments of trial, he is always with us. He accompanies us especially in the bad times.”

In the center’s guest book, he wrote: “I thank the Sisters of Charity for their testimony. I thank those who collaborate with them. I pray for you. Please do the same for me.”

Before departing for a meeting with Slovakia’s Jewish community, he recited a Hail Mary with those present and gave them his blessing. He left behind a gift of a porcelain image of the Madonna and Child holding a symbolic bunch of grapes.

The center is simply decorated. On its white exterior wall is a stylized portrait of Pope Francis with the words “We do not forget to pray for you” in Italian and Slovakian.

Inside, there are bare and well-kept rooms, with wooden furniture and photos of Mother Teresa everywhere. By the stairs leading up to a chapel, there is a crucifix with the inscription “I thirst” in Slovakian.

Fr. Juraj Vittek, pastor of the nearby Holy Family church, said: “Not only do the nuns go under the bridge, in the most infamous and difficult places, to recover the homeless who need help. They also live in the most extreme poverty, without owning anything. And the homeless feel this testimony as credible.”

The parish, which includes the Bethlehem Center, is large, comprising about 55,000 people — half of the inhabitants of the district, which is the largest in Central Europe. Nevertheless, the presence of the Bethlehem Center is as discreet as that of the sisters who work there.

Vittek said: “There are six to eight nuns, depending on the period. None of them is Slovakian. Currently, there are two Polish nuns, one from Bangladesh, one from Sri Lanka, one from India. But they often change. I have been a parish priest here for six years, and I have already seen three mother superiors.”

The sisters live entirely on donations and any funds they receive have to be spent again. It is almost a mystery how the center continues to operate on this basis.

It is not possible to count how many people have passed through the center. As soon as someone is better, they leave the Bethlehem Center and another person occupies their room. Some stay a week, others a few months. Nobody remains forever, but some also come back to help.

The sisters do not have a doctor in the facility. None of them is a nurse. But they have collaborators: volunteers who lend their time. And doctors are called in the case of an emergency.

The sisters also help those they welcome to reintegrate into society. They assist them as they look for a job and ensure they can continue to live a dignified life.

Some also begin a path of Christian initiation, like Milan, a middle-aged man with alcohol problems. After recovery, he left the center, began working, and lived for a while with his brother.

Continuing to struggle, he decided to embark on his Christian initiation, accompanied by Fr. Vittek. Milan will be confirmed soon, and the parish priest will be his godfather.

The center is also a reference point for the poor, who come in large numbers to receive food and help. The parish supports the center, with even children helping to distribute aid to the poorest.

“The chapel fills up on Saturday afternoon,” said Vittek. “Even the guests of the center participate in large numbers. And it is beautiful to preach here: it is enough to talk about the Gospel. There is no need to prepare sophisticated things. The poor immediately grasp the meaning of the Gospel. They live it.”