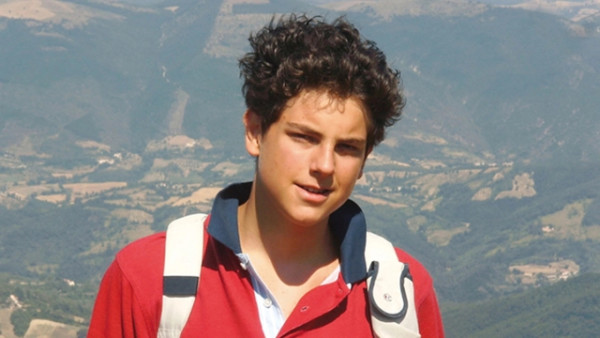 “Our goal must be the infinite”

+ Carlo was born into a wealthy—but not particularly religious—Italian family in London, England. The family moved to Milan, Italy shortly after his birth.

+ Showing a natural interest in religion, he received First Holy Communion at his own request when he was seven years old. This marked a beginning in a devotion to the Eucharist that was to remain with him his entire life.

+ Throughout his brief life, he looked towards particular saints as guides and intercessors, including Saint Tarcisius, Saint Dominic Savio, Saint Bernadette Soubirous, and Saints Jacinta and Francisco Marto.

+ In school, Carlo was a friend and defender of disabled and bullied students and he volunteered in charitable organizations that served the homeless and poor.

+ Very much a product of his times, Carlo enjoyed movies and playing video games on his PlayStation. He showed a great interest in computers and the internet and he created a website dedicated to cataloguing Eucharistic miracles. In this, he was inspired by the ideas of Blessed Giacomo Alberione and his commitment to using modern means of communication to evangelize.

+ Carlo developed M3 fulminant leukemia and he reflected, “I offer to the Lord the sufferings that will have to undergo for the Pope and for the Church.” He died from the disease on October 12, 2006.

+ Blessed Carlo Acutis was beatified in 2020. He is popularly honored as a heavenly patron of youth and of computer programmers.

+ Reflecting on the beatification of Blessed Carlo, Pope Francis remarked: “He did not ease into comfortable immobilism, but understood the needs of his time, because he saw the face of Christ in the weakest. His witness indicates to today’s young people that true happiness is found by putting God in first place and serving Him in our brothers and sisters, especially the least.”

For prayer and reflection

“Our goal must be the infinite and not the finite. Infinity is our homeland. We are always expected in heaven.”—Blessed Carlo Acutis

O God, who in your Saints have given an example and brought us protection in our weakness to help us tread the path of salvation, mercifully grant that we, who honor the heavenly birthday of blessed Carlo, may, through his example, make our way to you. Through our Lord Jesus Christ, your Son, who lives and reigns with you in the unity of the Holy Spirit, God, for ever and ever. Amen.

(from The Roman Missal: Common of Common of Holy Men and Women—For Any Saint)