The “Black Pope” Dressed in White

The “Black Pope” Dressed in White

He governs the Church like a Jesuit superior general. He listens, but decides on his own. Even a McKinsey man has been called in to study the reform of the Curia, which Francis wants to purify from corruption and from the “gay lobby.”

All that was missing was a guru from McKinsey to design that reform of the Curia which everyone expects from Pope Francis. And here he comes.

His name is Thomas von Mitschke-Collande. He is German and was the manager of the Munich branch of the most famous and mysterious company of managerial consulting in the world.

In matters of the Church, he knows his stuff. Last year he published a book with a title that was hardly reassuring: “Does the Church want to destroy itself? Facts and analyses presented by a business consultant.” The diocese of Berlin turned to him to get its accounts back in order, and the German episcopal conference asked him to draw up a plan to save on costs and personnel.

The idea of putting him to work for the reform of the Roman Curia as well came from Reinhard Marx, the archbishop of Munich, one of the eight cardinals called by Pope Jorge Mario Bergoglio to act as his advisors.

The proposal, which he welcomed enthusiastically, was made to him by Fr. Hans Langerdörfer, the powerful secretary of the German episcopal conference, a Jesuit. 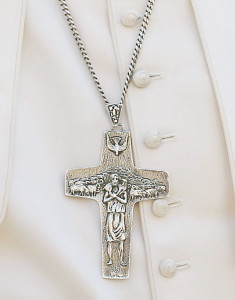 Pope Francis’ pectoral cross, which he has worn since he was a bishop (Galazka photo).

Bergoglio is also a Jesuit, and by now his actions have made it clear that he intends to apply to the papacy the methods of governance typical of the Society of Jesus, where the superior general, nicknamed the “black Pope,” has practically absolute power. His reticence in attributing to himself the name of Pope and his preference for calling himself bishop of Rome have made champions of the democratization of the Church rejoice.

But theirs is a blunder. When Francis, on April 13, appointed eight cardinals “to advise him in the governance of the universal Church and to study a project for the revision of the Roman Curia,” he selected them according to his own judgment.

If he had followed the suggestions of the preconclave, he would have found the “council of the crown” nice and ready. All he had to do was call around himself the 12 cardinals, three for each continent, elected at the end of each synod and therefore of the last as well, in October of 2012. Elected by a secret vote and representative of the elite of the worldwide episcopate, containing almost all of the influential names of the last conclave: Cardinals Timothy Dolan of New York, Odilo Scherer of São Paulo, Brazil, Christoph Schönborn of Vienna, Peter Erdö of Budapest, Luis Antonio Gokim Tagle of Manila.

But no. Pope Francis wanted his eight advisors to be chosen by himself alone, not by others. Called to answer only to him, not to an elective assembly as well.

He wanted one for each geographical area: Reinhard Marx for Europe, Sean Patrick O’Malley for North America, Andrés Rodríguez Maradiaga for Central America, Francisco Javier Errázuriz Ossa for South America, Laurent Monsengwo Pasinya for Africa, Oswald Gracias for Asia, George Pell for Oceania, plus one from Rome — not someone from the Curia, strictly speaking, but from Vatican City-State: the president of its governorate, Giuseppe Bertello.

Almost all those chosen hold or have held executive positions in continental ecclesiastical institutions. 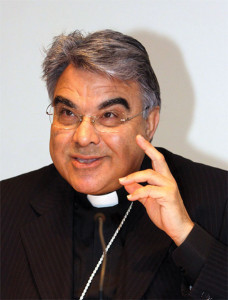 Bishop Marcello Semeraro, appointed by Pope Francis as secretary to the international commission of eight cardinals set up to advise him on reforming the Curia

One effect of this system upon the reform of the Roman Curia announced by Pope Francis is that no commission of experts has been installed with the task of elaborating a unified and complete project.

The eight cardinals are asking separately for the contribution of persons they trust, of the most disparate profiles. In addition to the McKinsey man recruited by Cardinal Marx, at least a dozen of them have been consulted, from various countries.

Others have come forward of their own initiative, as for example Cardinal Fran­cesco Coccoalmerio, president of the Pontifical Council for Legislative Texts, the designer of a project of reform centered upon a “moderator curiae” who would take care of the functioning of the machine.

In early October, the eight will be gathered around the Pope. They will deliver to him a sheaf of proposals. He will be the one to decide. Alone.

Controversy Over Remarks About a “Gay Lobby” in the Curia

On June 6 Pope Francis received six representatives of the Confederación Latinoamericana y Caribeña de Religiosos y Religiosas (CLAR), with whom, seated in a circle, he talked for an hour.

This was translated into English by the website Rorate Caeli, as follows:

In it (the conversation), Pope Bergoglio is said to have expressed himself as follows, with regard to the Roman Curia and the group of cardinals to whom he has given the task of reforming it:

“The reform of the Roman Curia is something that practically all of us cardinals asked for, in the congregations preceding the conclave. I asked for it too. I cannot do the reform myself, with all these problems of management… I am very disorganized, I have never been good at this. But the cardinals of the commission will carry it forward. There is Rodríguez Maradiaga, who is Latin American, who is its head. There is also Errázuriz, both of them very determined. The one from Munich is also very determined. They will carry it forward.”

From the mouth of Pope Francis, these words made a great sensation. The Vatican’s “gay lobby” of which “there is talk” is in essence a network of friendship and mutual support among homosexual prelates of the Curia with the purpose of occupying and maintaining important positions. And it is believed to be among the objects of the secret report on the Curia delivered to Benedict XVI — and by him to his successor — by Cardinals Julián Herranz, Jozef Tomko, and Salvatore De Giorgi.

Fr. Federico Lombardi, director of the Holy See’s press office, when asked about the publication of the account of the audience with the CLAR, said: “It was a meeting of a private nature. I therefore have no statement to make on the contents of the conversation.”

For its part, the presidency of the CLAR has lamented the unauthorized publication of notes that “were intended for the personal records of the participants.”

With regard to McKinsey, it was also the professional training ground, between 1980 and 1984 in the branches of Milan and London, of Dr. Ettore Gotti Tedeschi, the previous president of the Institute for Works of Religion, IOR, the Vatican “bank.”

Also at McKinsey, between 1987 and 1989, was the banker Alessandro Profumo, the current president of Monte dei Paschi di Siena and the former administrator delegate of Unicredit, a friend of Gotti Tedeschi and author of the preface to the book Spiriti animali. La concorrenza giusta (“Animal Spirits: Just Competition”) written by Gotti Tedeschi together with Alberto Mingardi, published by Università Bocconi in 2007.

The idea of a “moderator curiae” was launched by Cardinal Francesco Coccopalmerio, a leading canon lawyer who is currently head of the Vatican’s Office for Legislative Texts.

Hopes for a structural reform of the Roman Curia have been high since the election of Pope Francis. Proposals and suggestions have been circulating for three months now. During the General Congregations before the conclave in early March, the issue was discussed several times, from different points of view: the need for collegiality, transparency, a simpler bureaucracy, less concentration of power, perhaps fewer Italians… Experts agree that the priorities are the overhaul of the tasks and functions of the secretariat of state, the improvement of coordination among departments, but also allowing the heads of the departments to have more direct access to the Pope, as in the past… The last real reform of the Roman Curia dates back about 50 years, to Paul VI (1967). Some changes were introduced by John Paul II about 25 years ago, in the Apostolic Constitution Pastor Bonus.

Francis is facing this task in his own way. He is taking his time. He created a team of eight cardinals, representing all continents, to advise him more closely. Among them there are neither “technicians” (such as canon lawyers) nor members of the Roman Curia (except for Cardinal Giuseppe Bertello). This October, from the 1st to the 3rd, they are going to meet in Rome, but in the meantime contacts have started. The Italian Bishop Marcello Semeraro is the secretary of the “board” and is in charge of gathering contributions and ideas. Francis will also listen to suggestions from the heads of departments, whom he receives regularly. And recently he summoned all of them to meet with him.

Msgr. Semeraro has confirmed that “one thing is the doctrine of the Church and another is its structures, which are surely important but in themselves changeable. It is good that these structures are reviewed periodically….” Will the secretary of state have less power? “Let’s say it can’t be ruled out.”

Honduran Cardinal Óscar Andrés Rodríguez Maradiaga has said that on the thorny issue of the IOR, “the essential point is redefining its role, bringing clarity.”

Cardinal Francesco Coccopalmerio, a canon lawyer and president of the Pontifical Council for Legislative Texts, is not a member of the group, but he is among the writers drafting a proposal of reform. It is his the idea to create a “Moderator Curiae Romanae,” a person who would be “next to the secretary of state, but different from him (…) to make the Curia run smoothly.”

Francis’ other line of action appears in his speeches and homilies. It is his stress on humility and a spirit of service, a condemnation of careerism, an invitation for all to open themselves to the grace and mercy of God, putting themselves in His hands. For Francis, a change of heart is the first change needed.

As he said on April 24, during the morning Mass at Domus Sanctae Marthae: “But what is this Church? This our Church, because it seems not to be a human enterprise.” He added that the Church “begins there, in the heart of the Father (…), who began this story of love (…). And if we don’t understand this, we can’t understand at all what the Church is.” Indeed, “when the Church wants to be proud of its numbers and makes organizations, and builds offices and becomes a bit bureaucratic, the Church loses its principal essence and risks turning into a philanthropic organization.”

A group of the IOR’s employees took part in that ceremony, so Francis took the opportunity to add: “Everything is necessary, offices are necessary… but they are necessary to a certain extent: as a service to this story of love.” On another occasion, he said: “Let us keep our gaze fixed on the Cross: any authority in the Church is found where the One who is the Lord becomes a servant to the point of the total gift of Himself.”