By Hannah Brockhaus for CNA (link) 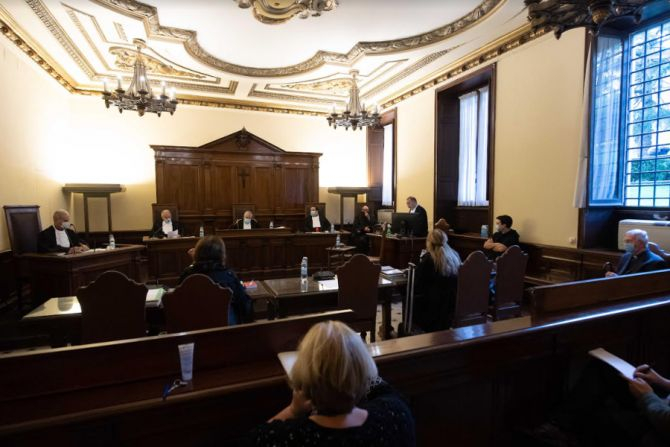 The first hearing of the abuse trial takes place at the Vatican court Oct. 14, 2020./ Vatican Media.

The Vatican tribunal cleared a priest who formerly served as a papal altar boy and the ex-rector of a Vatican-based youth seminary of crimes on Wednesday.

Defendant Fr. Gabriele Martinelli, 29, was acquitted of charges of violent sexual assault alleged to have taken place at the Pius X pre-seminary. The school’s former rector, 72-year-old Fr. Enrico Radice, was cleared of charges of cover-up.

The ruling came at the end of a year-long trial for alleged abuse at the Pius X pre-seminary, a residence in Vatican City for about a dozen boys aged 12 to 18 who serve at papal Masses and other liturgies in St. Peter’s Basilica and are considering the priesthood.

The Vatican announced in May that Pope Francis had decided to move the pre-seminary outside of Vatican City State beginning in September.

Tribunal president Giuseppe Pignatone handed down the decision on Oct. 6. The court said that Martinelli could not be punished for crimes while he was a minor (in Vatican law, before his 16th birthday), clearing him of charges of abuse before Aug. 9, 2008.

For accusations of sexual violence from Aug. 9, 2008, to March 19, 2009 (the period before the alleged victim turned 16 years old and was no longer a legal minor), the court said the sexual acts “were proven in their materiality,” but lacked certainty that they were coerced.

In this case, the tribunal continued, the acts would constitute a different crime, “the corruption of minors,” but the statute of limitations had lapsed by four years when the lawsuit was filed in 2018.

The religious group Opera don Folci, which runs the pre-seminary and is overseen by the Diocese of Como, was a defendant in a civil suit regarding the abuse charges. No decision in the civil suit was announced on Oct. 6.

Attorneys for the defendants, agreeing with the ruling on Oct. 6, said that “there were very many doubts” about whether the alleged crimes took place.

A lawyer for Martinelli noted that the man who said he had been assaulted testified in court that it sometimes took place in his room at the pre-seminary and sometimes in the presence of others. But in the course of the trial, former roommates of the alleged victim said they had never heard or saw anything.

“So, it was clear,” the lawyer said, “there were doubts about the fact that it happened.”

Across 13 hearings starting last year, Vatican judges listened to testimony from the defendants, the alleged victim, former students and priest teachers at the pre-seminary, and others.

The man who made the allegations, identified only as L.G., claimed that Martinelli, who is seven months and nine days older, sexually abused him, starting about two months after he moved to the pre-seminary, when he was 13 years old.

The initial abuse allegation was first revealed by Italian journalists in 2017, and then reported by the Associated Press in 2018.

The investigation into the abuse allegations began in November 2017, but according to Vatican law at the time, the complaint had been made outside the statute of limitations.

In June 2019, however, Pope Francis made a special provision allowing the case to proceed.

In September 2019, the Vatican’s Promoter of Justice requested the indictment of the two accused men.

Martinelli, who was ordained a priest for the Diocese of Como, northern Italy, in 2017, always denied the allegations against him, calling them “unfounded” and intended to “strike” at the pre-seminary.

Radice, who was accused of covering up the allegations of abuse, said that he never heard or saw anything like sexual assault in the pre-seminary, and he argued that accusers had made up the story out of “economic interests.”

“No one has ever told me about abuse, not the students, not the teachers, not the parents,” the former rector declared on the stand last year.