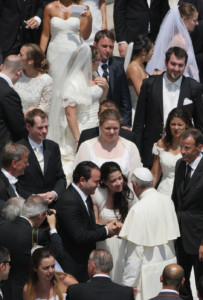 Amid increasing speculation that the Catholic Church might make it easier for divorced and remarried members to receive Communion, the Vatican’s highest doctrinal official on October 22 reaffirmed Church teaching barring such persons from the sacrament without an annulment of their first, sacramental marriage. But Archbishop Gerhard Müller, prefect of the Congregation for the Doctrine of the Faith, acknowledged that many Catholics’ first marriages might be invalid, and thus eligible for annulment, if spouses had been influenced by prevailing conceptions of marriage as a temporary arrangement. The archbishop’s words appeared in a 4,600-word article published in the Vatican newspaper.

Speculation about a change in practice has grown since Pope Francis told reporters accompanying him on his plane back from Rio de Janeiro in July that the next Synod of Bishops would explore a “somewhat deeper pastoral care of marriage,” including the question of the eligibility of divorced and remarried Catholics to receive Communion.

Pope Francis added at the time that Church law governing marriage annulments also “has to be reviewed, because ecclesiastical tribunals are not sufficient for this.”

Such problems, he said, exemplified a general need for forgiveness in the Church today. “The Church is a mother, and she must travel this path of mercy, and find a form of mercy for all,” the Pope said.

The Vatican announced October 8 that an extraordinary session of the Synod of Bishops will meet October 5-19, 2014, to discuss the “pastoral challenges of the family in the context of evangelization.”

Müller’s article was originally published in a German newspaper June 15. Its republication in the Vatican newspaper — simultaneously in five languages including English — seemed intended to temper expectations of change.

The archbishop said a “case for the admission of remarried divor­cees to the sacraments is argued in terms of mercy,” but said such an argument “misses the mark” in regard to the sacraments, since the “entire sacramental economy is a work of divine mercy and it cannot simply be swept aside by an appeal to the same. An objectively false appeal to mercy also runs the risk of trivializing the image of God, by implying that God cannot do other than forgive,” he wrote. “The mystery of God includes not only his mercy but also his holiness and his justice. If one were to suppress these characteristics of God and refuse to take sin seriously, ultimately it would not even be possible to bring God’s mercy to man.”

The prefect’s article also addressed the Eastern Orthodox practice of allowing second or third marriages even when the first is sacramentally valid, a practice Pope Francis mentioned without endorsing it when speaking to reporters in July.

“This practice cannot be reconciled with God’s will, as expressed unambiguously in Jesus’ sayings about the indissolubility of marriage,” the archbishop wrote, noting that it thus poses an obstacle to ecumenism.

Müller also ruled out the argument that “remarried divorcees should be allowed to decide for themselves, according to their conscience, whether or not to present themselves for Holy Communion.”

“If remarried divorcees are subjectively convinced in their conscience that a previous marriage was invalid, this must be proven objectively by the competent marriage tribunals,” he wrote. “Marriage is not simply about the relationship of two people to God, it is also a reality of the Church, a sacrament, and it is not for the individuals concerned to decide on its validity, but rather for the Church, into which the individuals are incorporated by faith and baptism.”

Yet the prefect acknowledged that contemporary social and cultural ideas of marriage are relevant to the validity of a sacramental union, to the degree they influence the spirit with which the spouses undertake it.

“Today’s mentality is largely opposed to the Christian understanding of marriage, with regard to its indissolubility and its openness to children,” he wrote. “Because many Christians are influenced by this, marriages nowadays are probably invalid more often than they were previously, because there is a lack of desire for marriage in accordance with Catholic teaching, and there is too little socialization within an environment of faith. Therefore assessment of the validity of marriage is important and can help to solve problems.”

But where the requirements for an annulment are lacking, he wrote, civilly remarried Catholics may receive Communion only if they promise to abstain from sexual relations, living together “as friends, as brother and sister.”