“Where there is suffering, there is Christ”

“Where there is suffering, there is Christ”

Christians must help the people of Syria because “where there is suffering, Christ is present,” Pope Francis told representatives of Catholic aid agencies working in Syria and with Syrian refugees in neighboring countries.

“How much suffering, how much poverty, how much pain; and it’s Jesus who suffers, who is poor, who is thrown out of his country,” the pope said June 5 during a meeting with the representatives who were holding a coordinating meeting at the Vatican.

Pope Francis said it is part of “the Christian mystery” that when the faithful see what is going on in Syria, “we see Jesus suffering in the inhabitants of the beloved Syria.” 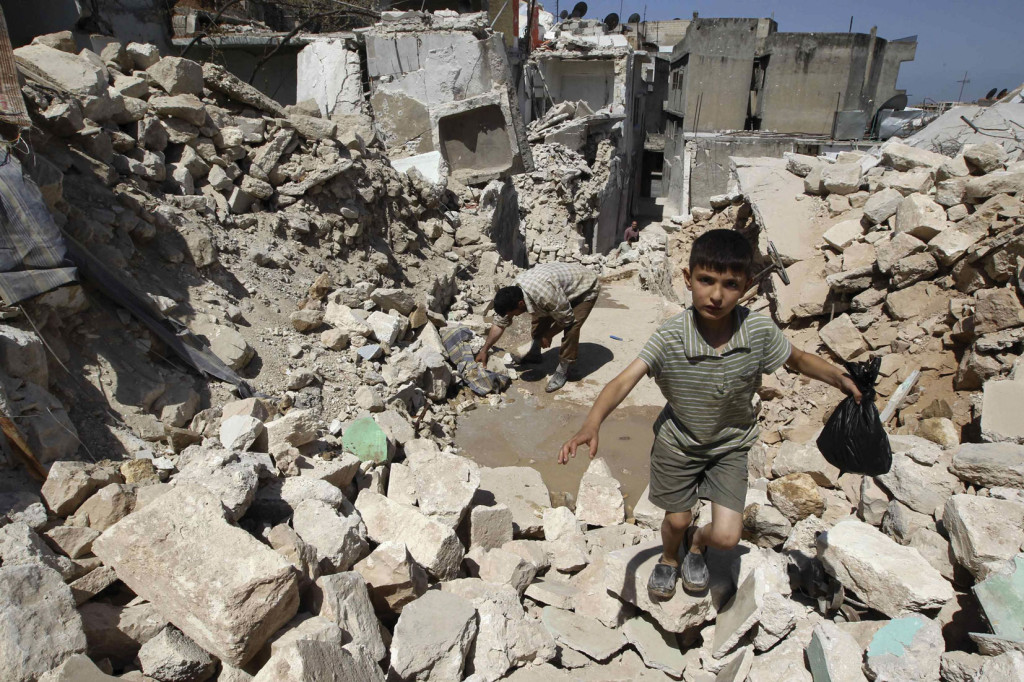 A boy walks on the rubble of buildings damaged by missiles fired by Syrian air force fighter jets in Salqin, Syria, May 28, 2013.

“We cannot turn our backs on situations of great suffering,” he told participants at the meeting he convoked June 4-5. “The weapons must be silenced.”

The meeting was held under the auspices of the Pontifical Council Cor Unum, which promotes and coordinates Catholic charitable giving. The pope wanted the aid agencies to “respond to the continuing deterioration of the already serious humanitarian situation in the country and among the refugees,” said Msgr. Giampietro Dal Toso, council secretary.

Msgr. Dal Toso said it is impossible to get firm figures on all the victims of the conflict, which has been going on for more than two years as rebels fight to oust President Bashar Assad. “Some 7 million people are requesting help; 4.5 million are internally displaced, while the number of refugees is approaching 2 million,” Msgr. Dal Toso said.

The 22 Catholic agencies participating in the meeting — including the U.S. bishops’ Catholic Relief Services — will share information with each other through Caritas Lebanon, Msgr. Dal Toso said. 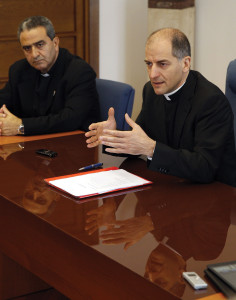 Msgr. Giampietro Dal Toso, secretary of the Pontifical Council Cor Unum, speaks during a briefing on Syria at the Vatican June 5 (CNS photo)

Father Simon Faddoul, president of Caritas Lebanon, told reporters June 5 that the 22 agencies estimate they have spent a total of 25 million euros (about $32.7 million) on aid since the crisis began in 2011 and have supported some 400,000 Syrians. The Catholic aid included $1 million sent last October by Pope Benedict XVI and members of the world Synod of Bishops, who were meeting at the Vatican.

Pope Francis told the aid agencies, “In the face of the ongoing and overwhelming violence, I strongly renew my appeal for peace.”

He encouraged the international community to pursue its stated goal of promoting dialogue to bring a negotiated end to the conflict. At the same time, he said, “the Church feels called to give its humble, yet concrete and sincere witness to the charity it has learned from Christ, the good Samaritan.”

Pope Francis praised Lebanon, Jordan and Turkey for welcoming refugees fleeing violence in Syria and he asked the international community to pitch in to provide humanitarian relief for them and for the displaced still inside Syria.

The coordinated work of the Catholic charities, he said, is a sign of communion within the Church, but is also a witness to the world that people of different backgrounds can live and work together in peace.

“For the Holy See, the work of Catholic charitable agencies is highly significant,” he said. “Assisting the Syrian population without regard for ethnic or religious affiliation is the most direct way to contribute to peace and to building a society open to all its different components.”

Through the aid groups, which included the national Caritas organizations of Syria, Lebanon, Jordan and Turkey, as well as Caritas Middle East and the

U.S.-based Catholic Near East Welfare Association, Pope Francis also expressed his solidarity with the Christian communities in Syria and throughout the region.

“The Church supports its members who face particular difficulties today,” he said. “They have the great task of continuing to make Christianity present in the region in which it was born.”