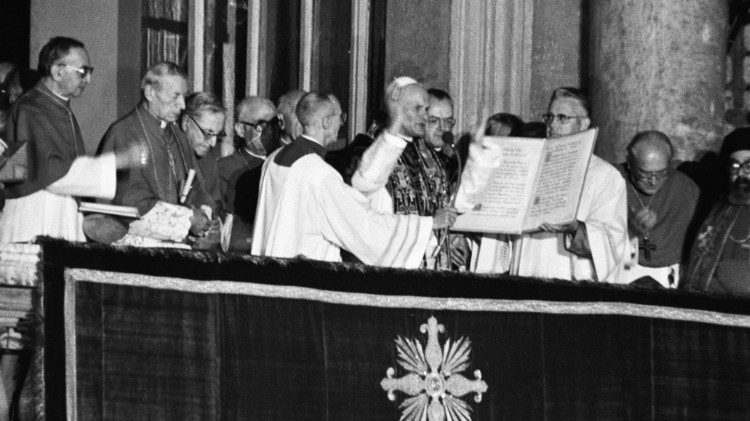 The anniversary of John Paul II’s election to the papacy falls this year on the centenary of his birth: two events celebrated by Churches around the world. The Vatican Publishing House and the Osservatore Romano preserve the memorable moments of that unforgettable evening of 16 October 1978.

October 16, 1978, 42 years ago, was a Monday. It was already dark when, at 6.18 p.m., white smoke billowed out from the chimney of the Sistine Chapel, after black smoke had risen seven times before.

After a little less than half an hour, at 6:45 p.m., Cardinal proto-deacon Pericles Felici announced the election of Cardinal Karol Wojtyla, under the name of John Paul II, as the 264th Pope of the Catholic Church, the Bishop of Rome and successor of Peter.

It seemed at first that the 58th Archbishop of Krakow wanted to call himself Stanislaus I in honor of the patron saint of Poland. When it was pointed out to him that it was a name that did not fit into the Roman tradition, Wojtyła chose John Paul in memory of his predecessor, Albino Luciani, who passed away after only 33 days of his Pontificate.

First: the memory of John Paul I

Many images of that October evening 42 years ago remain in our collective memory, thanks also to the splendid photos taken by the L’Osservatore Romano photoshoot (you can request the photos here).

A few minutes before 7 pm, looking out from the Loggia of the Blessings of St. Peter’s Basilica, the new Pope presented himself to the crowd gathered in the Square. He recalled everyone’s pain “following the death of our beloved Pope John Paul I” and emphasized that the cardinals had elected the new bishop of Rome, after so many Italians in previous centuries, “from a country far… far away, but always so close for communion in faith and the Christian tradition.” He recounted his fear in receiving the nomination, which he accepted out of obedience to Jesus and “in total trust in his Mother, Our Lady Most Holy.”

Celebrations and initiatives for the centenary of his birth

Even today everyone around 50 years old and over remember the emotion of listening to the first words of a non-Italian Pope following many centuries. This is an emotion that the centenary year of the birth of St. John Paul II further echoes thanks to the many celebrations planned by the ecclesial communities in the world.

Naturally, there was a celebration in Karol Wojtyla’s native land, which on October 11 last year, spent the 20th Papal Day under the motto Totus Tuus.

The Vatican Publishing House also celebrated the centenary with the publication “St. John Paul II – A Celebration in Words and Images” (you can buy the book for the 100th anniversary of the birth of Pope Saint John Paul II here).

Introducing the Church into the third millennium

The memories of 16 October, 42 years ago, are intertwined with the very long trajectory of a historic pontificate and refers to that strong and free personality who was able to establish a direct and engaging relationship with the Christian people, and even beyond, with the whole world.

The Polish Pope would later say that the then-primate of his country, Cardinal Wyszynski, had told him in those days that, as Pontiff, he would be called to introduce the Church into the third millennium. And so it came to pass.

Despite the assassination attempt and illnesses, St. John Paul II led a Church not closed in on itself, but open to face the challenges of the time with courage: from “Do not be afraid” in the first days of his pontificate to “Duc in altum! – Guide the boat offshore!” of later years, Pope Wojtyla gave us the passion of the proclamation of Christ, without fear, for a vast and troubled world, but always loved by God, even in the third millennium.