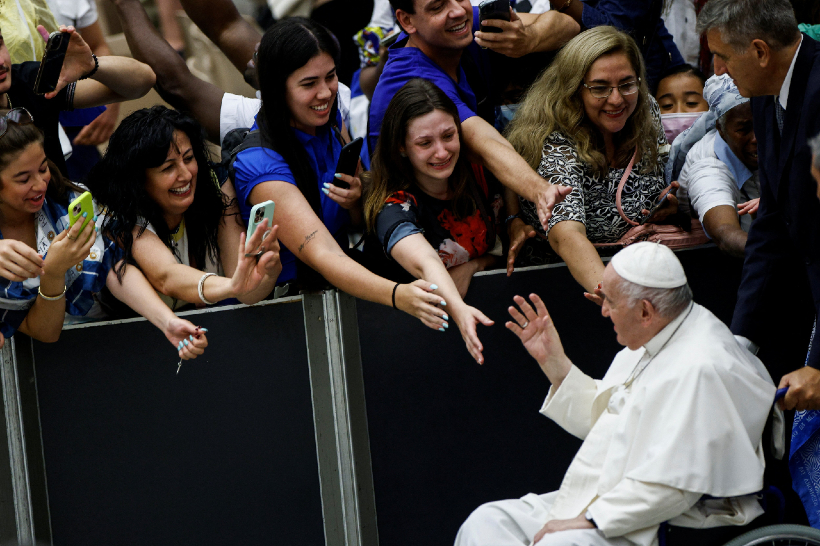 At the weekly General Audience, Pope Francis concludes his catechesis on the value of old age, and reflects on how the Blessed Virgin Mary reveals to us God’s promise of new life in death.

Pope Francis concluded his General Audience catechesis series on the value of old age with a reflection on the Assumption into heaven of Jesus’ mother, Mary.

He took his cue from the Letter to the Romans (Rm 8:22-24), in which St. Paul compares the pain of childbirth to the “redemption of our bodies”.

The Pope said the Blessed Virgin Mary’s Assumption also illuminates our own destination, though depicted differently in the Latin and Oriental traditions.

“In the West, we contemplate her lifted up, enveloped in glorious light,” he said. “In the East, she is depicted reclining, dormant, surrounded by the Apostles in prayer, while the Risen Lord holds her in His hands like a child.”

Pope Francis linked Mary’s passing into heaven with the mystery of Christ’s Resurrection.

“In the divine act of the reuniting of Mary with the Risen Christ, the normal bodily corruption of human death is not simply transcended, the bodily assumption of the life of God is anticipated.”

Death, said the Pope, is a little like a “second birth”, since when we emerge from our mother’s womb, we are the same person we were before, just as we are born into heaven in death yet remain ourselves.

“It is analogous to what happened to Jesus,” noted the Pope. “The Risen One is still Jesus: He does not lose His humanity, His experience, or even His corporeity, because without it He would no longer be Him.”

This truth, he added, is revealed when the Risen Jesus appears to His disciples after Easter and shows them His wounds and remains in relationship with them.

The Pope went on to point out that Jesus often described heaven in terms of a wedding feast or a celebration with friends.

He said these images help us to look forward in hope to our next life and “God’s creative love”.

“In our old age, the importance of the many ‘details’ of which life is made—a caress, a smile, a gesture, an appreciated effort, an unexpected surprise, a hospitable cheerfulness, a faithful bond—becomes more acute.”

Pangs and promise of our risen body

Old age, said Pope Francis, is where wisdom is woven, which in turn illuminates the lives of younger generations and the entire community.

“Our whole life appears like a seed that will have to be buried so that its flower and its fruit can be born,” he said. “It will be born, along with everything else in the world.”

However, noted the Pope, death and rebirth in heaven is “not without labour pangs, not without pain”.

Yet, he concluded, “the life of the risen body will be a hundred and a thousand times more alive than we have tasted it on this earth.”