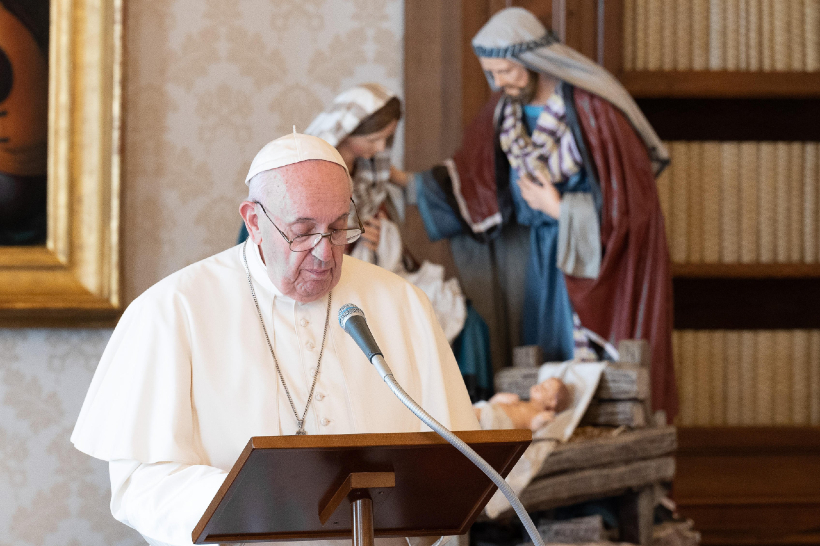 Pope Francis leads the recitation of the Angelus prayer Dec. 27, 2020, from the library of the Apostolic Palace. Marking the feast of the Holy Family, Pope Francis announced the Catholic Church will observe a special year dedicated to the family from March 19, 2021, to June 26, 2022. (CNS photo/Vatican Media)

At the Angelus prayer on the feast of Saint Stephen, Pope Francis urges Christians to witness to faith in Christ, by repaying evil with good and breaking the cycle of hatred with love.

Pope Francis prayed the Angelus at noon on Saturday, as the Church marks the feast of St. Stephen.

The Pope said the saint was the first person to witness to Jesus with his life, making him the first Christian martyr, which means “witness”.

St. Stephen was “the first of a host of brothers and sisters who continue even today to bring the light into the darkness.” These men and women, added the Pope, do not succumb to violence but break the chains of hatred with meekness and love.

“In the world’s nights, these witnesses bring God’s dawn,” he said.

Pope Francis said St. Stephen shows the path for all other Christians, which is “imitating Jesus.”

Yet, added the Pope, one might ask: “are these witnesses to goodness really necessary when the world is rampant with wickedness?” The day’s First Reading (Acts 6:8-10; 7:54-59) offers the answer in a tiny detail, he said.

As Stephen lay dying from his wounds, he prayed that God might forgive his murderers. “The text says that among those for whom Stephen prayed and whom he forgave there was ‘a young man named Saul’, who ‘was consenting to his death.’”

Saul, noted the Pope, would become Paul, the greatest missionary in history. “Paul was born by God’s grace, but through Stephen’s forgiveness, his witness. That was the seed of his conversion. This is the proof that loving actions change history.”

Even small acts of love can change the course of history, said the Pope, because God “guides history through the humble courage of those who pray, love, and forgive.”

Pope Francis said we too can make a difference through the ordinary events of daily life.

“We are called to bear witness to Jesus right where we live, in our families, at work, everywhere,” he said, “even just by giving the light of a smile and fleeing the shadow of gossip and tattle-telling.”

He also offered a piece of advice. Rather than complaining when we see something wrong, we should pray for the person who made the mistake.

“Saint Stephen, while he was on the receiving end of the stones of hatred, reciprocated with words of forgiveness. He thus changed history.”

Each of us, said Pope Francis, can turn evil into good when we return love for hatred.

And he urged everyone to pray for the many Christians who are facing persecution for their faith in Jesus.

“Let us entrust these brothers and sisters to the Virgin Mary, that they might respond with meekness to oppression and that, as true witnesses to Jesus, they might conquer evil with good.”