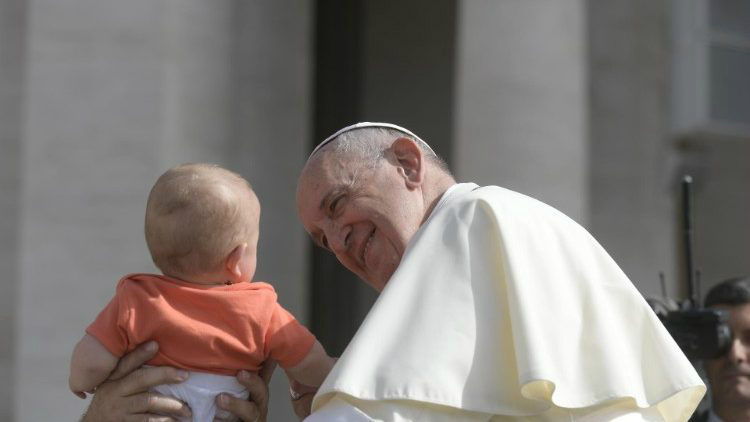 Pope Francis emphasizes the importance of community and the reconciling power of God’s love during his General Audience in St. Peter’s Square.

Speaking to the pilgrims gathered in St. Peter’s Square for the Wednesday General Audience, Pope Francis explained that communion and ‘freedom from oneself’ are part of the Christian DNA.

In his catechesis, which continues a new cycle dedicated to the Acts of the Apostles, the Pope warned against the temptation of being self-referential and invited the faithful never to fear diversity.

He reflected on the fact that Christ’s choice of twelve Apostles shows the continuity between the Church and the people of Israel. After the defection of Judas, the Apostles, he said, were conscious that his place in the Twelve had to be taken by another.

So, he explained, guided by Peter, the community as a whole joined in prayer to discern the Lord’s choice of Matthias.

The Pope said that Jesus had told his disciples that they would be known “by their love for one another”, and explained that this visible communion of the Apostles was their first form of witness to the Risen Lord and his saving love.

He noted that the disciples knew perfectly well that the Resurrection of Christ was not “one event among others,” but the source of new life.

He said that while “Judas preferred death to life” the eleven, instead, chose life and salvation, and took on the responsibility of passing it down through history, from generation to generation, from the people of Israel to the Church.

Pope Francis continued pointing out that the abandonment of one of the twelve created a wound in that community body, and said it became necessary to pass the task on to another and to reconstitute the group of twelve.

This, he explained, inaugurated the practice of community discernment, which consists in “seeing reality through the eyes of God, in the perspective of unity and communion,”  highlighting the fact that “communion overcomes divisions, isolation, a mentality that prioritizes private space”.

“In the Acts of the Apostles, the Twelve manifest the style of the Lord,” he said, explaining that the visible communion of the Apostles was their first form of witness to the Risen Lord and his saving love.

“We too,” Pope Francis said, “need to rediscover the beauty of witnessing to the Risen One, going beyond self-referential attitudes, resisting the temptation to keep God’s gifts to ourselves, and never yielding to mediocrity.”

The Pope concluded his catechesis urging the faithful to ask the Lord to help them bear witness to the reconciling power of that love by our unity, which – he said –  triumphs over pride and divisiveness, and creates one People of God out of diversity.

Safeguard life in every moment

During his greetings to a group of Polish pilgrims who participated in a ‘Procession for Life’ on Sunday, the Pope issued an appeal to always respect and safeguard the sanctity of life.

“Life is sacred because it is a gift from God,” he said, urging Christians “to defend and serve life” from the moment of conception until “old age, when it is marked by infirmity and suffering”.

“It is not lawful to destroy life, to make it the object of experiments or false conceptions,” he said.