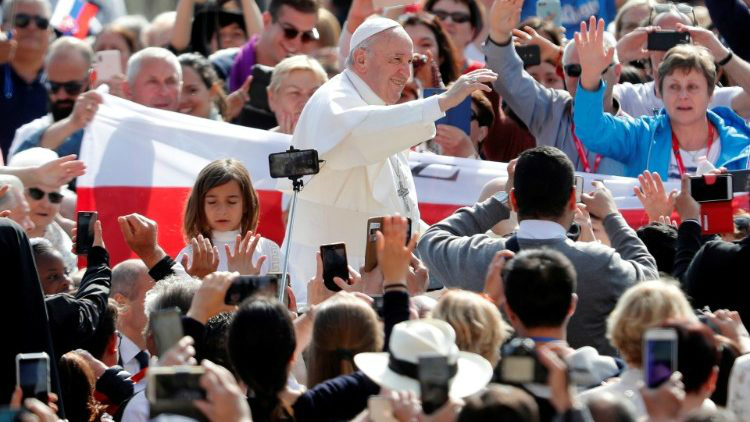 Pope Francis at the weekly General Audience in the Vatican, May 22, 2020.

At Wednesday’s General Audience, Pope Francis concludes his series of catechesis on the “Our Father” prayer, saying it is the Holy Spirit who is the teacher and protagonist of true prayer.

In his General Audience this week, Pope Francis concluded his series of catecheses on the Lord’s Prayer, “Our Father”, which he began on December 5.

The Pope noted that Christian prayer that is “born of the audacity to call God by the name of ‘Father’”, expresses a “filial intimacy” into which we are introduced by the grace of the Holy Spirit.  He cited a few examples from the New Testament where the various expressions of Jesus’ prayers recall the text of the “Our Father”.

In Mark’s Gospel, when Jesus prays,  “Abba, Father, all things are possible to you. Take this cup away from me, but not what I will but what you will”, we discover His filial trust in the Father amidst the darkness, fear and anguish of the night of Gethsemane, where He asks that the Father’s will be fulfilled.

Not without brothers and sisters

Elsewhere, Jesus teaches his disciples to cultivate a spirit of prayer that is insistent, but especially that bears the memory of our brothers and sisters, especially when we have difficult relationships with them.

In this regard, Jesus says in Mark’s Gospel, “When you stand to pray, forgive anyone against whom you have a grievance, so that your heavenly Father may in turn forgive you your transgressions.”

The Pope noted that in the writings of Saint Paul we do not find the text of the “Our Father”, but His presence emerges in that stupendous synthesis where the invocation of the Christian is condensed into a single word: “Abba! Father!” (cf. Rom 8:15; Gal 4:6).

In Luke’s Gospel, Jesus fulfills the request of the disciples and teaches them how to pray to the Father.

Pope Francis noted that the New Testament as a whole indicates that the first protagonist of all Christian prayer is the Holy Spirit.

“We could never pray without the power of the Holy Spirit. It is He who prays in us and moves us to pray well.”

The Spirit, the Pope explained, is both the teacher and protagonist of true prayer.  It is He who breathes into the heart of each one of Jesus’ disciples, enabling them to pray as children of God, which they truly are in Baptism.

“The Spirit makes us pray in the ‘furrow’ that Jesus dug for us,” the Pope said, explaining that by grace Christian prayer attracts us to the dialogue of love of the Most Holy Trinity.

Core of every prayer –“my” intimacy

The Holy Father observed that sometimes Jesus uses expressions that are very far from the text of the “Our Father”.  For example, while dying on the cross He cried out, “My God, my God, why have you forsaken me?” (Mt 27:46).

Certainly, the Pope said, the heavenly Father cannot abandon His Son.  “Yet His love for us, sinners,” the Pope said, “has brought Jesus to this point: to the point of experiencing the abandonment of God, His distance because He has taken upon Himself all our sins.”

But even in His anguished cry, “My God, my God”, the Pope noted, the “my” remains the “core of the relationship with the Father” and the “core of faith and prayer”.

Pope Francis noted that with this nucleus, a Christian can pray in any situation.   All the prayers of the Bible, especially the Psalms, and the prayers throughout millennia of history have this nucleus.

The Holy Father urged that we never cease to speak about our brothers and sisters in humanity to the Father, so that none of them, especially the poor, may remain without consolation and a portion of love.

But to pray genuinely, the Pope said, “we must make ourselves little, so that the Holy Spirit may come into us and guide us in prayer.”