Pope at Audience: Holy Spirit is the protagonist of evangelization

Pope at Audience: Holy Spirit is the protagonist of evangelization 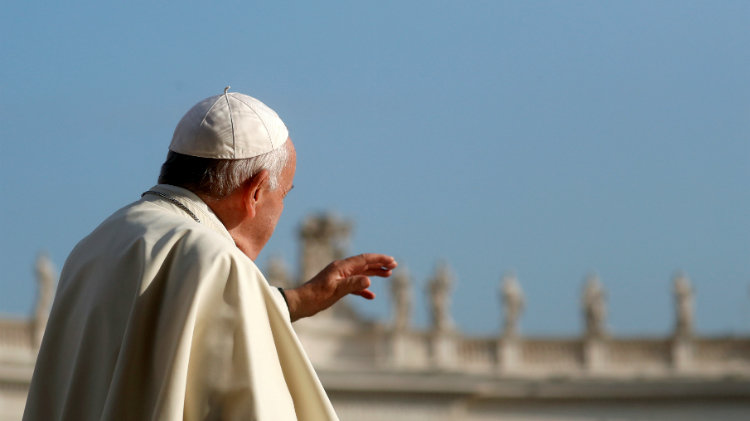 Continuing his catechesis on the Acts of the Apostles at Wednesday’s General Audience this week, Pope Francis explains on how the Holy Spirit leads the deacon Philip to help the senior official of the Queen of Ethiopia to embrace Christ.

Pope Francis began his catechesis, explaining how after the persecution of Christians following the martyrdom of Stephen, the spread of the Gospel appeared to suffer a setback.  As a result, many Christians dispersed elsewhere.

But persecution that appears to be the hallmark of Christ’s disciples, the Pope explained, “instead of extinguishing the fire of evangelization, feeds it even more”.

The deacon Philip, who was proclaiming the Gospel along with healing and casting out evil spirits in Samaria,  is impelled by the Holy Spirit to meet a stranger with a heart open to God.  With enthusiasm, he set off on a deserted and dangerous road to meet a senior official of the Queen of Ethiopia, the administrator of her treasures.  The Jewish proselyte, a eunuch, was traveling home after worshipping in Jerusalem.   In his carriage, he was reading a passage from the Prophet Isaiah on the “servant of the Lord”, but understood nothing.

Humility and Word of God

Philip approached the carriage and asked him if he understood the passage.  The Ethiopian said he could not unless someone guided him.   The Pope noted that this powerful man recognized the need to be guided in order to understand the Word of God. “He was the great banker, he was the minister of economy, he had all the power of money,” the Pope noted, “but he knew that without the explanation he could not understand.  He was humble.”

Drawing a lesson from this conversation, the Holy Father said “it is not enough to read Scripture, it is necessary to understand its meaning, to find the “juice” going beyond the “rind”, to draw the Spirit that animates the letter.”

In this regard, he recalled Pope Benedict XVI on exegesis, who said that the true reading of Sacred Scripture is not just a literary phenomenon, it is the movement of one’s existence. Pope Francis explained that entering the Word of God means to be willing to go beyond one’s own limits to encounter God and to conform oneself to Christ who is the living Word of the Father.

In fact, the Holy Father continued, Philip helped the Ethiopian understand that the “meek suffering servant” he was reading about was none other than Christ whom the whole Church was proclaiming.   The Ethiopian finally recognized Christ and asked for Baptism and professed his faith in the Lord Jesus.

Holy Spirit – the protagonist of evangelization

“The protagonist of evangelization is the Holy Spirit,” the Pope repeated, adding it is a sign that one is a Christian, an evangelizer and a joyful martyr.  In conclusion, the Holy Father urged that the Holy Spirit make Christians proclaim the Gospel not to attract others to themselves but to Christ, that they may make room for God’s action and make others free and responsible before the Lord.